Book a holiday to Utah with award-winning American Sky by 31 January and save £250 per booking.

It's all about the red-rock landscapes, sandstone deserts, snow-covered peaks, and traces of dinosaurs in Utah - the epic western playground that’s as famous for its champagne-powder ski slopes as for its Mighty Five national parks. We check out Utah’s top 10 best small towns, all of which make fantastic detours for adventurous road-tippers working their way through the ever-changing (and sometimes surreal) landscape. 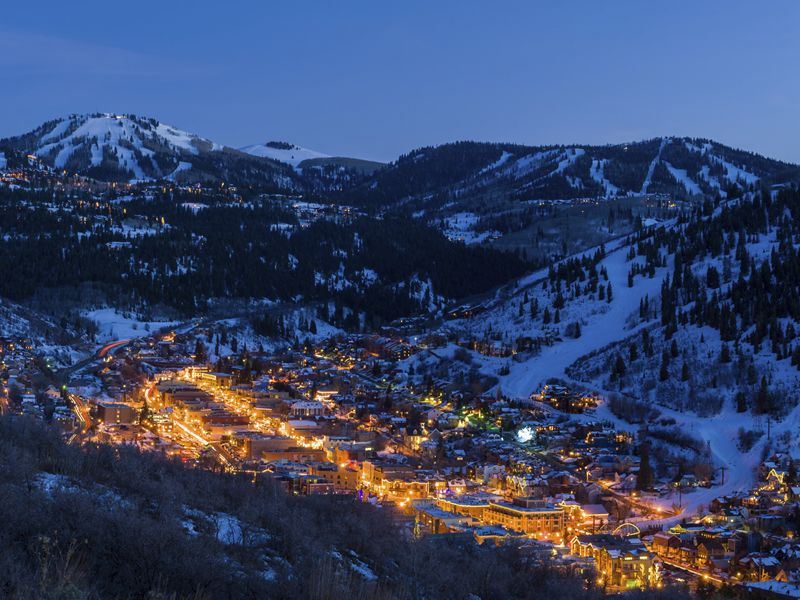 Jurassic thrills come fast and furious in Vernal - the Uintah Basin boom-and-bust town that’s celebrated for its mountain meadows, bare sandstones, high desert canyons, alpine forests, and bizarrely-named cycle trails (Slippery When Wet, Handsome Cabin Boy, Serendipity). Given this is the gateway to Dinosaurland, most make a beeline here to dig up fossils, take selfies with dino replicas at the Utah Field House of Natural History State Park Museum, and visit the 211-acre Dinosaur National Monument - the prehistoric showstopper that’s home to 1,500 bones (all of which are in their original resting place). Once you’ve eyed up the Allosaurus, Apatosaurus, Camarasaurus, Diplodicus and Stegosaurus remains, factor in a visit to Green River for white-water rafting and fly-fishing, Steinaker State Park and Red Fleet State Park for waterskiing, Flaming Gorge National Recreation Area for boating, and Ashley National Forest for camping (keep your eyes peeled for bears, mountain lions, moose, and antelope). Should time allow, head to Vernal’s fascinating Uintah County Western Heritage Museum for its First Ladies Exhibit - a quirky collection of porcelain dolls that honour over three dozen women of the White House. 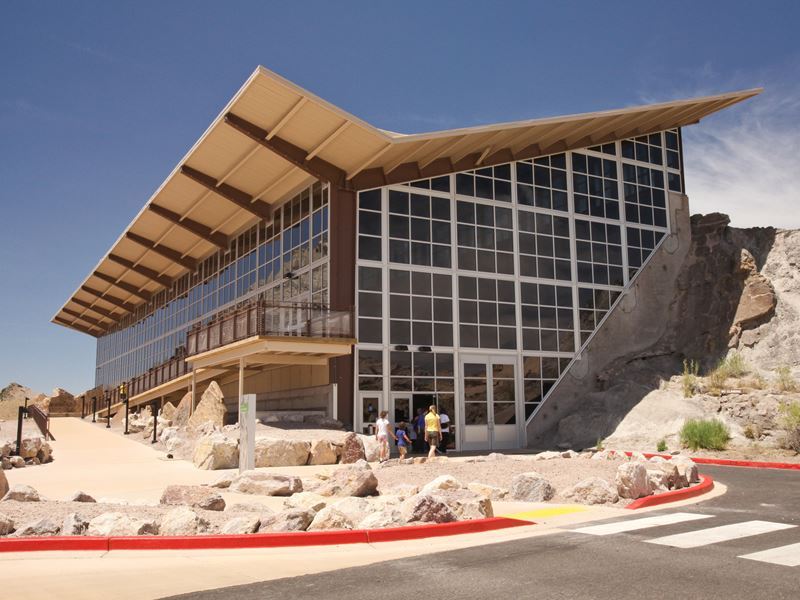 Named in honour of the thirteenth US President, Millard Fillmore, this Millard County town at the foot of the Pahvant Mountain Range was the designated capital of Utah Territory before the legislative assembly lost interest and opted for Salt Lake City. Nowadays, it’s most famous for its ATV Jamboree, mushroom production (six million pounds are spawned, seeded and harvested here each year), and Utah Territorial Statehouse that stands as the state’s oldest existing governmental building (it’s now a museum). Must-dos include hitting the Historic Walking Trail, riding at speed (where legal) on the ATV trails, hiking in the Pahvant Valley, playing nine-holes at Paradise Golf Course, and visiting Cove Fort - the historic site established in 1867 as a stop-off for clergy, miners, traders and postal workers travelling along the Mormon Corridor. For those who rather fancy prying fossils, gems and minerals out of the ground with a hammer and loupe, the area’s rockhounding is top-notch. Assuming you’ve secured a permit to collect artefacts on public lands, your best bets are Topaz Mountain for topaz, Sunstone Knoll for sunstone, Black Rock for obsidian, Agate Hills for agate, and Amasa Valley for small quantities of placer gold. 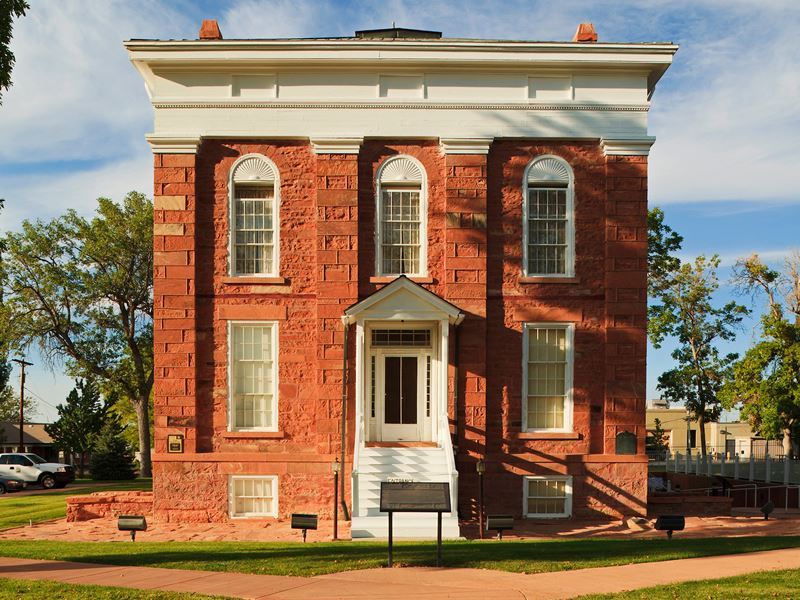 Thrillseekers’ stomping grounds don’t get much cooler than Blanding - the little southeastern Utah town whose big “Base Camp To Adventure” slogan is very much on-point. Set between Lake Powell, Bridges National Monument, and Arches National Park, this so-called Gateway to Canyon Country really does have it all; biking in the Abajo Mountains, hiking in Mule Canyon, and challenging ATV trails for those who fancy flooring it through a maze of valleys and plateaus. Not-to-be-missed sights include Hovenweep National Monument for its six prehistoric villages, Cedars State Park Museum for its Ancestral Puebloan pottery, Huck's Museum & Trading Post for its impressive Native American artefacts, and the Dinosaur Museum for its footprint, true-to-life sculptures, reconstructed skins, and 250-million-year-old petrified tree. You’ll also be just an hour’s drive from Goosenecks State Park, where the views of the San Juan River making a series of deeply-cut bends in multiple loops below (officially known as entrenched meanders) are eye-poppingly stunning. The park also has a viewing platform, picnic areas, and a campsite that’s ridiculously basic (there’s no water or firewood, so bring plenty of supplies). 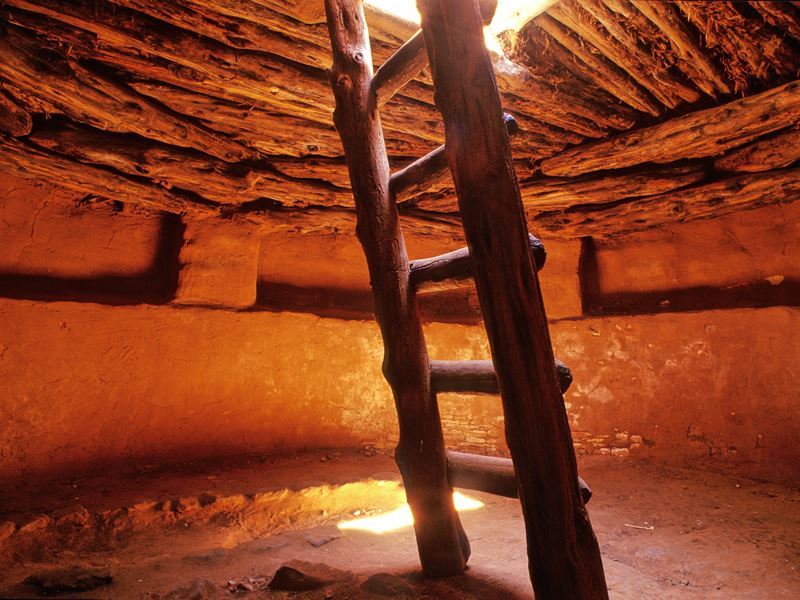 It’s all about the great outdoors in the Utah town of Monticello (pronounced “cello" like the musical instrument) named for Thomas Jefferson's plantation home 2,000 miles away in Charlottesville. A convenient base for the crowd-pleasing Four Corners Area (the quadripoint where the states of Arizona, Colorado, New Mexico, and Utah meet), this little place packs a punch for sporty types with 4X4 off-roading, ATV riding, biking, camping, rock-climbing, cross-country skiing, snowboarding, and swimming. There’s also some great festivals (most famously the Monticello-to-Canyonlands Triathlon in March and the San Juan County Fair & Rodeo in August) as well as an interesting frontier museum filled with all sorts of historical artefacts. Highlights include the oddly-shaped Church Rock that once stored salt licks and feed for cattle in the 1940’s, the 2,000-year-old petroglyph panel Newspaper Rock that can be found on the way to Canyonlands National Park, and the town’s public swimming pool that features a climbing wall, water basketball hoop, and eight-foot waterslide. For golfers, the obvious draw is the Hideout Golf Club for its challenging 18-hole course designed by Forrest Richardson in 2001. 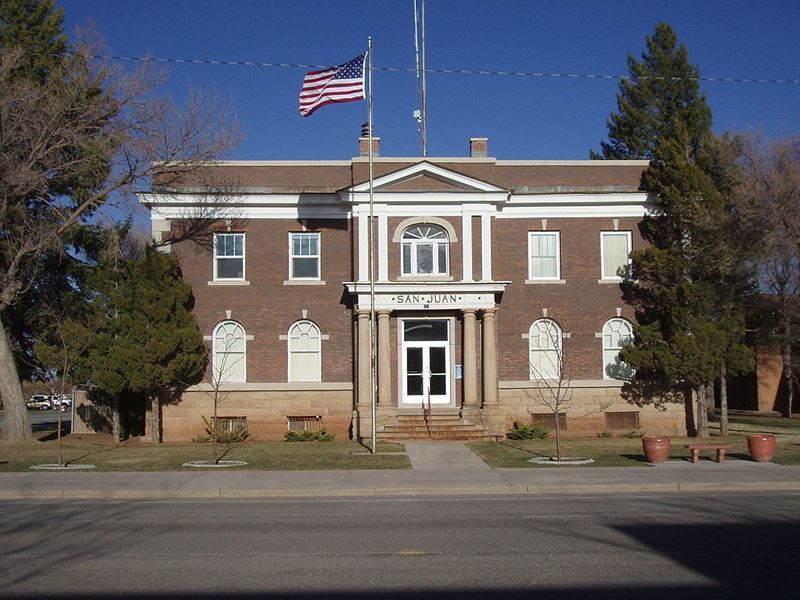 For a combo of adventure and arts, the little college town of Cedar City makes an ideal road trip stopover. And as locations go, it doesn’t get easier for motorists; just over an hour’s drive from both the Dixie National Forest and the Kolob Canyons section of Zion National Park. There’s an attractive downtown area with quaint shops, art galleries, antiques stores and coffee houses, a lovely paved walking trail that weaves its way into Cedar Canyon, and a designed-by-kids playground where little ones can keep themselves amused by digging for dinosaur bones and flying kites. But it’s the annual cultural attractions that make this place so standout; mostly the Neil Simon Festival (mid-July to mid-August) that features three of his 38 plays, and the Tony Award®-winning Utah Shakespeare Festival (June to October) that hosts three well-known performances - all of which are preceded by a free-to-enter Green Show with puppet shows, musicians, and singers. Equally worthy of your attention is the burgeoning foodie scene led by up-and-coming restaurateurs offering ambitious Tex-Mex and American-inspired eats, delicious wood-fired pizzas, and grilled-to-perfection meat and seafood dishes. 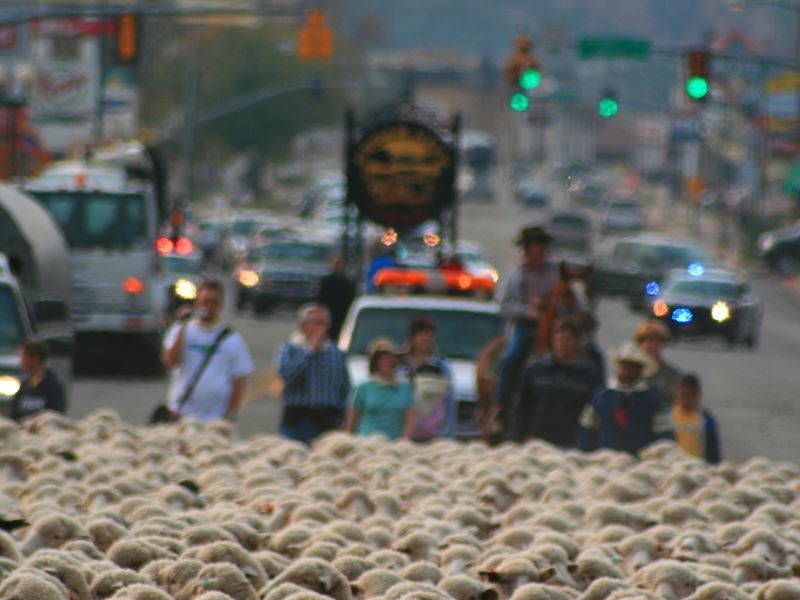 Within minutes of the natural arches at Arches National Park, the otherworldly landscapes at Canyonlands National Park, and the beautiful pine forests of the La Sal Mountains, Moab is the frontier playground that shot to fame in the 1950s when Texan-born geologist Charlie Steen discovered uranium nearby. Nowadays, this red-rock town in Utah’s Colorado Plateau is overrun by enthusiastic outdoorsy types who pile here in their thousands to seek out colossal adventure sports such as rock climbing, stand-up paddle boarding, hiking, white-water rafting, four-wheeling, and mountain-biking (the 10-mile Slickrock Trail on a heavily eroded sandstone plateau is legendary with in-the-know bikers). There’s also the 6.5-mile Hell’s Revenge 4X4 Trail for steep climbs and heart-pounding descents, and the 100-mile White Rim Trail in Canyonlands National Park for looping around and below the Island in the Sky mesa top. For the less brave, most rewarding is Dead Horse Point State Park for its sweeping views of the Colorado River’s gooseneck (the final scene of the 1991 movie Thelma & Louise was filmed here,) and the Sand Flats Recreation Area for its year-round campsites and awesome scenery. 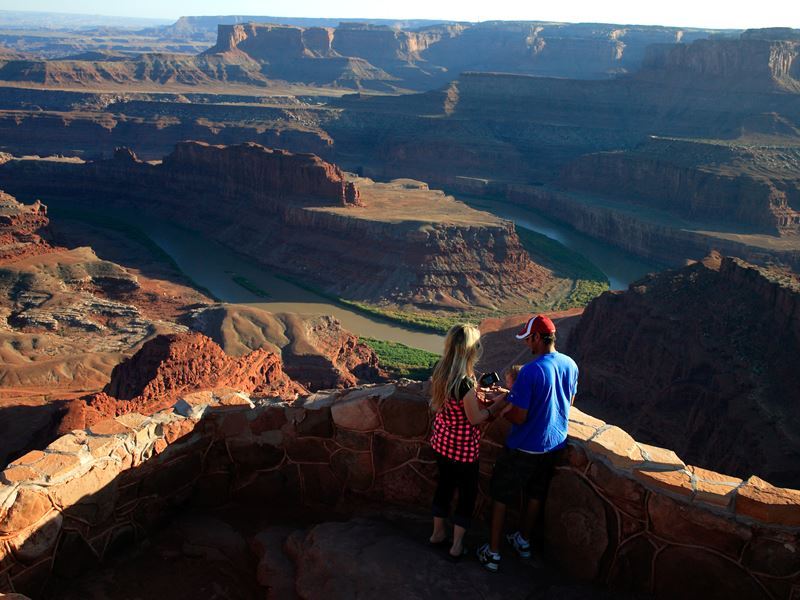 Having spent years as the gateway to Snowbasin and Powder Mountain ski resorts, Utah’s oldest town has transformed into a hip little place that’s rugged and rustic, yet surprisingly cool and urban. Just 35 miles north of Salt Lake City, Ogden really does have something for everyone: skiing, adventure sports, boutique shopping, upscale dining, and a game changing nightlife and cocktail bar scene for those who like to get their groove on after hours. Must-see sights include the revamped Historic 25th Street for its trendy restaurants, eclectic stores, art galleries and summer farmers' market, Hill Aerospace Museum for its military aircraft and missiles, and George S Eccles Dinosaur Park for its full-sized dino sculptures that are cleverly brought to life by robotics and a state-of-the-art sound system. Elsewhere, there’s birds of prey, snakes, tortoises, salamanders and other native animals at the 152-acre Ogden Nature Centre, award-wining plays at the 800-seater Peery’s Egyptian Theatre, reading-oriented kids’ activities at the Treehouse Museum, and tons of wide-open spaces, mountains, rivers, wetlands, gurgling mountain streams, fairways and trails in the Upper Ogden Valley, just a 20-minute drive away. 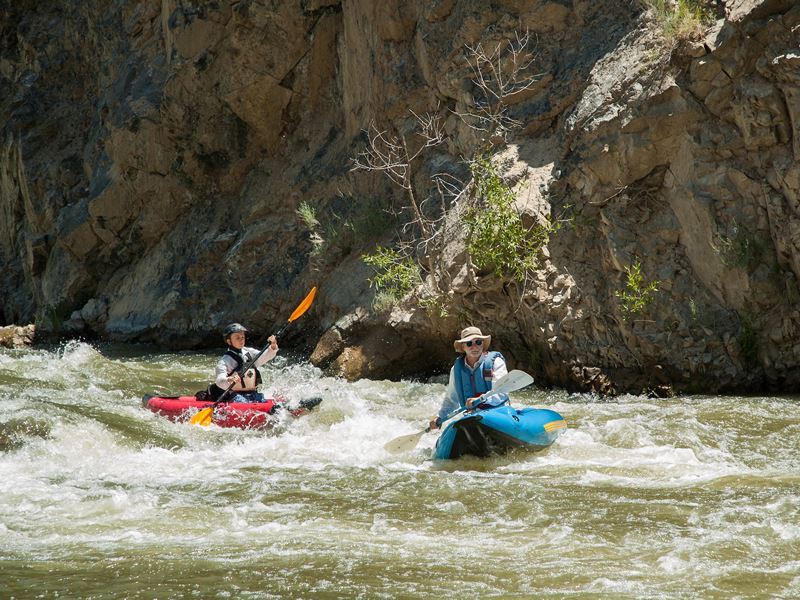 It’s easy to be wowed by Park City, the former silver mining town that reinvented itself as America’s biggest linked ski area (426 downhill trails spread across 9,326 acres) following a whopping $50-million redevelopment plan in 2015/16. But there’s more to this place than blue runs and easy blacks. Must-dos include hitting the three block-long Historic Main Street for its lovingly-restored Victorian mining cabins, galleries, shops, restaurants and bars, downing award-winning craft whiskeys and vodkas at the unique ski-in High West Distillery and Saloon, and shopping for one-off treasures at the open-air Park Silly Sunday Market (open between June and September). Further showstopping sights include Park City Museum for its permanent exhibits (Mega Mine and the Days of Ore, The Dungeon: Park City’s Territorial Jail, The Great Fire of 1898, Muckers & Millionaires) and the supersized Utah Olympic Park for its Nordic ski-jumping hills, bobsled run and Alf Engen Ski Museum. And of course, if you happen to be visiting in January, there’s the Sundance Film Festival - a star-studded, 10-day event that showcases over 100 feature-length films created by independent filmmakers from across the globe. 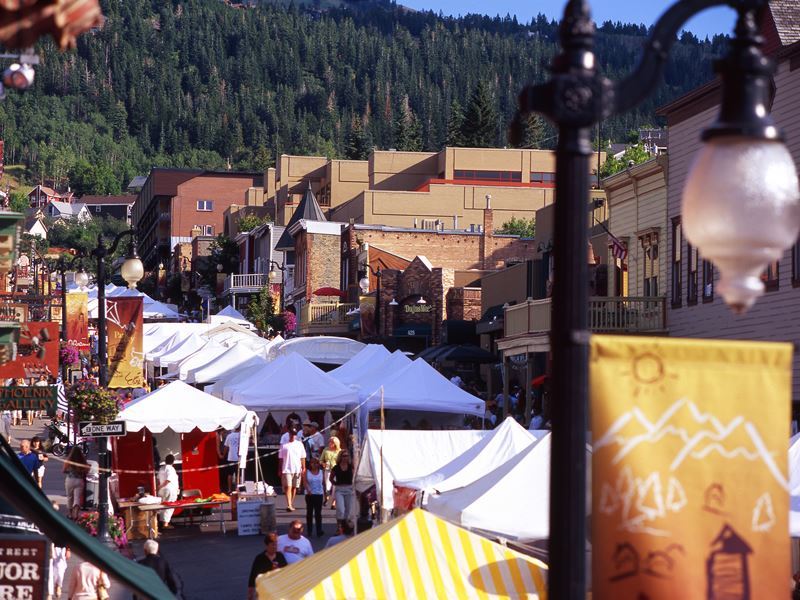 Founded by Mormon pioneers in the 1870s, this small Utah town sitting on the southern border halfway between St. George and Lake Powell can’t be beat for the adventure-oriented. Set in the heart of the Grand Circle, you’ll be an easy drive from the Bryce Canyon and Zion National Parks, Grand Staircase Escalante National Monument, and the Grand Canyon’s North Rim - and only six miles from the rippling arcs of rust-coloured sand at Coral Pink Sand Dunes State Park. Given that Hollywood fell in love with the landscape here and used it in over 100 movies and TV shows, it’s bursting with Wild West heritage; most obvious at the Frontier Movie Town & Museum on West Center Street that’s a free-to-enter attraction with old movie sets and fake storefronts. Further Kanab thrills include visiting the melt-your-heart Best Friends Animal Sanctuary to meet strays, and heading to Moqui Cave to admire eccentric art, geological rarities, and pre-Columbian artefacts from Mexico. For ultimate bragging rights, hike the elusive Wave on the slopes of the Coyote Buttes on the Arizona/Utah border. A permit is essential, available either by entering online up to four months in advance or in person at Kaneb’s Visitors Centre.

As one of America’s fastest-growing towns, St. George is the commercial centre of Utah's “Dixie” - a nickname given to the area when Mormon pioneers grew cotton here. Located in the southwest corner of Utah, just 90 minutes from Las Vegas and only two-and-a-half hours from the Grand Canyon, it’s a land favoured by hikers, bikers, rock climbers and horseback riders lured by Zion National Park, and golfers who are keen to tee off on emerald-green fairways overlooking red-rock desert country. For a cultural fix, head to the free-to-enter Brigham Young Winter Home and the Jacob Hamblin Home, walk around the grounds of St. George Temple, and buy discounted tickets for a midweek show at Tuacahn Amphitheatre - the 1920-seater outdoor arts venue set against the backdrop of Snow Canyon State Park. Further highlights include the St. George Dinosaur Discovery Site at Johnson Farm for its interesting Jurassic-era tracks, the St. George Children’s Museum for its hands-on exhibits, desert room, play farm, science room, and arts and crafts room, and the 52-acre Pioneer Park for its picnic areas, walking trails, and iconic Dixie Rock - a huge red rock with the word “DIXIE” written on it. 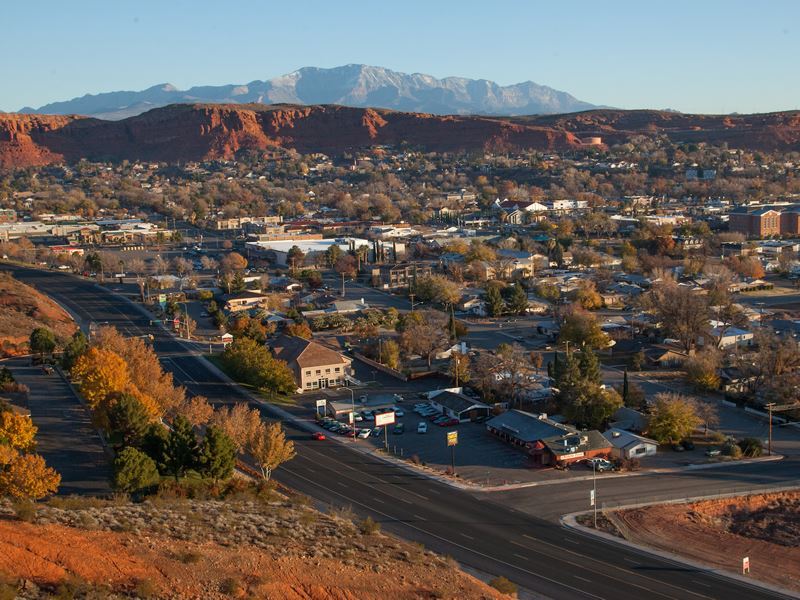 Self-Drive Canyons and Icons of Utah