If you stand still and close your eyes, tilt your ear to the warm breeze and shallow your breathing, you can almost hear the forgotten voices of Death Valley calling. Around 150 years ago, the region enjoyed a bustling, mining boom but now there is only the sound of the ancient dunes ‘singing’ in the wind as it whips sand off the sharp crests and sends it spiralling into the air. 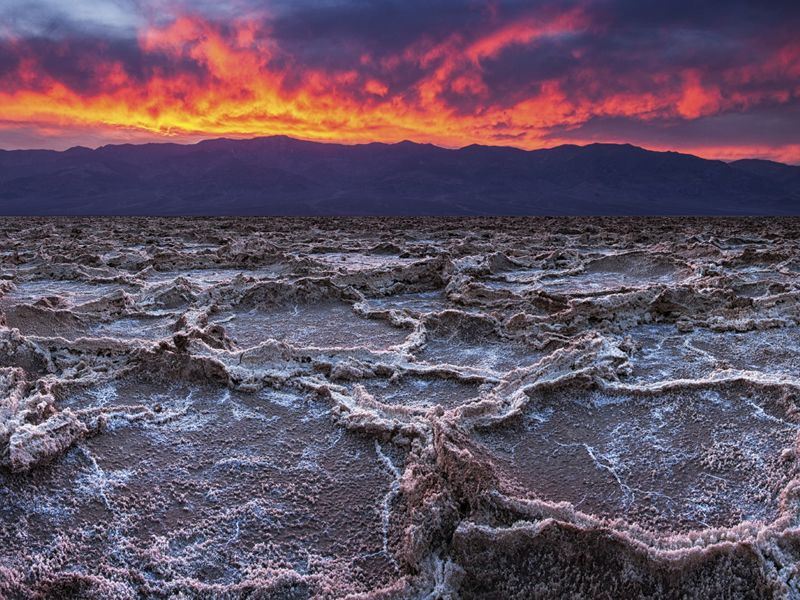 Despite the inhospitable climate, Death Valley National Park was once a bustling hub of gold and silver mining. Abandoned mines still exist and are stark reminders of the changing attitudes to the landscape from a resource to be exploited to a natural wonder to be protected.

In the early 1900's, boom towns sprang up across the desert, propelled by the search for copper, lead, zinc, tungsten and borax and antimony. The iconic twenty-mule wagon train advertising campaign of the Boraxo soap originated in Death Valley. Nowadays all mining has been stopped and the area is a protected national park.

As one of the hottest, driest places on Earth, Death Valley has earned its reputation as one of the most inhospitable regions in the world. With an average rainfall of less than 1cm a month and temperatures that average 46°C in summer, and have topped as high as 57°C, it is a destination to be respected.

Despite its name however, the 5,000sq miles of the Death Valley National Park supports a surprising diversity of life, with more than 1,000 species of plants, 50 of which grow nowhere else in the world and none more so surprising than the endangered Death Valley pupfish, a species perfectly adapted to the shallow, warm, salt waters of the Devil’s Hole sink hole in Salt Creek.

By far, the most mysterious activity in the park is that of the sailing stones of Death Valley, an intriguing natural phenomenon whereby large boulders slowly ‘walk’ across the desert floor, turn over and change direction.

With dramatically-named areas such as Badwater Basin, Funeral Mountains, Furnace Creek and The Devil’s Golf Course, Death Valley may not always have attracted many tourists, but nowadays the US’ largest continental national park attracts tourists all year round. The sinuous slot canyons, palm-shaded oases, volcanic craters and sand dunes all create an eerie and other-worldly desert landscape that is popular for camping and long-distance running events. Each year it plays host to a 135-mile ultra-marathon.

It is well worth getting up early to stand atop Dante’s View, the highest point in Death Valley at 5,475ft, to watch the sun climb over the horizon and bathe the desert floor in golden light, picking out the multi-coloured rock layers and the occasional glisten from a far off piece of shining edge.

Death Valley is best visited in winter when temperatures are more manageable, the desert light is somehow more golden and the mountains juxtapose the sand with a dusting of snow on their highest points.

It is popular as part of a stop-off on the way to Las Vegas but traversing the park requires a lot of driving and travellers are often advised by local guides to ensure they have plenty of water and a spare can of fuel of the journey.

Other attractions include; Zabriski Point allows for stunning views of Furnace Creek, Scotty’s Castle is a popular landmark, Ubehebe Crater is an impressive volcanic site and Harmony Borax Works a popular historical site to visit.