A true taste of Louisiana

An intoxicating fusion of influences from every corner of the globe, Louisiana’s cuisine varies hugely in terms of ingredients and cooking methods. As immigrants from all over the world travelled to begin new lives in the state, they brought with them the staples and kitchen techniques they’d been raised with. The result is a deliciously exciting cuisine, which blends French, Spanish, German, Italian, West African, Haitian, Amerindian and Southern US flavours.

If you want to taste the world without spending years travelling around the Earth, here’s everything you need to know about Louisiana’s cuisine, from its fascinating history, to drool-worthy food festivals and the most emblematic dishes. 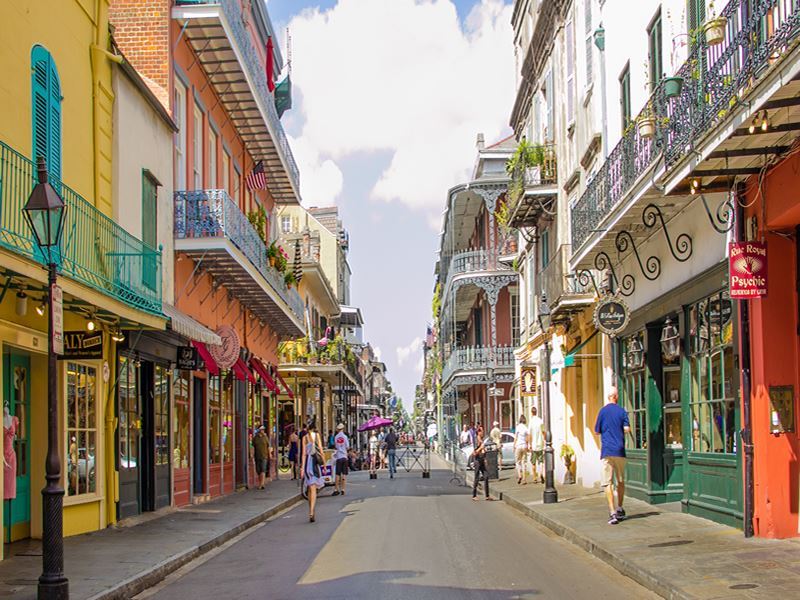 There are two primary types of cuisine in Louisiana: Creole and Cajun. Telling them apart is equally difficult for visitors and locals because in restaurants you’re often presented with two variations of the same dish, i.e. Creole jambalaya and Cajun jambalaya.

Louisiana Creole cuisine is a blend of European, African and Caribbean cooking techniques, used alongside Louisiana ingredients which became popular in New Orleans in the early 1800s. This type of food was founded by the French, with a strong emphasis on slow-cooked dishes left to simmer for hours and complex sauces with layers upon layers of flavour. Louisiana Cajun cuisine was founded in the 1700s by French-Acadian exiles who settled in the prairies and swamps of Southwest Louisiana after leaving their homes in Canada. This type of cuisine isn’t as exotic as Creole and uses fewer imported ingredients.

You can think of Creole as city food and Cajun as country food. Creole kitchens provided people with access to refrigeration, allowing them to preserve things such as butter and seafood. Cajun people didn’t have access to this type of technology, so they developed creative preservation methods using smoke and salt.

The easiest way to tell these two similar cuisines apart is that the use of tomatoes is very common in Creole cooking and extremely rare in Cajun cooking. There’s a lot more to it, but that’s a great benchmark to start off with.The history of Creole food in Louisiana

Creole food began its life in the kitchens of colonial New Orleans, which was one of the most thriving port cities on earth at the time. Because of this, Creole people had easy access to ingredients shipped over from Europe, Africa and the Caribbean, on top of the produce cultivated locally by Native American tribes. Whiskey, vanilla, limes and okra were some of the most prominent ingredients delivered into New Orleans from across the world which gradually made their way into Creole cooking. 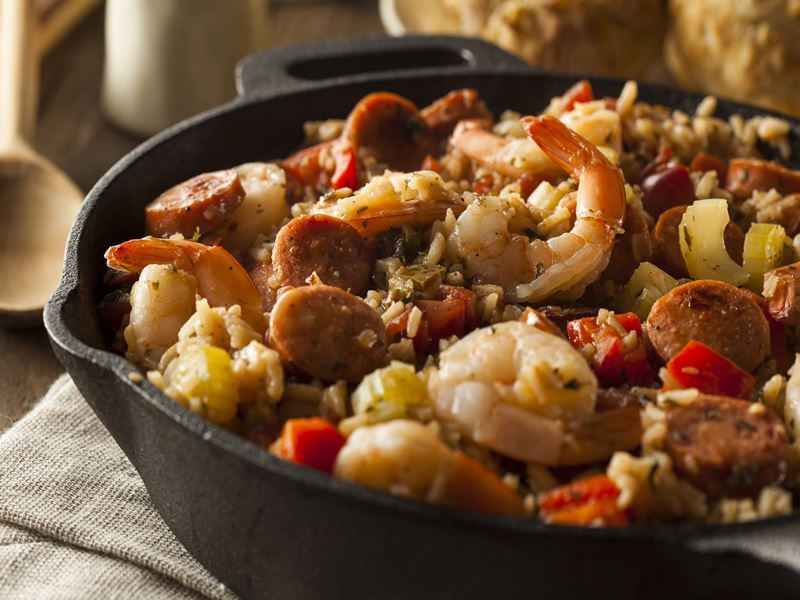 The history of Cajun food in Louisiana

The history of Cajun food in the state isn’t quite as straightforward. This type of food comes from the original French colonists who first settled in the Acadia region of Canada (a strip of land that runs through Quebec, Nova Scotia and Maine). After the British took over the land, many Acadians headed far south, all the way down to Louisiana. Despite their new environment, these people clung strongly onto their French heritage. And while they lacked the spices and produce that the Creole people delivered from the ships in New Orleans, they took expert advantage of Louisiana’s bountiful agriculture and wild game to create Cajun cuisine.

Best known for its buzzing music scene, thriving culture world and deliciously tempting gastronomy, Louisiana does an amazing job of combining all three into incredible festivals. Whether you want to step back in time and find out how the state’s cuisine was founded in the olden days or you want to be adventurous and try dishes you’d never expect to see on a restaurant menu, here are the best Louisiana food festivals you should visit. 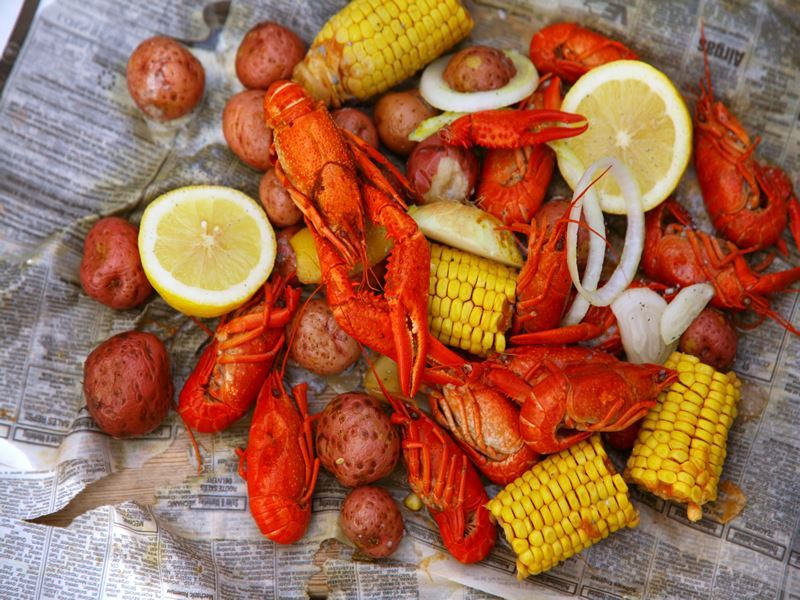 The largest carnival and livestock show in the area that attracts more than 400,000 people each year, the State Fair of Louisiana is an amazing place to sample Louisiana classics, as well as a few more out-there dishes you wouldn’t normally come across. In addition to the stalls selling generous-servings of gumbo and jambalaya, the fair also organises guided food tours, giving adventurous foodies the chance to try unusual fair dishes, including deep-fried Oreos, alligator on a stick and cricket pizza. Accompanying the weird and wonderful cuisine is a wealth of free attractions, including circuses, animal shows and a wide mix of music performances.

Celebrating the international heritage of Louisiana, the Festival International de Louisiane largely focuses on the music and arts scenes, but there’s a world of good eats to dig into, too. Blending influences from Spain, France and Africa, the festival’s gastronomy is unique and exciting, made even more so by the talented chefs striving to create ever-more dynamic dishes that truly represent the international spirit of the festival. Aside from the epicurean delights, other highlights include a 5k fun run, arts and crafts market, plenty of children’s activities and live music. 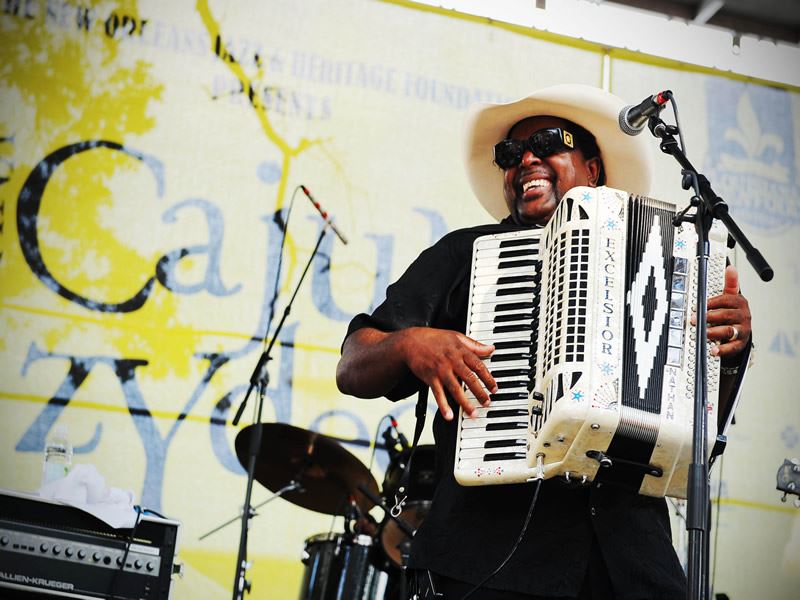 Louisiana’s oldest agricultural festival, the International Rice Festival is a major celebration of the essential ingredient its named after. Featuring livestock shows, rice threshing demonstrations, cooking competitions, classic car shows and parades showcasing antique farming equipment, this event whisks you back to a simpler, more blissful time. If you’re up for a challenge and you skipped breakfast, give the rice eating contest a try! Or if you’re not quite that hungry, pass on the challenge and take advantage of the many food vendors dishing up bowls of rice-based Louisiana classics instead.

One of the newest food festivals to launch in the state, the Louisiana Street Food Festival sees 30+ chefs get together for one day only to dish up creative and mouth-watering street food specialities. The day begins with a 5k run, quarter marathon and kids marathon (perfect ways to work up an appetite!) before the fun really kicks in with all-day eats, drinks and live music. From delicious maple-bacon cupcakes and loaded burgers served in between sliced donuts to health-boosting kombucha and traditional Cajun dishes, there’s something for all palates here. 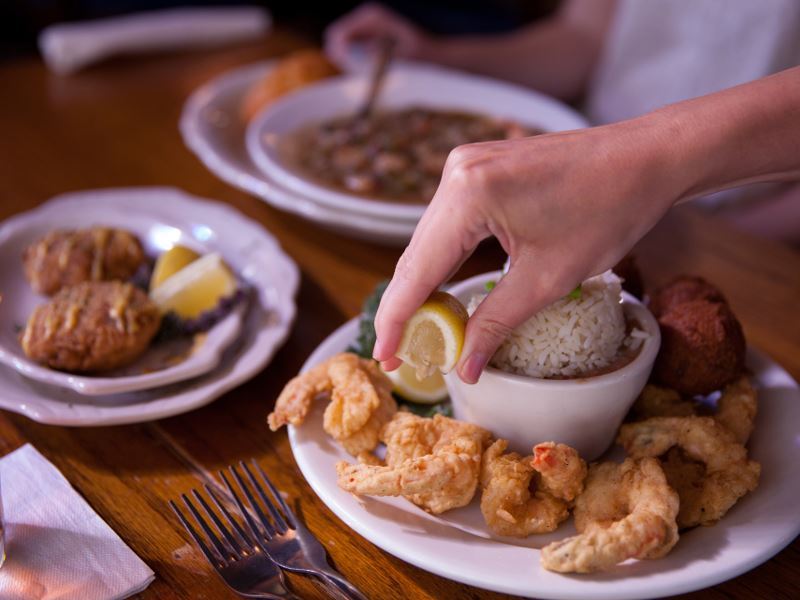 A real melting pot of influences from all over the world, indulging in traditional Louisiana dishes is like taking your taste buds on a world tour. From hearty main courses bursting with spice and flavour to sugary sweets you won’t be able to get enough of, here are the traditional dishes in Louisiana you’ve got to try.

One of the most iconic plates to come out of Louisiana, Jambalaya is a comforting rice-based dish similar to a Spanish paella. In addition to the rice, the recipe also includes meat (often a combo of smoked sausage and chicken or seafood) and onion, celery and green pepper, known as the ‘holy trinity’ in Cajun cooking. There are two main types of jambalaya — Creole jambalaya (sometimes called red jambalaya) which is made with tomatoes and Cajun jambalaya, which is made without. The variety most prominent throughout Louisiana is Creole.

A type of delicious smoked sausage that’s popular throughout Louisiana, as well as in France, Germany, Austria and Belgium, Boudin is made up of rice and ground pork in a pork casing. There’s a huge number of variations of this southern staple, just like there are ordinary sausages. From boudin balls, where the rice and ground pork mix is rolled into a ball, battered and deep fried, to boudin noir which includes pig’s blood and is similar to the British black pudding. It’s most commonly eaten as a snack, so don’t be surprised if you see locals in the street devouring straight links of the stuff. But it’s also often cut into small chunks, covered in breadcrumbs and deep-fried.

A classic dish which appears on many Louisiana menus, grillades is made up of delicate medallions of pork or beef which are pan-fried with spices and vegetables. Liquid is added to the pan to create a rich, flavourful gravy in which the meat and veggies are gently simmered until they’re melt-in-your-mouth perfect. Once served on a bed of the Creole staple rice, grillades are most commonly spooned on top of a mound of creamy grits today. Despite its hearty-sounding nature and appearance, grillades is actually a breakfast dish, served everywhere from family tables at home and weekend brunches to wedding buffets and gala events.

Sure to satisfy any sweet tooth, a Louisiana praline is a sweet made of pecans, white sugar, brown sugar, cream and butter. The sugars, cream and butter are melted together until they become a rich, creamy caramel then the pecans are stirred into the sugary mix. The result is spooned into bite-sized dollops left to cool where they form toffee-like sweets. Many people believe that pralines were first brought over to Louisiana by French diplomat Cesar du Plessis Praslin, who used similar almond-based treats as digestive aids and to give as gifts to the ladies he visited.

One of Louisiana’s best kept secrets, ya-ka-mein is a beef noodle soup that’s played a fundamental role in New Orleans’ African-American community for generations. Nicknamed ‘Old Sober’ for its restorative qualities, ya-ka-mein is a simple broth laden with noodles, sliced beef, spring onions and a hard-boiled egg. The original soup is always made with beef, but some variations replace it with pork or shrimp. It’s rare to find this dish in restaurants — instead, hunt it down from street food stalls, food festival kiosks and small corner shops in African-American communities.

A fantastic cocktail created in New Orleans, Sazerac is a glass of mingling rye whiskey, absinthe, sugar and bitters, decorated with lemon peel. It’s named after Sazerac de Forge et Fils, which is the brand of cognac brandy that was originally its main ingredient. What makes this drink so special is the way it’s made. Two icy-cold glasses are the main pieces of equipment you need. The first glass is swirled with absinthe, while the second glass is used to combine the remaining ingredients which are muddled with ice then strained into the first glass.

A simple dish where the hob does most of the work for you, this jambalaya is a super-satisfying one-pan meal. For that extra special touch, make the Creole seasoning yourself using the recipe below and adjust the herbs and spices to your liking. 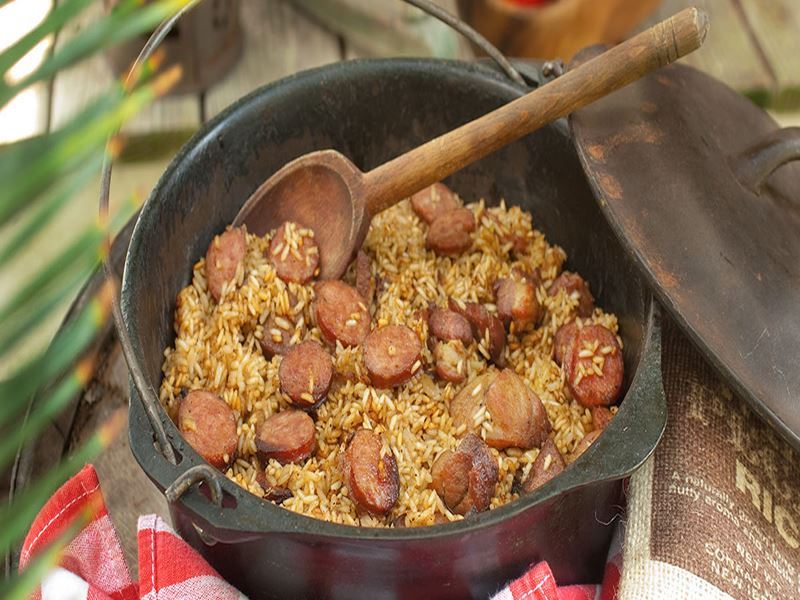 1. Drizzle the oil into a large frying pan over a medium heat. Add the onion, pepper and celery and cook for 10 minutes, until the vegetables begin to soften
2. Stir in the minced garlic and leave to cook for 2 minutes, until fragrant
3. Add the sausage and chicken into the pan, give everything a good stir and leave to cook for 10 minutes, stirring every few minutes so the meat is evenly cooked
4. Mix in the tomatoes, passata, bay leaves, stock, Creole seasoning and rice. Place a lid on top of the pan, reduce the heat down to low and leave to simmer for 40 minutes, stirring regularly during the cooking process