Given that nothing beats the adventure of a car or motorcycle journey, it’s obvious why no other mode of travel has inspired Hollywood’s filmmakers quite like the road trip. Here’s our round-up of the 10 most praised and prized US road trip movies, all of which share an appreciation for self-discovery on America’s wide open roads. 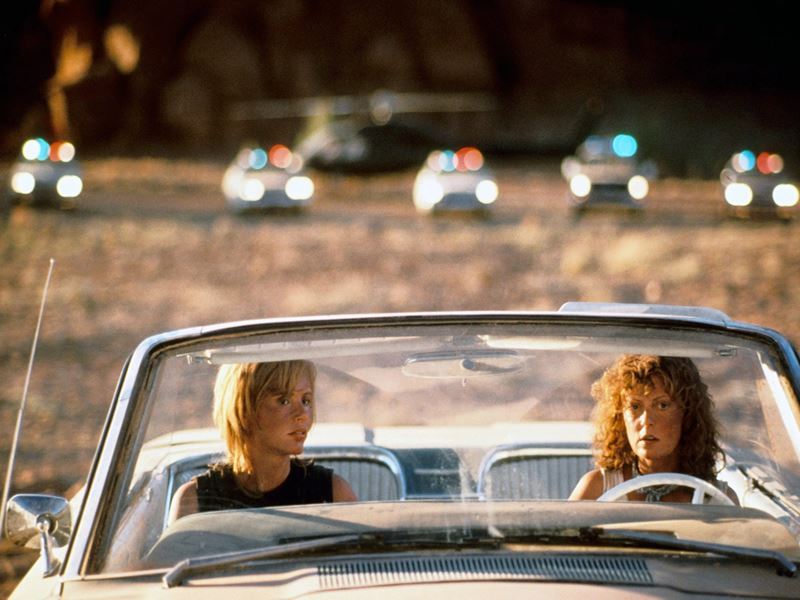 The plot: Alexander Payne’s Oscar-winning dark comedy about two middle-aged men embarking on a road trip around Californian vineyards not only made an impact on the sales of Pinot noir, but on American wine generally. The story centres on a pair of mismatched friends - aspiring writer and wine geek Miles (Paul Giamatti) and the soon-to-be-married Jack (Thomas Haden Church) - who hit the road en route to a mid-life crisis. As the misbehaving duo drink their way around Santa Barbara Wine Country, the non-stop embarrassing encounters (mostly involving wine and women) keep this touching film on the right side of funny.

The journey: Sideways did wonders for the once-fledgling winemaking industry in Santa Ynez Valley (the number of wineries tripled and the number of wine-curious travellers dramatically increased). Filmed almost entirely on location throughout Solvang and the Santa Ynez Valley, key spots included Sanford Winery on Santa Rosa Road (where Miles taught Jack how to taste and appreciate wine) and Foxen Winery on Foxen Canyon Road (where Jack swiped a bottle and poured himself and Miles some more wine). Equally standout is Hitching Post II on 406 E Highway 246 - the upscale American steakhouse where the bottle-tilting heroes dine. 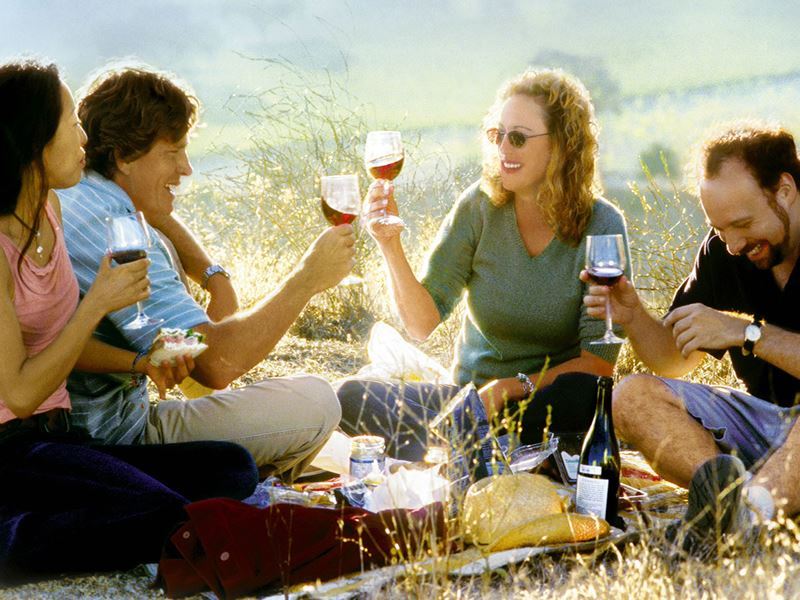 The plot: Following their stint on MTV, Mike Judge’s deliriously dim-witted, heavy-metal loving, and obnoxious teenage delinquents Beavis and Butt-Head landed their own full-length film - the plot of which centres around recovering their stolen TV. Their search results in the no-brain buddies (both voiced by Judge) embarking on a road trip from Las Vegas to Washington DC. Expect a dastardly murder-for-hire storyline, puerile humour, and celebrity cameos that include Bruce Willis and Demi Moore as contract killer Muddy Grimes and his estranged wife Dallas, and Robert Stack as Agent Flemming - the FBI chief with a fascination for full cavity searches.

The journey: After an amusing stop in Las Vegas which features animated versions of real-life hotels and casinos, all roads lead to the White House (most hilariously, former first daughter Chelsea Clinton's bedroom). Other key locations included the Hoover Dam, the Grand Canyon, Yellowstone National Park, and Petrified Forest National Park. And then of course, there’s the Arizona desert scene in which Beavis consumes a peyote cactus and has a vivid psychedelic experience (the animation for this sequence was based on the works of Rob Zombie; listen out for White Zombie’s Ratfinks, Suicide Tanks and Cannibal Girls playing in the background). 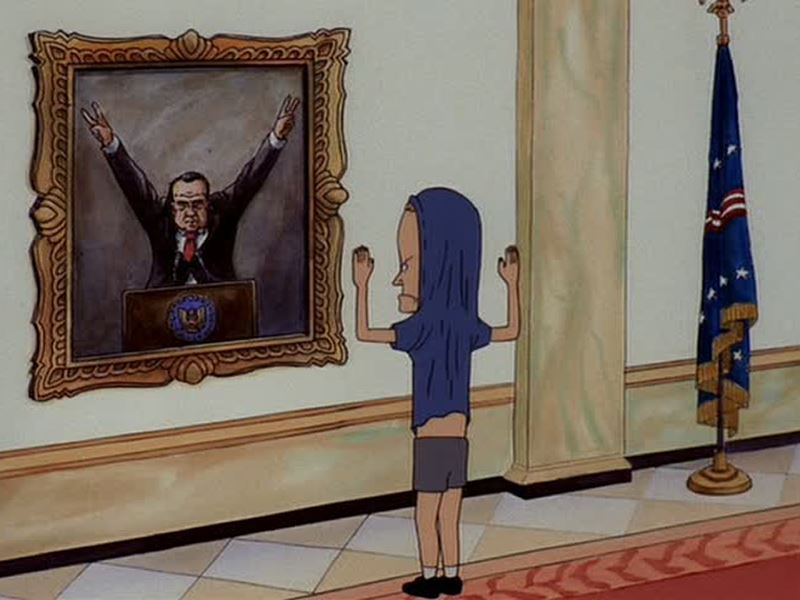 The plot: While controversial at the time of its release, Ridley Scott’s girl-power meets crime-spree-road-trip film scooped six Academy Award nominations and one win for Best Original Screenplay. The movie sees put-upon friends Thelma (Geena Davis) and Louise (Susan Sarandon) heading off in a 1966 Ford Thunderbird convertible for a weekend away from their boring Arkansas lives. But after a stop (and subsequent shooting) at a roadhouse bar, things take a rather dark turn. With blood on their hands, the outlaw pair have no choice but to dodge the cops and flee to Mexico (famously picking up a young Brad Pitt along the way).

The journey: Although the road trip was set on a fictional route from Arkansas to Arizona, the movie was filmed almost entirely in the state of California and Utah (the Grand Canyon scenes were shot just south of Dead Horse Point State Park). The motel where Thelma and Louise met up with handsome hitchhiker J.D. (played by Pitt) is the Vagabond Inn just south of downtown LA, while the bar in which Harlan Puckett attempted to rape Thelma is the Silver Bullet Bar in Long Beach (now the Cowboy Country Saloon). Further filming locations that doubled as the rather flat New Mexico included the La Sal Mountains, Arches National Park, and Canyonlands. 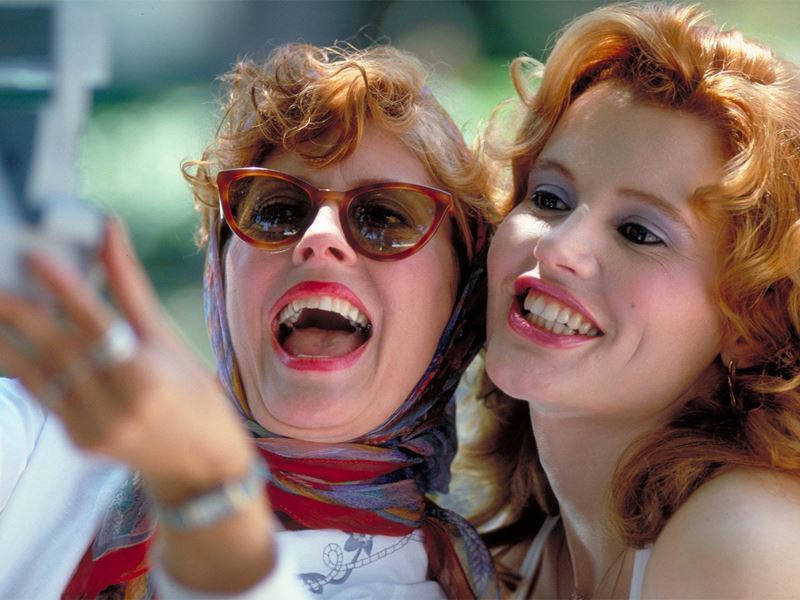 The plot: Taking his outrageous Kazakhstani reporter character Borat to the big screen was not without consequence for Da Ali G Show creator Sacha Baron Cohen - Kazakhstan’s government famously took out fury-filled ads in the New York Times to show their distaste. This intentionally inappropriate mockumentary-cum-comedy sees Cohen's hapless alter ego, Borat Sagdiyev, heading to the USA to make a documentary about all that’s great and good about the nation. With a documentary crew in tow, he not only drives a battered old ice-cream van from New York to California in the hope of marrying Baywatch beauty Pamela Anderson, but he also manages to offend a huge amount of unsuspecting Americans along the way.

The journey: New York got a good chunk of screen, especially Trump International Hotel and Tower, Times Square, Central Park, and the Wellington Hotel on 7th Avenue in midtown Manhattan (when Borat reached his room, he felt like “da king of the castle”). Further filming locations included Gaithersburg in Maryland, Salem in Virginia, and Orange County in California where Borat finally comes face-to-face with Pamela Anderson at a book signing at Virgin Megastore (his attempts to put Pam in a sack and kidnap her are hilarious). 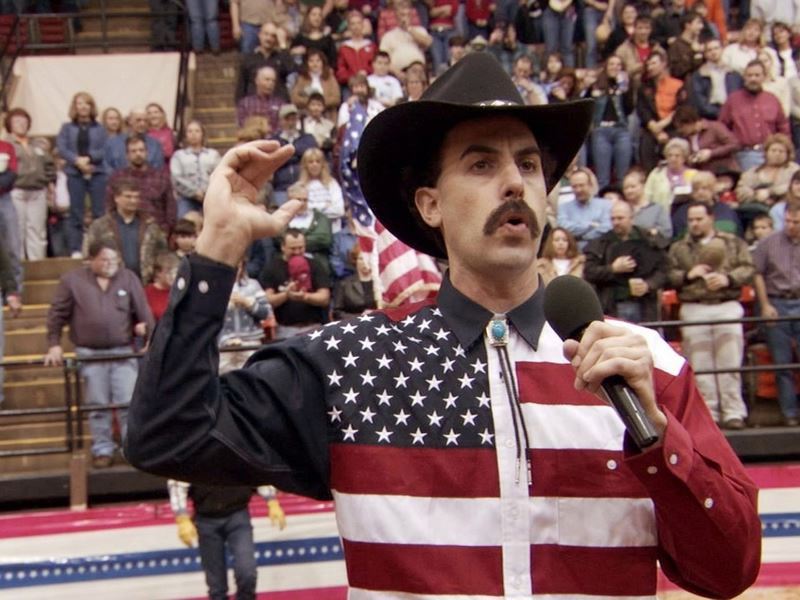 The plot: The first cinematic outing for Jim Henson’s colourful Muppets crew sees Kermit the Frog persuaded by agent Dom DeLuise to leave his beloved swamp and pursue a career in Hollywood. Along the way, this banjo-playing superstar with ping-pong eyes and a felt green body (made from an old coat belonging to Henson’s mother) picks up Fozzie Bear, Miss Piggy, Gonzo, rock musicians Dr. Teeth and the Electric Mayhem, and a heap of other Muppets with starry aspirations. Meanwhile, Kermit must watch out for unscrupulous restaurant magnate Doc Hopper and his sidekick Max, who plan to use him as the face of their Frog Legs food chain.

The journey: Once Kermit leaves his Louisiana swamp (in real-life, a grove of mossy oaks in Rancho San Carlos), it’s the scenes in Los Angeles that are the most memorable. Primary locations included the World Wide Studios (really CBS Studio Center on 4024 Radford Avenue in Studio City), the iconic Hollywood sign, and Hollywood Boulevard. Landmarks such as the Capital Records building and Grauman's Chinese Theatre can also be seen in the background as the Muppets drive around the city in a 1946 Ford Woodie station wagon. 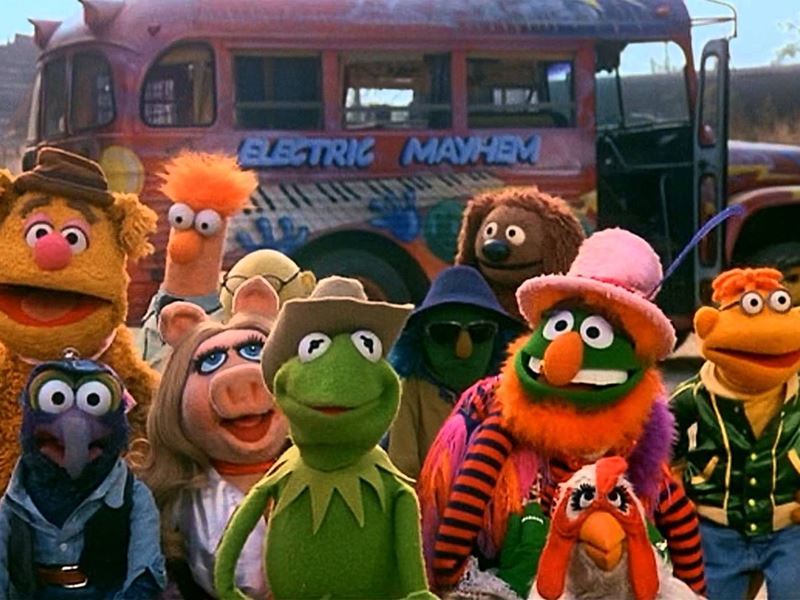 The plot: Set in post-apocalyptic America, this arguably brilliant horror comedy sees shy college student Columbus (played by Jesse Eisenberg) making his way from the University of Texas to his hometown of Columbus, Ohio to be reunited with his (hopefully alive) family. He soon hooks up with insane zombie-killer Tallahassee (Woody Harrelson) who is driving around in his black Cadillac Escalade to seek asylum and track down Twinkies. The unlikely duo then encounter two con-artist sisters Wichita (Emma Stone) and Little Rock (Abigail Breslin) and the foursome have the run of America as they reluctantly take on the battle against the undead.

The journey: Despite appearing to range across the country, the movie was shot almost entirely in Georgia. The theme park scenes for the climax at the fictitious Pacific Playland were mostly filmed at Wild Adventures Water and Theme Park in the small town of Valdosta. Some of the rides prominently featured in the film included Pharaoh's Fury, Double Shot (renamed Blast Off), Rattler, Aviator, and Bug Out. A haunted house facade was also set up at the theme park, but the interiors for this were filmed at Netherworld Haunted House in Atlanta. 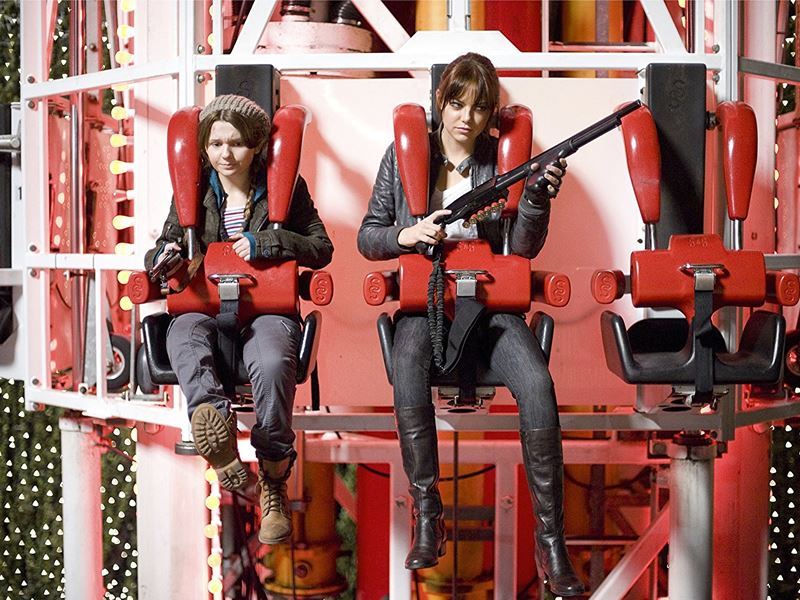 The journey: While it was well-noted that anyone following the Hoover’s emotionally-charged route should be forewarned (the film shows a little enhanced geography), the family’s trip technically started in New Mexico’s Albuquerque and ended up in California’s Redondo Beach. Shot between Arizona and Southern California over a 30-day stint, key locations included the Hyatt Regency Valencia, Vasquez Rocks Natural Area Park, and the Crowne Plaza Ventura Beach (this doubled for Redondo Beach in the beauty pageant scenes). 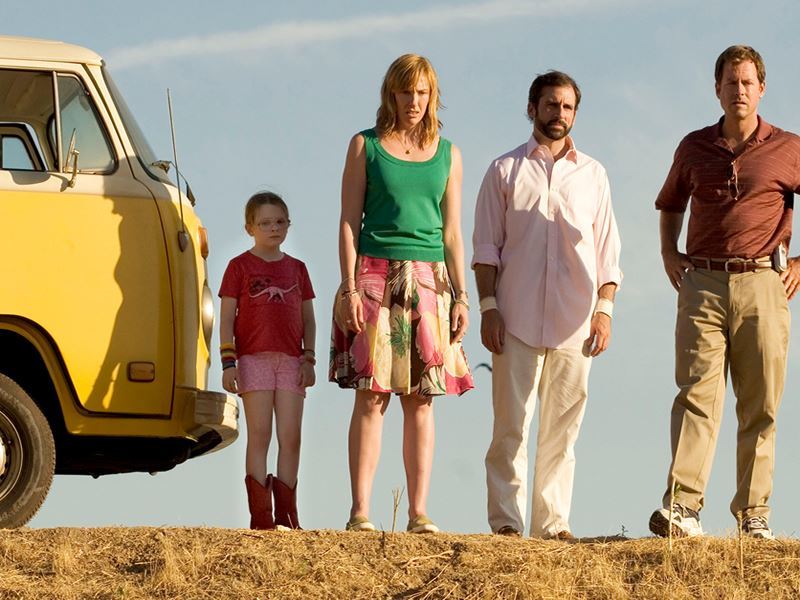 The plot: Counter-culture classics don’t get more monumental than this biker buddy flick in which spirited freewheelers Wyatt (Peter Fonda) and Billy (Dennis Hopper) wrap up a drugs deal and travel from Los Angeles to New Orleans by motorcycle, hoping to make it in time for Mardi Gras. It’s a tale that has it all: Harley-Davidson chopper-style bikes, the free love movement (as well as LSD, communes, and marijuana), and the poignant tagline of “A man went looking for America. And couldn’t find it anywhere”. With a budget of well under $1 million, not only did this epic film (a rite of passage for college-age kids) gross more than $60 million worldwide, but it ignited a revolution in moviemaking that hasn’t been recreated since.

The journey: Since almost the entire film was shot on location, the backdrops (Los Angeles, Death Valley, Colorado, New Orleans) are all accessible to bikers (fans with money to burn can even sign up for a 2589-mile Easy Rider Motorcycle Tour). Iconic spots included La Contenta Bar (now the Red Arrow Emporium in El Prado), the ghost town of Ballarat in Death Valley, and sections of Route 66 between Needles and Flagstaff (the entire opening sequence was filmed here). Also worth a look is Bellemont in Arizona for Pine Breeze Inn - the roadside relic where the duo attempted to spend the night until the owner lit the "No Vacancy" sign. 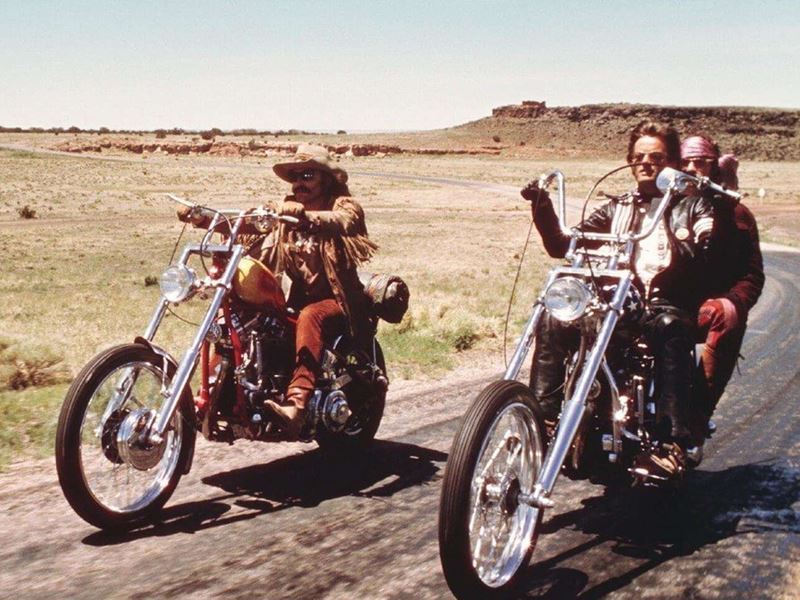 The plot: Brotherhood is more important than cash is the underlying message in Barry Levinson’s Oscar-winning and crowd-pleasing drama. Enraged to find out that his late father has left a multi-million dollar inheritance to his estranged and autistic brother Raymond (Dustin Hoffman), two-bit hustler and all-round selfish guy Charlie Babbit (Tom Cruise) plans to wrangle the money for himself. He kidnaps Raymond, but after driving cross-country for a week, the road trip turns into a journey of self-discovery and understanding for the long-lost brothers (as well as a sympathetic, sentimental, and sob-worthy experience for the audience).

The journey: The brothers' road trip in Charlie’s 1949 Buick Roadmaster convertible starts in Ohio’s Cincinnati and ends up on LA. Key filming spots included the “Wallbrook" institution - the real-life Sisters of Divine Providence's St. Anne Convent (the film's iconic poster shows the duo travelling down its long oak-lined entrance near the intersection of St. Anne Drive and Mary Ingles Highway). Most memorable, though, is the Las Vegas casino scene that was filmed at Caesars Place (to this day, the hotel’s Emperors Suite is still referred to as the Rain Man Suite). 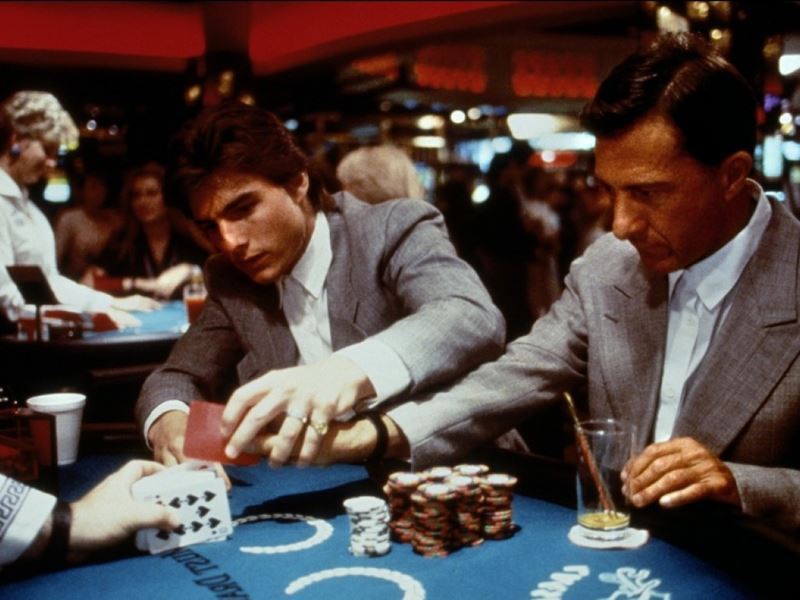 The plot: Written, co-produced, and directed by Sean Penn, this powerful adaptation of Jon Krakauer's non-fiction book of the same name follows the real-life travels of Christopher McCandless (Emile Hirsch) in the 1990's. The tragic story has been well-documented: wealthy 24-year-old graduate turned vagabond hitchhikes to Alaska with little more than a .22-caliber rifle and a 10-pound sack of rice, sets up camp in a 1940's-era International Harvester bus, and lives here for four months before starving to death. His body was discovered by moose hunters just outside the northern boundary of Denali National Park; the exact cause of death was unknown.

The journey: The marathon two-year shoot encompassed 35 different locations throughout the USA, including Georgia, South Dakota, Arizona, Nevada, Mexico, Oregon, Colorado, California, and Alaska. The route also included some legendary hiking trails, most famously the dangerous Stampede Trail near Healy that passes by McCandless’ dilapidated “Magic Bus 142” in Alaska’s Denali National Park (most brave Into the Wild fans make it there and back safely, but many end up needing rescuing by the park authorities and state troopers). 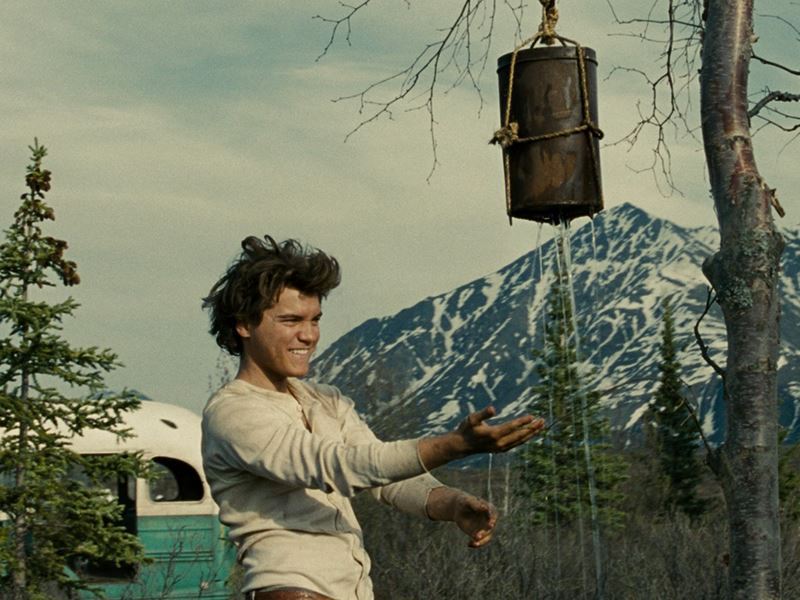