The much-buzzed-about Diagon Alley expansion of The Wizarding World of Harry Potter at Universal Studios has brought even more magic to Orlando, Florida. The new attractions join the original installment of J.K. Rowling’s world, Hogsmeade at Universal’s sister park – Islands of Adventure, and are accessible via a park-to-park train ride on the Hogwarts Express (which of course departs from Platform 9 3/4 at replica of the real-life King’s Cross Station). 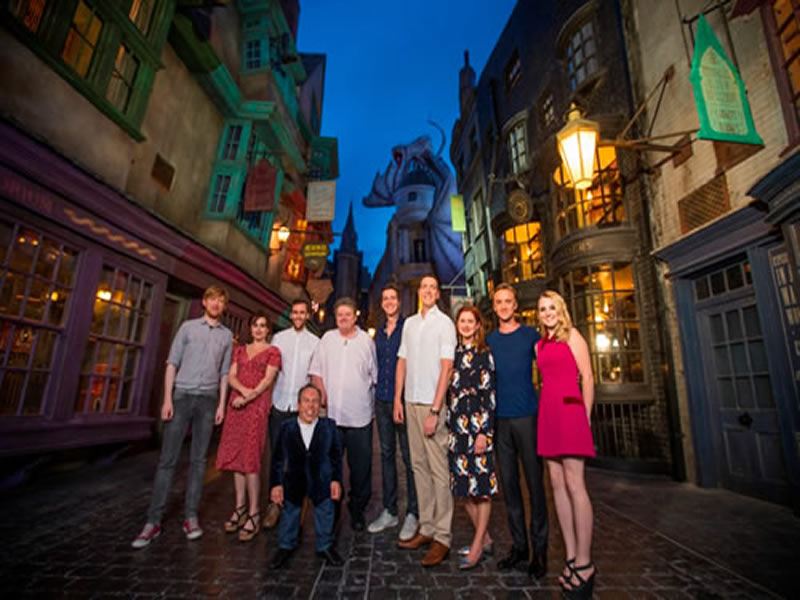 The expansion carries with it some of the most popular aspects of the original, but there is no shortage of new adventures to explore! Here are the sights, sounds, eats, and experiences that you won’t want to miss at Diagon Alley in Universal Studios! (For Hogsmeade recommendations, see our guide: A Muggle’s guide to The Wizarding World of Harry Potter – Islands of Adventure).

The ride that everyone is talking about
Similar to its groundbreaking Hogsmeade counterpart (Harry Potter and the Forbidden Journey), the brand new Harry Potter and the Escape from Gringotts blends 3-D motion simulation with live action set pieces and effects to take riders on a journey through the mysterious and heavily guarded goblin bank. Join Harry, Ron, and Hermione as they face off against classic villains such as Voldemort and Bellatrix Lestrange in addition to the countless stringent security measures in the thief-proof vaults deep within the underground caverns of Gringotts.

The souvenirs
Ollivander’s Wand Shop opens a second (more literarily correct) location in the new Diagon Alley. With the extremely popular performance in which “The wand chooses the wizard” carrying over as well, young witches and wizards won’t be sorry to wait in the queue that frequently forms outside of this gift shop.

Ollivander’s is joined by several other book-inspired shops as well. Weasley’s Wizard Wheezes lives up to the reputation of its twin prankster founders with joke merchandise such as Extendable Ears and love potions.

The Magical Menagerie is the destination for animal lovers looking to take home their favorite pets from the books; including Fang the boar hound, Crookshanks the cat, Scabbers the rat, Fluffy the three-headed cerberus, and Buckbeak the Hippogriff.

No matter what house the Sorting Hat chooses for you, Madame Malkin’s Robes for All Occasions has all of the Slytherin, Gryffindor, Hufflepuff, and Ravenclaw attire that a student could possibly need!

The athlete in your wizard family will definitely require a trip to Quality Quidditch Supplies to stock up on broomsticks, Quaffles, Snitches and other supplies for the internationally famous magical sport. Looking to show some team spirit? Apparel for your favourite team, be it the Hollyhead Harpies, Chudley Cannons, or the Quidditch World Cup finalists Ireland and Bulgaria is available.

Brave souls can venture down the foreboding Knockturn Alley to find Borgin and Burkes, the spooky dark-magic shop that sells Deatheatre Masks, costumes, and other replicas.

The food and drinks
Famished witches and wizards would do well to visit The Leaky Cauldron, a pub that serves cottage pie, fish and chips, bangers and mash, scotch eggs, stew, and other favorites of British fare. Just be sure to wash it down with the signature (and incredibly popular) beverage of The Wizarding World of Harry Potter: Butterbeer, a butterscotch-y cream soda topped with whipped cream and served in liquid or frozen form.

Don’t forget to save room for dessert! Florean Fortescue’s Ice Cream Parlour is the spot for scoops and soft serve. For the early risers, breakfast foods and pastries are also available.

Sights and experiences
As with Hogsmeade, I highly recommend taking the time to simply walk through Diagon Alley to take in all of the sights and sounds, the elaborate details that make the magic of the Harry Potter series so very real to Muggles like you and me!