Discover the fascinating Deep South on this circular flydrive itinerary from Atlanta – from the history of civil rights in Birmingham to the future of space travel in Huntsville, from the birthplace of Elvis to his final resting place at Graceland. Spend time in the “Hit Record Capital of the World” Muscle Shoals, described by Keith Richards as “Rock n Roll Heaven”, and enjoy all the superb live music of Nashville and Memphis.(ATI) 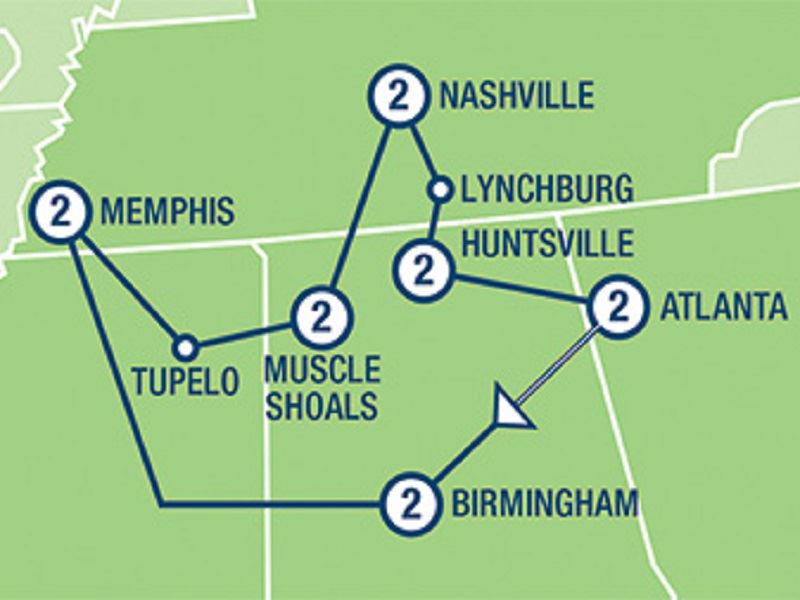 Arrive in Atlanta, pick up your hire car and drive to Birmingham Alabama for a two night stay. Alternatively we can book you into an Atlanta airport hotel for the night if you’d rather be fresh for your drive.

A day to explore Birmingham. Recommended is a visit to the Barber Vintage Motorsport Museum, home to the world's largest motorcycle collection. The museum has over 1,200 vintage and modern motorcycles and race cars. If it’s a Sunday morning, hear a spirit filled Gospel Choir at the historic 16th Street Baptist Church, nominated as a World Heritage Site. The church is located in the Civil Right District of Birmingham, adjacent to the Birmingham Civil Rights Institute and a must-stop for those that want to learn more about Southern history and Dr.Martin Luther King, Jr.

This morning drive into Tennessee and the music city of Memphis. Explore the birthplace of the blues by taking in a performance in one of the entertaining Beale Street blues bars. Discover the Rock & Soul Museum, the Stax Museum of American Soul Music, the Gibson Guitar Factory, and Sun Studio where musicians such as B.B. King, Elvis Presley, and Jerry Lee Lewis recorded their rock'n'roll hits. Enjoy an evening on lively Beale Street to listen to live music and enjoy a beer and a bite to eat.

Today we suggest a visit to Graceland, home of Elvis Presley and now an impressive museum, memorial and indeed place of pilgrimage. Another must-visit is the National Civil Rights Museum, a fascinating and sensitive study of the civil rights movement. It has been built around the Lorraine Motel - the location where Martin Luther King Jr was assassinated – here you can follow his last day and see the carefully preserved rooms. Rather than being morbid, this is a thought-provoking and memorable place to visit.

Travel to Tupelo, Mississippi for a day trip to see the modest birthplace of Elvis. The most significant landmark of Tupelo's modern history is a modest, two-room house where the King of Rock & Roll was born on January 8, 1935. From this humble beginning, Elvis Presley began his swift rise to become the world's most popular entertainer. The house, built by his father with $180, is part of the 15-acre Elvis Presley Park. The home is a Mississippi landmark and the centre-piece of the park which includes among many other exhibits, the popular photo-op "Elvis at 13" statue and Elvis' childhood church. Drive onto Muscle Shoals.

Return to Tennessee this time to the music city of Nashville. Walk along Broadway, dipping in and out of the Honky Tonk bars to listen to fantastic live music.
Two nights: Ramada by Wyndham Nashville/Music Valley (or similar)

Drive to Lynchburg Tennessee where small town values and perfect Americana living are alive and well. It might be small, but it's home to one large industry - the Jack Daniels Distillery - which is the oldest registered distillery in the United States. Every ounce of Jack Daniels Tennessee Whiskey is produced here, fed by the pure, ironfree cave water springs nearby. Continue to Huntsville for a two night stay.

A day in Huntsville to visit the largest space museum in the world, the U.S. Space & Rocket Center. The museum has one of the most extensive collections of space artifacts and displays more than 1,500 rockets, engines, spacecraft, simulators, and hands-on exhibits.

The final leg of your journey, returning to Atlanta in Georgia. Time to buy some last minute souvenirs at the Mall of Georgia, upmarket Lennox Square or bohemian Little Five Points.

Enjoy a day in Atlanta, which started as railroad junction in the 1830s and quickly became the transport hub of the South. Visit the Georgia Aquarium, World of Cocoa Cola or Atlanta History Center.