This tour will bring you through many of the highlights of the Deep South, as well as provide an in-depth look at its unique culture and history that birthed the blues, jazz, country and rock ‘n’ roll. Enjoy the relaxed, laid-back atmosphere of the South, sipping sweet tea or mint juleps in between exploring New Orleans’ Bourbon Street and cruising through the river swamplands, spotting alligators that lie beneath the graceful cypress trees. Wander through magnificent plantations, walk in the steps of Elvis Presley at Graceland and visit iconic Sun Studio, where his first ever recordings were made. 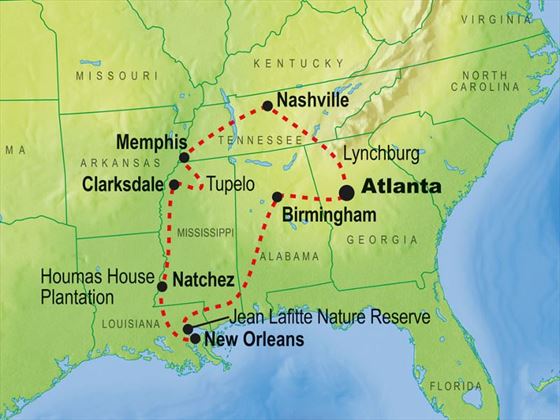 Your exploration of the Deep South begins in the city of Atlanta, which has become known as the “vanguard of the New South” balancing southern charms with modern delights. Be sure to take a self-guided walking tour of downtown before it’s time to leave, and sample some of its delectable southern cuisine at Empire State South.

Venture on to the “Big Easy,” renowned for its ethnic diversity with its eclectic blend of Creole, Cajun and European cultures that can be found in its music, architecture and cuisine. First on the agenda is a stroll down legendary Bourbon Street in the heart of New Orleans, the French Quarter. There are few better places in all of America to experience history than these cobblestone streets, where you you’ll marvel at the French colonial townhouses draped in ivy, the Creole cottages built on stilts and the magnificent antebellum mansions with their balconies laced with detailed ironwork. Be sure to stop for a photo-op at the Spanish Colonial- and Renaissance-style St. Louis Cathedral.

Afterward, take a trip back in time on an elegant Mississippi riverboat dinner cruise, featuring the delectable flavours of the local fare that reflects the multitude of diverse cultures that make up this city. After dark, things really get hopping, so take the opportunity to explore New Orleans’ renowned music scene, influenced by greats like Fats Domino and Louis Armstrong, along with more recent names such as Wynton Marsalis and Harry Connick, Jr. With live music every night of the week your evenings are sure to be full, and incredibly entertaining. The famed Preservation Hall is a must, but get in line early and prepare for a wait, as this hotspot is where some of the top jazz artists perform for small audiences in an intimate venue every night.

With three days in this incredible city, you can expect to enjoy some free time for exploring the surrounding area – be sure to squeeze in a boat tour of the wild river swamplands, where you’ll glide beneath the lovely cypress trees, searching for wildlife like alligators, swamp deer and graceful, long-legged waterfowl.

Journeying toward Mississippi, you’ll make a stop at the Houmas House Plantation and Gardens in Darrow, Louisiana first. This grand 1828 antebellum estate allows visitors to experience the life of a wealth Sugar Baron in the 19th century, and features an alluring live oak alley, along with acres and acres of lush landscape, including ponds and gardens. Following the river road, you’ll reach your destination for the night, Natchez, the birthplace of the Mississippi riverboat. This was the Mississippi River’s very first established settlement, and the original capital of the Mississippi Territory, as well as the centre of the slave trade. Take a self-guided tour through the historic district, with its streets lined with countless antebellum homes and a number of historic churches. The “Under the Hill” area that was made famous by American writer Mark Twain, is a must-visit. You may also want to wander through some of the most unusual and interesting tombstones and graves in the historic Natchez City Cemetery – if you go after dark, you can see the “Turning Angel,” which seems to watch people as they pass by at night.

Today you’ll visit Clarksdale and the Hopson Plantation, the former home of a great music legend, blues pianist Pinetop Perkins, as well as the town where the International Harvester automated cotton picker was first tested. You’ll learn about the history behind it from your guide, including the system of sharecropping and the evolution of the cotton industry, which not only shaped the region, but the lives of many that live here.

Clarksdale is also well-known as the home of the infamous “Crossroads,” the very spot where legend tells that blues musician Robert Johnson sold his soul to the devil. You might also want to visit the Delta Blues Museum to explore this blues shrine of artefacts and memorabilia, and experience some of the town’s nightlife, like actor Morgan Freeman’s Ground Zero Blues Club or Red’s, a juke joint offering live music that will instantly transport you to the true soul of the South. Entrance to the Delta Blues Museum and Ground Zero Blues Club is payable at approximately $10.

Travel to Memphis, your final stop for the next two nights, you’ll be able to explore more of Elvis’ life with a visit to Graceland, the mansion he lived in during his later years, walking through his legendary jungle room, viewing his massive record collection, the pink Cadillac, and much more. You’ll even have the chance to visit iconic Sun Studio, where countless blues, rock 'n' roll, and rockabilly recordings were made, including the first recordings made by Elvis and Johnny Cash. Memphis isn’t all about music, however, as it has a rich history too. One of the top sites to experience is the National Civil Rights Museum, housed in the former Lorraine Hotel where Martin Luther King was assassinated. (Entrance to attractions is at additional charge)

Your exploration of music continues in Nashville, the Country Music Capital and the home of the Country Music Hall of Fame. Get a taste by heading to the famous Wildhorse Saloon, where you can even join in on the line dancing. Nashville isn’t just about country, among the many honky-tonks and intimate live music clubs and bars, are plenty of classic rock n’ roll, indie rock and several hip-hop venues too that you may want to experience.

After a night out on the town, enjoy a relaxing day visiting attractions like the historic Ryman Auditorium or The Hermitage, the former home of U.S. President Andrew Jackson which is filled with his family's personal possessions and even includes the furniture that they personally purchased. A visit to the Grand Ole Opry, the world’s longest running radio show, is a must, just be sure to book ahead as it’s also one of the most popular things to do in town.

It’s time to make your way back to Atlanta, but the fun doesn’t have to end just yet. You’ll have the option to stop in Lynchburg for a tour of Jack Daniels’ Whiskey Distillery and a taste of the state’s most famous drink before this adventure comes to an end.

Due to the time that the tour ends, your return flight must be booked for departure after 9pm. Or why not speak stay an extra night? Speak to one of our sales experts who will be happy to advise you.

Prices correct as at 6pm on 28 Jan 2020. Please call for final price. Prices are per person based on 2 adults sharing a room. Other durations available - call for quote.

Daily Departures . Different hotels of a similar standard may be used on certain departures. Parking fees are not included. Supplements may apply on dates within certain dates during peak travel periods. (GAA)