A beginner's guide to Tennessee

The great outdoors, delicious food and a rich history in distilling some of the most popular whiskey in the world are all excellent reasons for visiting Tennessee, but really it’s the music that is a the big draw. Their strapline is “The Soundtrack of America – Made in Tennessee” and we’re not going to argue with that!

We’ll start with the key places to visit and what you’ll experience when you’re there, and then move onto the tastes you can enjoy in Tennessee. 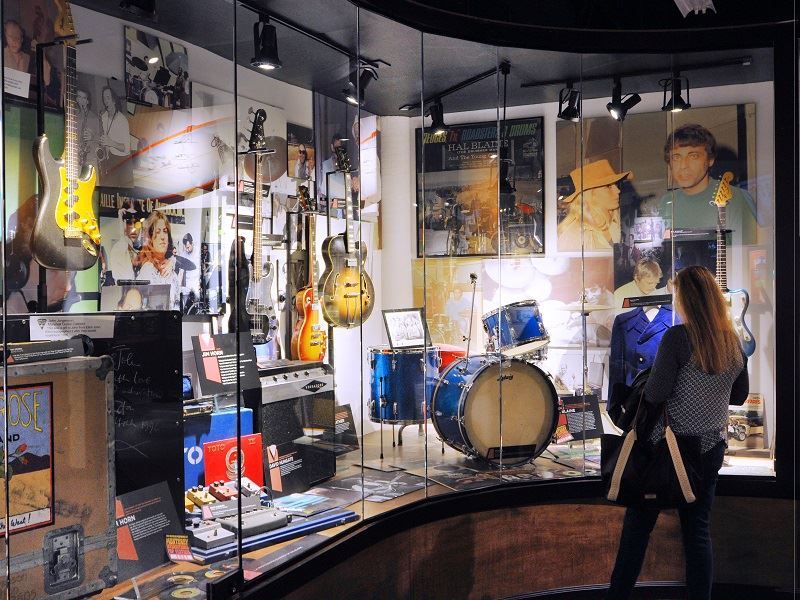 Known as THE music city, you’ll find rock, country and everything in between. The Country Music Hall of Fame and Museum is a great place to start. Here you will find a superb collection of 800 stage costumes, 600 instruments, and hundreds of other objects from microphones to automobiles documenting the history of country music – but don’t be put off by the scale, it’s beautifully arranged in a well-designed building and a lovely place to spend as much or as little time as you’d like. You might then want to pick up a tour of Historic RCA Studio B which departs daily from this museum. In its heyday, Studio B saw the creation of numerous chartbusters, such as Dolly Parton's "I Will Always Love You" and Elvis Presley's "Are You Lonesome Tonight?"

The Grand Ole Opry is Nashville’s most famous attraction and is the longest running live music show in the world. Either visit for a performance or take a behind the scenes tour. It began as a simple radio broadcast in 1925 and has grown into a live entertainment phenomenon dedicated to honouring country music's rich history and dynamic present with performances from country legends to contemporary chart-toppers.

If you’re a fan of the hit show “Nashville” then you’ll be wanting to visit the Bluebird Café – a small live music venue just outside of the downtown where up-and-coming songwriters perform along with those whose music is regularly in the charts, country music as well as pop and rock.

We also love the ‘Musicians Hall of Fame’ and the new ‘National Museum of African American Music’ - both well worth a visit. Also new is 5th & Broadway  - a mall filled with an array shops and great restaurants.There are also many other museums, gallery’s and attractions such as Tennessee State Museum, Tennessee State Capitol, Tennessee Sports Hall of Fame and Museum, Hatch Show Print (a printing room since 1879), Belmont Mansion and the Civil Rights Room.

Finally, no visit to Nashville is complete without an evening on Broadway which is packed full of live music venues, bars and restaurants – enjoy! 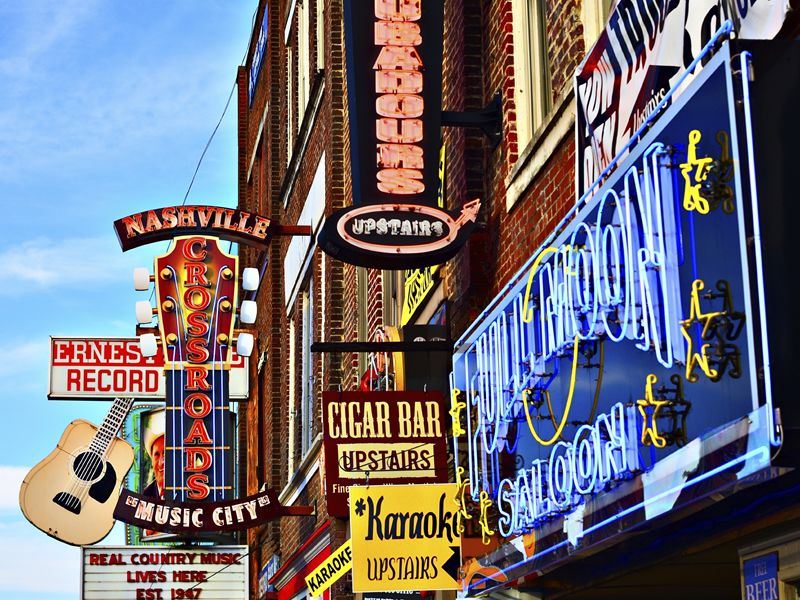 Tennessee’s number two music city is Memphis although any Elvis fans would argue it into number one slot, as this is the location of his home Graceland. It is a fantastic place to visit, even if you have only a passing acquaintance with the music of Elvis Presley. The mansion itself is perfectly preserved and is a fascinating glimpse into the life of Elvis – from the kitsch luxury of the Jungle Room to the quiet peace of the Meditation Garden which has the tombs of Elvis, his parents and his twin brother. The surrounding buildings and grounds house his cars, private jets, costumes and much more memorabilia.

There are three notable music museums in Nashville particularly worth a visit. First of all there is the Rock ‘n’ Soul Museum, curated by the Smithsonian Institution, where you can enjoy an audio tour taking you at your own pace through the ultimate Memphis music pilgrimage with instruments, costumes and other musical treasures, including original sound consoles from legendary Sun Records and Ardent Studios. Then comes the Stax Museum of American Soul Music - in just 15 years, Stax placed more than 167 hit songs in the Top 100 pop charts and launched the careers of such legendary artists as Otis Redding, Isaac Hayes, Booker T.  & the MGs and numerous others. Finally you can tour arguably the most famous recording studio in the world - Sun Studio, where the blending of blues and country music made it the "Birthplace of Rock ‘n' Roll". The four legends who recorded here are Elvis, Jerry Lee Lewis, Johnny Cash and Carl Perkins.

Memphis also played a key part in Civil Rights history, most notably with the assassination of Dr Martin Luther King Jr at the Lorraine Motel. This motel has now been turned into a truly inspirational and thought-provoking museum. We can’t recommend this museum highly enough.

After all of these museums, be sure to enjoy an evening on Beale Street, where you will find some great live music venues and bars, including the famous BB Kings where you can enjoy dinner, a few drinks and superb live performances. 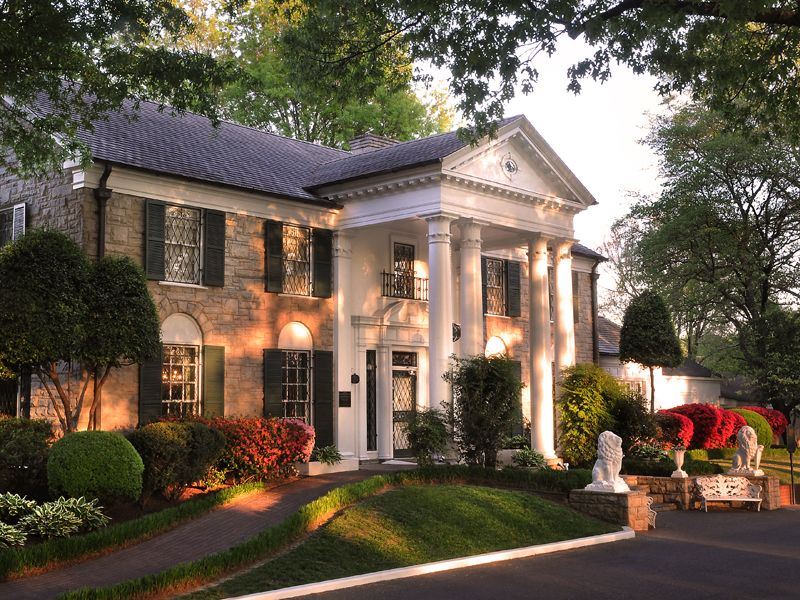 Gatlinburg and the Great Smoky Mountains

Gatlinburg is a charming town located at the entrance to Great Smoky Mountains National Park. Whilst it fills with many of visitors the town’s population is just under 4,000, giving it a nice mix of tourist destination and small-town charisma. World renowned for its natural diversity and the beauty of its ancient mountains, the Great Smoky Mountains is America's most visited national park. Its a hiker's paradise with over 800 miles of maintained trails ranging from short strolls to strenuous treks.

The Gatlinburg SkyLift Park is a fun way to see the Smoky Mountains, with having to expend too much effort. The SkyLift will take you 500 vertical feet to the top of Crockett Mountain where you will find the Sky Bridge - the longest pedestrian cable bridge in North America. Walk across at your own pace and enjoy panoramic views of the city below and Great Smoky Mountains National Park, plus the thrill of glass-floor panels half way along. You can get your breath back and enjoy refreshments at the SkyCenter, and enjoy more panoramic views from the observation and seating area at the SkyDeck. 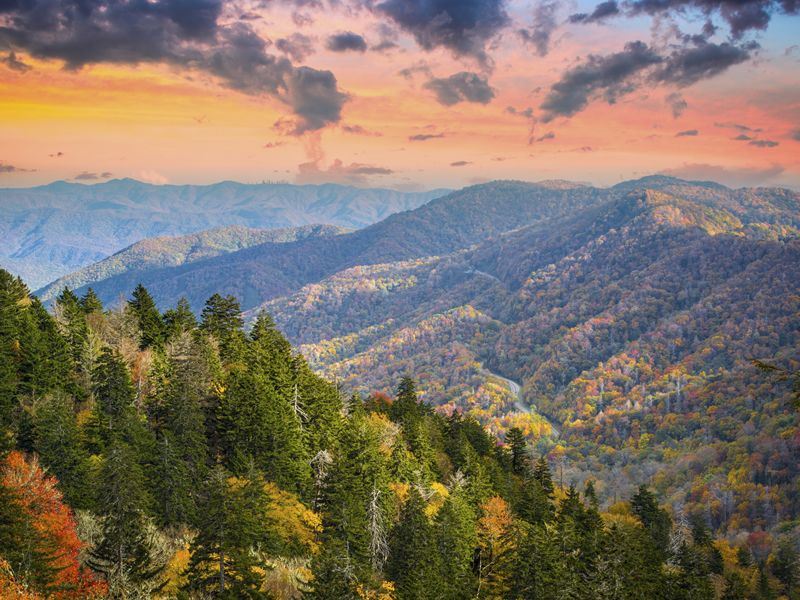 And one or two other locations in Tennessee

Chattanooga is nestled amid the Appalachian Mountains on the banks of the Tennessee River, and is home to Lookout Mountain, the Chattanooga Choo Choo, Coolidge Park’s legendary carousel and the Olympic rapids. It also has a charming downtown, world-class museums and bustling arts and shopping districts. Pigeon Forge is home to Dollywood, dedicated to all things Dolly Parton, you’ll find a Dolly Parton museum where you can see costumes from Dolly’s movie career ias well as many of her lavishly sequined gowns worn during her performances. There are also  a variety of rides—from thrilling roller coasters and water rides to family rides and things for the little ones.

Chattanooga on the Tennessee River 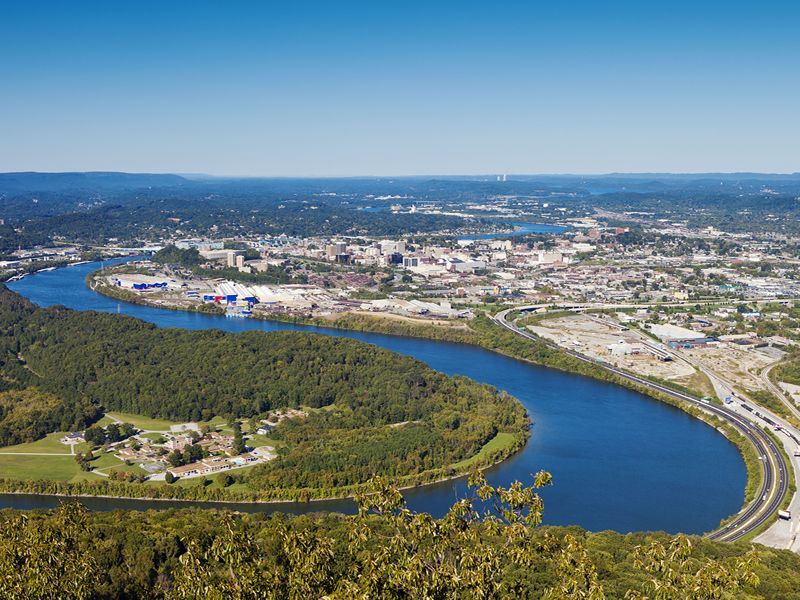 From pulled pork to sweetly slathered ribs, Tennessee is known for its mouth-watering barbecue. While barbeque styles vary by region, Memphis boasts the the title "Barbecue Capital of the World" and you can't pass through the city without making at least one stop for a pulled pork sandwich. The meat gets its flavour from the dry rub and the hickory wood used for smoking and is typically served with a tangy, tomato-based sauce. For a true Memphis experience, serve the slaw on the sandwich and baked beans on the side.

Throughout the Deep South they're fond of their food fried, and pickles are no exception. You’ll find fried dill pickles, fried hamburger pickles, and fried pickles with a hint of garlic. You'll find these throughout Tennessee and to be fair the crispy coating helps balance out the tanginess.

Two elements you’ll find in many Southern recipes are hot flavour and fried texture. In the case of chicken, both is best. Tennessee fried chicken ranges from mildly hot to outrageously spicy, and some people even top their spicy chicken with hot sauce. Nashville Hot Chicken is the city's signature dish - marinated chicken fried in a crispy, cayenne pepper coating served on a toasted bun with pickles. It was invented in the 1930s by a man named Thornton Prince, who was a notorious womanizer. One of Prince's girlfriends was mad at him, so she made him chicken for breakfast and added the spiciest ingredients that she could find, in hopes that Prince will hate the dish, but her plan backfired and Prince loved it and shared it with his friends and family. 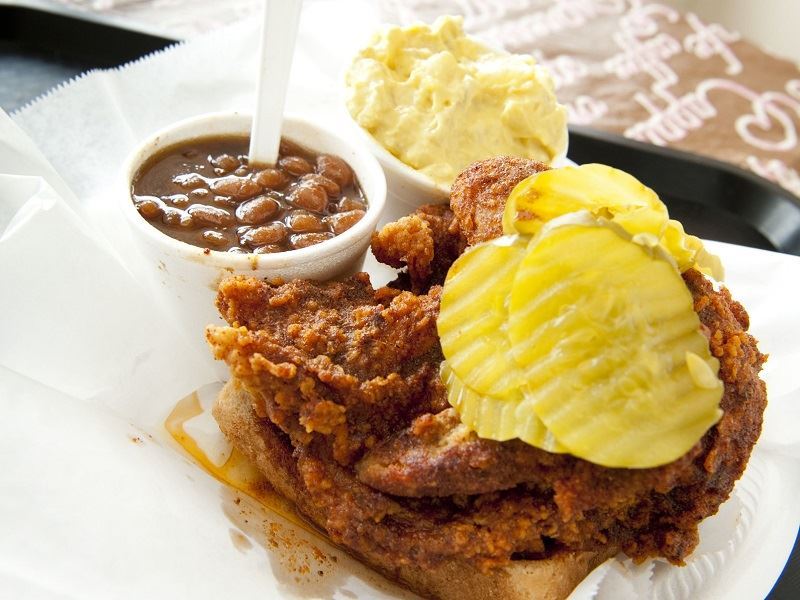 You haven’t eaten like a true Southerner in Tennessee until you’ve enjoyed a meat and three, which quite simply is when you order one meat and three side dishes from a list of daily specials.

With all the fishing that people do in Tennessee, it’s no wonder that fried catfish is standard fare at Tennessee fish fries, diners and barbecue joints. In fact, Soul Fish Cafe in Memphis is a popular restaurant entirely dedicated to Catfish offering po' boys, salads, tacos, and more. The most traditional way to enjoy Southern catfish is fried with a cornmeal coating and a side of hushpuppies and fries.

Also known as the Tennessee Mountain Cake, no two versions are alike, but they are traditionally made of layers of cake that are shaped from dough and baked without a cake pan producing a dry and brittle layer that resembles a large cookie. The layers are then stacked with an apple filling between each layer and finally, the cake is wrapped in plastic wrap and placed in the fridge overnight so the apple filling can continue to seep into the cake layers.

Other than chicken, country ham is probably the most popular meat in Tennessee, and Country Ham With Red Eye Gravy is a classic dish popular through the state. Red Eye Gravy is the product of thriftiness and ingenuity, mixing ham drippings with the strong black coffee from the bottom of the pot - it gets its name from the reddish circles of fat which form on top of the gravy.

Invented by the Chattanooga Baking Company in 1917, legend has it that a Kentucky coal miner asked the company's traveling salesman for a snack "as big as the moon," and the bakery created what's now known as a MoonPie - a combination of marshmallow and graham cracker dipped in chocolate.

According to the Tennessee Historical Society, Scottish and Irish immigrants moved to Tennessee in the late 18th century, bringing with them their distilling practices. As whiskey consumption increased, distillers began using corn rather than rye to produce whiskey. Prohibition nearly decimated Tenessee's whiskey industry, and Jack Daniel's and George Dickel were the only Tennessee whiskey distillers to survive the period.

But not all whiskey made in Tennessee is Tennessee whiskey. In order for whiskey to be considered "Tennessee whiskey," it must be produced in Tennessee, meet the legal requirements for bourbon, and use the Lincoln County process, meaning the whiskey is steeped in or filtered through maple charcoal chips before aging. The resulting whiskey is super smooth due to the charcoal filtering with a caramel-like sweetness because of its corn base). 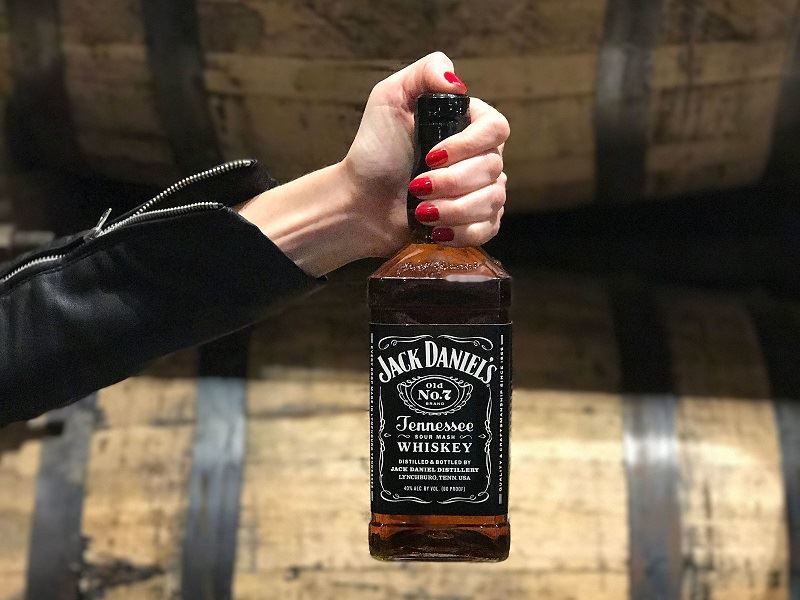