A true taste of New England

New England is a treasure trove of flavours, ingredients and techniques adopted from all over the world. The local cuisine is primarily influenced by English fare, but thanks to the influx of European immigrants and Caribbean trading routes, there’s a lot more to the regional gastronomy than than first meets the eye.

Because of New England’s proximity to the ocean, fish and seafood feature heavily, as do creamy dairy products, tart cranberries and sweet maple syrup. Stewing, steaming and baking are the most common cooking techniques, which makes the cuisine as a whole lighter and somewhat healthier than in the south, where frying and grilling reign supreme. 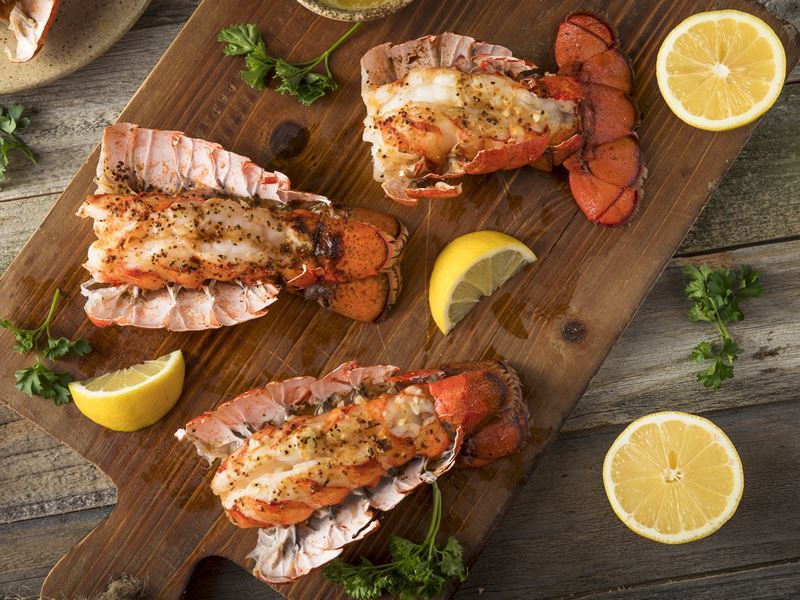 One of the most common dishes you’ll come across in New England is the humble sandwich. Unlike ordinary sandwiches you get in the UK, New England sandwiches are served in long, soft hot-dog like rolls which are slathered in butter and grilled to golden perfection. These are usually known as grinders or subs in New England. This type of grab-and-go food has been popular in the region for so long that Boston, Massachusetts claims to be the original inventor of the submarine sandwich, although two other states also claim to have created it.

It’s not just the food that has a strong local flavour — local lagers and ales abound in New England, too. From the Samuel Adams brand of the Boston Beer Company to the Sea Dog Brewing Company of Bangor, craft beers are truly thriving in New England. While alcoholic cider is yet to have its heyday in the US, the Vermont Hard Cider Company is doing its best to change that with Woodchuck Hard Cider, one of the most popular cider brands in the country. 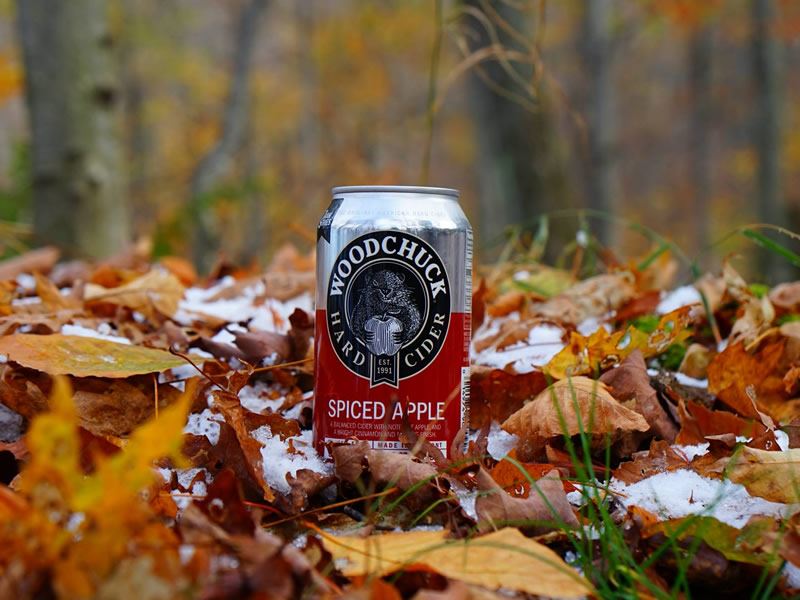 The history of food in New England

The food in New England first began to develop in 1620, when Native Americans taught the newly arrived Pilgrims how to cultivate maize. This versatile ingredient could be roasted, steamed or turned into cornmeal, making it a staple in the early american diet. Immigrants adopted other Native American ingredients, too, including blueberries, oysters and succotash, which helped liven up more bland ingredients brought over from England.

A lot of New England’s early Puritan settlers came from eastern England, and with them they brought their traditions of dairy products and baking. This resulted in the widespread of dishes such as roast turkey and baked apple pies which are still served at Thanksgiving dinners today.

By the 18th century, New England was involved in the Triangle Trade and began to take up ingredients from the Caribbean. Molasses was one of the most commonly-used sweeteners, fine rum distilleries thrived before Prohibition and desserts were improved with spices such as cinnamon, nutmeg, cloves, allspice and ginger. Although these spices were frequently used, herbs weren’t as common, since they were challenging to grow inland. Because of this, most New England dishes are seasoned exclusively with salt and pepper, although parsley and sage do sometimes make an appearance.

Traditional English food continues to play a huge part in New England cuisine today, so much so that dishes like clam chowder and baked beans are enjoyed across the whole of the US. But over the past few centuries, the cuisine has seen a huge transformation and diversification, as immigrants from Ireland, Portugal, Italy and Greece settle into the region and bring with them their own food traditions. Instead of taking over the local gastronomy, the new dishes, ingredients and cooking methods add to the cuisine, making it stronger, more exciting and more delicious for everyone.

From winter festivals where local brewers get together to showcase their best and spring celebrations doused in maple syrup to summer feasts ideal for gorging on fresh as can be seafood and autumn galas where you can sample the most delicious offerings of the harvest, here are some of the best New England food festivals.

Held each August in Rockland, Maine this drool-worthy festival dates back to 1947 when it was originally launched to boost summer tourism after the devastating effects of WW2. Today is attracts more than 30,000 hungry seafood lovers to the area each summer, all ready to dig into more than 9,000kg of fresh lobster doused in almost 800kg of butter. Thankfully, there’s a 10k race held on the final day to help you work off the excess. 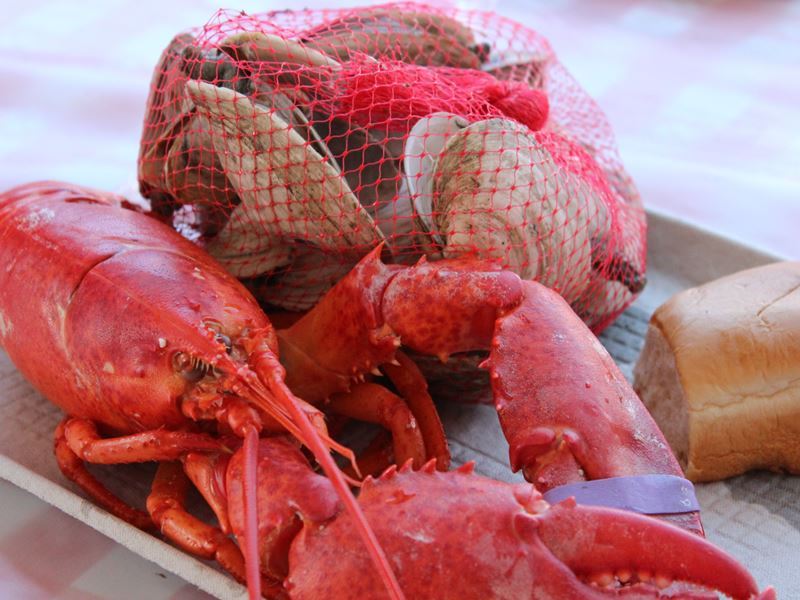 Each September, Norwell in Massachusetts pays homage to its roots with the Corn Festival. Proudly celebrated for almost half a century, this foodie spectacular sees the humble ingredient star in all kinds of dishes, from johnnycakes and corn chowder to bacon-scallion corn muffins and zesty corn salads. There are also demonstrations of centuries-old crafts, hayrides, pony rides, corn-shucking contests and even a corn pit for the little ones.

Creating a real buzz amongst wine lovers in New England, the Newport Mansions Wine and Food Festival is held each September in Newport, Rhode Island. During this two day extravaganza, visitors can taste hundreds of different wines on the spectacular Marble House lawns, watch cooking demonstrations by local and celebrity chefs and attend educational seminars from leading food and wine experts. Highlights include the Sunday jazz brunch and a gourmet gala dinner.

For one weekend each May, the town of Newport, Rhode Island becomes the epicentre of the oyster universe with a mega event that celebrates and raises awareness of the state’s aquaculture industry. During this festival, growers serve up extraordinary oysters from locations all across the state. Sample enough of the delicious offerings available and you’ll soon be a master at differentiating the variations of oysters. 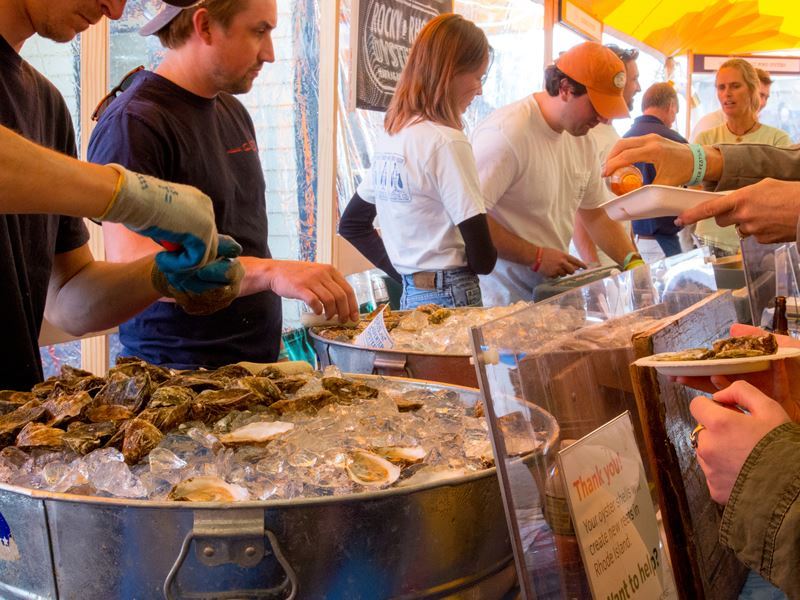 New England’s vast variety of landscapes and multicultural origins of its people make the local cuisine diverse, enticing and anything but bland. Using the seafood from its coastal waters and fresh produce from its fertile farmland alongside centuries-old cooking techniques learned from the Native Americans and more exotic methods brought overseas by immigrants, here’s just a small sampling of New England’s traditional dishes.

A true summer classic found all across New England, but especially in Maine, a lobster roll is a sandwich made up of a buttered and grilled hot dog-style roll stuffed full of lobster meat. Sometimes the lobster meat is plain, but usually it’s dressed with melted butter or mayonnaise mixed with lemon juice, salt and black pepper. 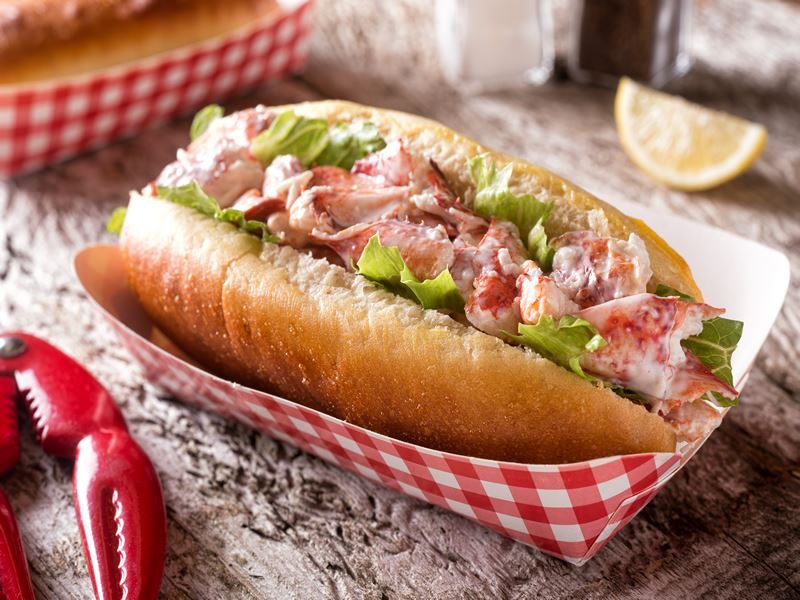 Also known as Boston clam chowder, this thick soup-like dish uses milk or cream as the base, with small chunks of potatoes, onions and clams adding extra texture. The main characteristic that sets it apart from other chowders is it’s thick consistency, even though it was originally thin when it was first created. In New England, this classic dish is usually served with oyster crackers as a garnish, or crushed and mixed into the soup to make it even thicker.

Completely different to the New England variation, Rhode Island clam chowder is red in colour because it uses a tomato broth as its base. Tomatoes and potatoes are the only vegetables in the dish and instead of being left in chunks, they’re blended down and used as thickeners.

Hugely popular in Portland and Maine, the Italian sandwich was said to have been invented in 1902 at Amato’s restaurant in Portland. This classic dish is a submarine sandwich, made from a long hot dog-style roll brimming with ham, tomato, cheese, peppers and pickles, sometimes served with a drizzle of oil and sprinkling of salt and pepper. 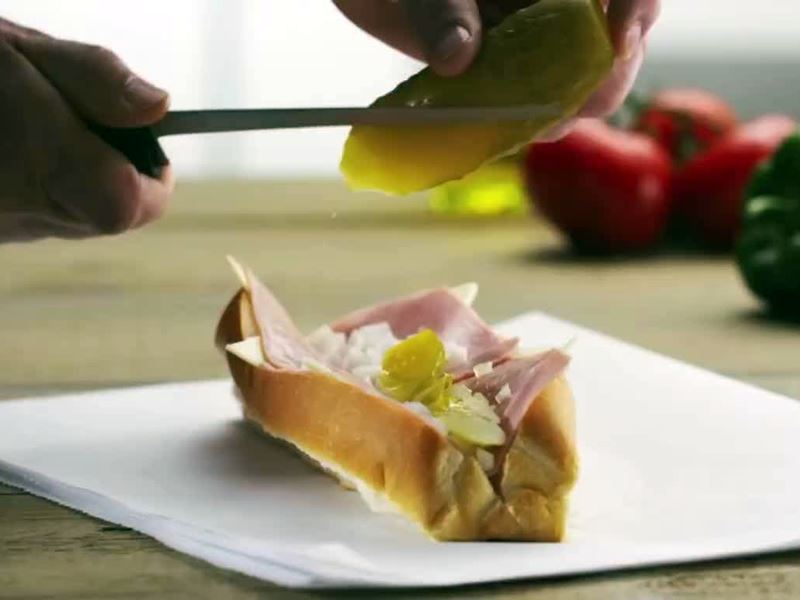 This style of pizza got its name not because of its toppings, but because it’s the type of pizza usually served in pizzerias run by Greek immigrants. The base is chewy and puffy (a bit like focaccia) and cooked in a well-oiled shallow pan — not on a pizza stone, like a typical Italian pizza. The toppings can be anything at all, as long as the tangy tomato sauce with a strong burst of oregano and small sprinkling of cheese (a combo of mozzarella and cheddar) are there.

Believed to have originated in Rhode Island, a johnnycake is a type of flatbread. To make it, yellow or white cornmeal is mixed with hot water or milk until it takes on a porridge-like consistency. The mix is then fried in a skillet and served with honey, maple syrup and other sweet toppings, just like pancakes.

Considered to be a biscuit, pie, sweet sandwich or cake, depending on who you ask, the whoopie pie is a single-serving snack made of two round pieces of cake sandwiched together with a sweet, creamy filling. The classic whoopie pie is made from chocolate cake, but you can get all kinds of variations, like pumpkin, gingerbread or red velvet cake. This sweet snack is so popular it’s the official state treat of Maine — not to be confused with the official state dessert, which is blueberry pie. 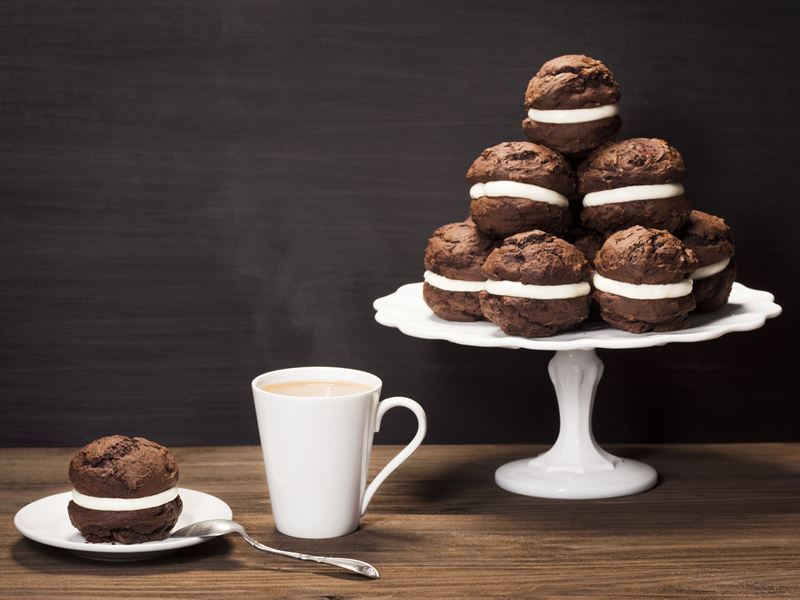 Made with wild blueberries which grow freely throughout Maine, a traditional blueberry pie starts with a homemade flaky crust, laden with a delicious filling of tart (but not too tart!) blueberries, all topped with more buttery pastry. The super juicy berries mean that the filling is usually a little on the runny side, but that’s how it’s meant to be.

Fresh shellfish, bacon, potatoes and cream come together in this authentic recipe to make one of the finest comfort food dishes New England has to offer. Tuck into a generous bowl alongside some crusty bread, or keep it traditional and stir in a handful of crushed crackers for extra texture. 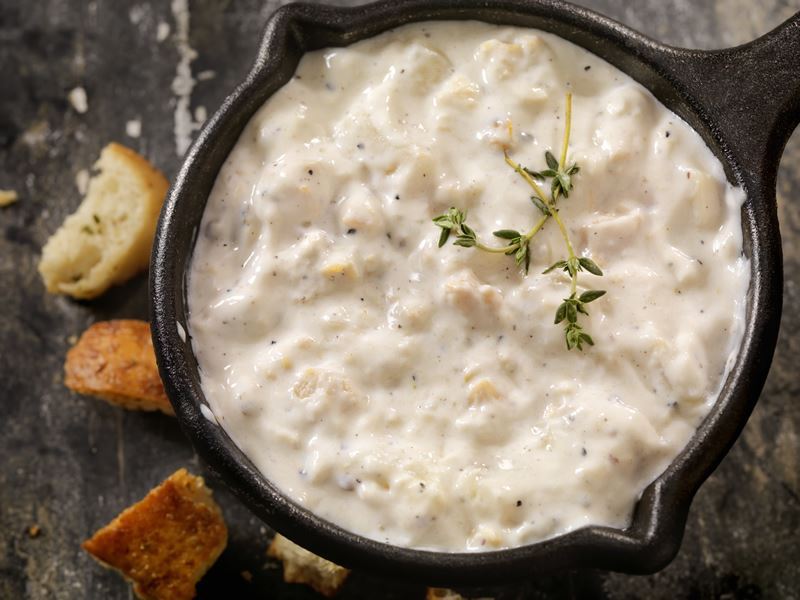 1. Place a large saucepan over a medium heat and cook the bacon for 10-12 minutes, until crispy. Leave the fat in the pan and remove the bacon. Chop it into small pieces and leave it to one side
2. Into the saucepan with the bacon fat, add the butter, onion, celery, thyme and bay leaf. Leave to cook for 6-8 minutes, stirring often until the onions are soft and translucent
3. Tip the bacon bits back into the pan, stir and reduce the heat to low
4. Place a medium-sized saucepan filled with water on a high heat and bring to the boil. When boiling, add the potatoes and cook for 5-8 minutes, until tender. Drain the water and leave the potatoes to one side
5. Increase the heat of the pan with the bacon to medium-low and gradually stir in the flour until a thick paste develops. When you’ve got a thick paste, stir and cook for an extra 5 minutes
6. Turn the heat up to medium and slowly pour in the clam juice a little at a time, incorporating it into the paste
7. Increase the heat to medium-high and add the potatoes, clam meat and salt into the saucepan. Cook and stir for 5 minutes, until the clams are tender
8. Slowly stir in the cream and white pepper. Remove the bay leaf then divide between four bowls and serve immediately while hot