The beachfront city of Santa Monica in Southern California serves as the end point to a classic road trip on Route 66, the iconic 2,200-mile-long route that was once the primary course between Chicago and the Los Angeles area. Whether you’re visiting L.A. or plan to tackle that legendary journey, it’s worth spending some time here.

Even if you only have 48 hours, there’s quite a lot that can be squeezed in to a Santa Monica stay. Of course, you could always just relax on the beach and gaze out at the endless expanse of the Pacific, but with beautiful beaches, fantastic dining and shopping, the famous pier and more, taking advantage of the myriad of offerings while you’re here is really a must. 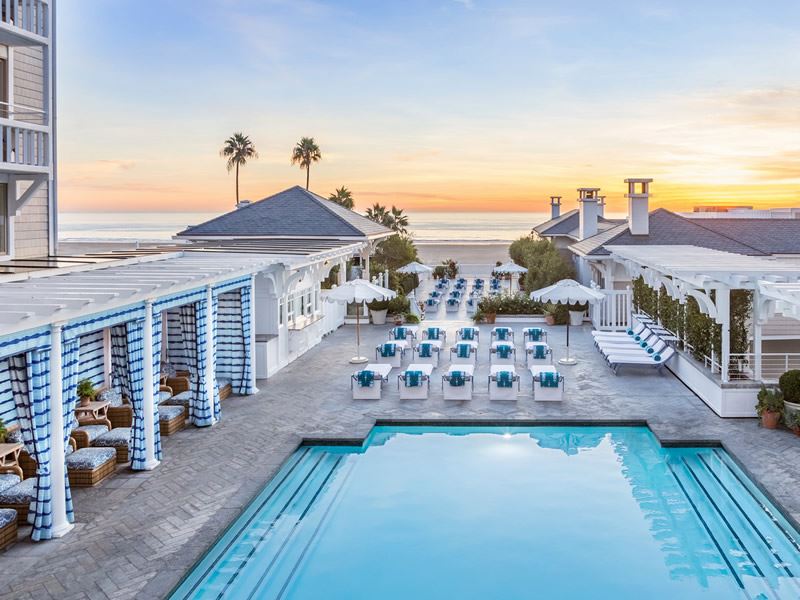 One of the first things to think about is where to book your stay, and you’ll have some outstanding options to choose from. Shutters on the Beach is renowned for its historic elegance and luxurious amenities. As the name belies, it’s right along golden sands that edge the crashing waves of the Pacific, just steps from a wealth of attractions. The property recalls the traditional architecture of California’s most popular resorts and cottages from the 1920s and 30s, opening to the beach path. Take advantage of amenities like surfing and yoga classes on the sand while enjoying spectacular views and easy access to the pier and boardwalk. It hosts a pool that faces the ocean, surrounded by cabanas and loungers for unwinding under the ever-present sunshine. There’s also a casual beachfront café and bar, a lavish spa and fitness centre while rooms come with soaking tubs and balconies – many with ocean views. 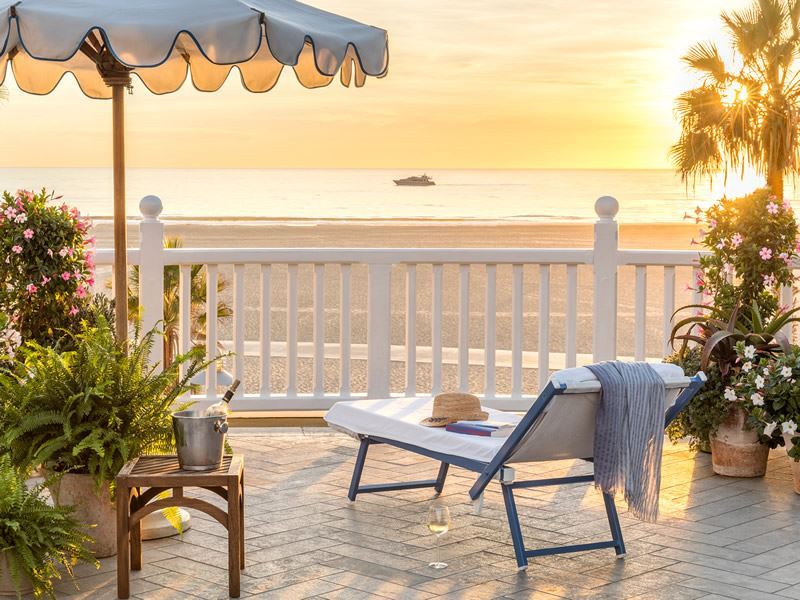 The Fairmont Miramar Hotel & Bungalows offers luxurious accommodation on gorgeous grounds close to Santa Monica Beach, including rooms with ocean views. An ideal option for those seeking privacy, it offers secluded bungalows that are shielded from the street, making it popular among Hollywood elite. The Signature Bungalows have French windows, wet bars and entertainment systems, all set within the hotel garden. Deluxe rooms in the Ocean Tower have partial ocean views from private balconies, while Deluxe Ocean View rooms boast unobstructed water views. The hotel also hosts FIG Restaurant serving seasonal, upscale fare, Exhale Spa which has an extensive menu of treatments, and there’s a pool with poolside food and drink service too. 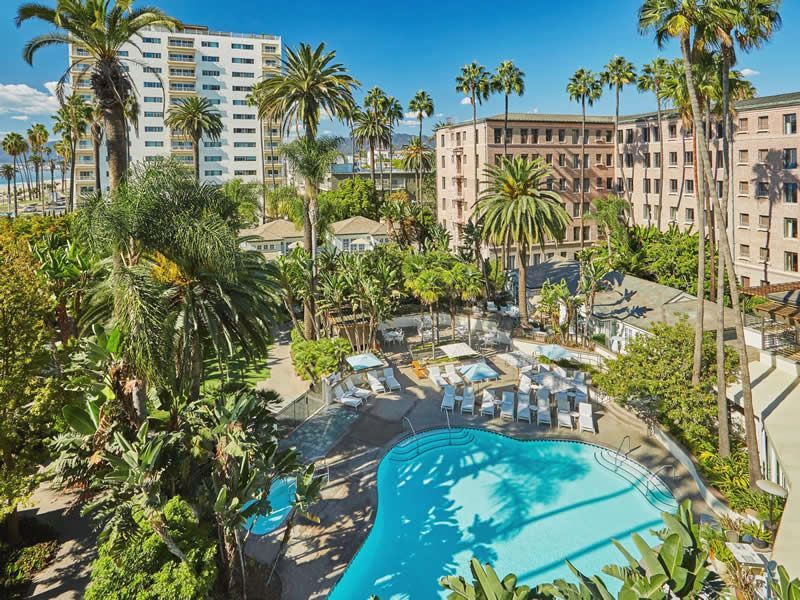 The Santa Monica Pier has been a staple on the Southern California coast for more for more than a century. An iconic landmark, if you time it right you might be able to catch one of the regular outdoor film and music events hosted here, but what its best-known for is Pacific Park. This amusement park is especially famous for its Ferris wheel – the Pacific Wheel is the only one of its kind in the world that’s solar powered and has been depicted on countless postcards, posters and brochures of the area as well as in movies and television. Take a ride during the day for a spectacular view of the coast from over 130 feet above the pier, and again at night when it’s lit with more than 160,000 sparkling lights. The park’s 1922 carousel is quite renowned as well, spotlighted in the 1973 classic film ‘The Sting.’ Pop into Heal the Bay Aquarium for a look at what’s under the water off the coast of this famous beach town. There are some 100 local species, including lots of colourful fish, sea urchins, sea horses, crabs, moray eels and more. The simulated tide exhibit reveals how juvenile fish and anemones do their very own version of surfing here. 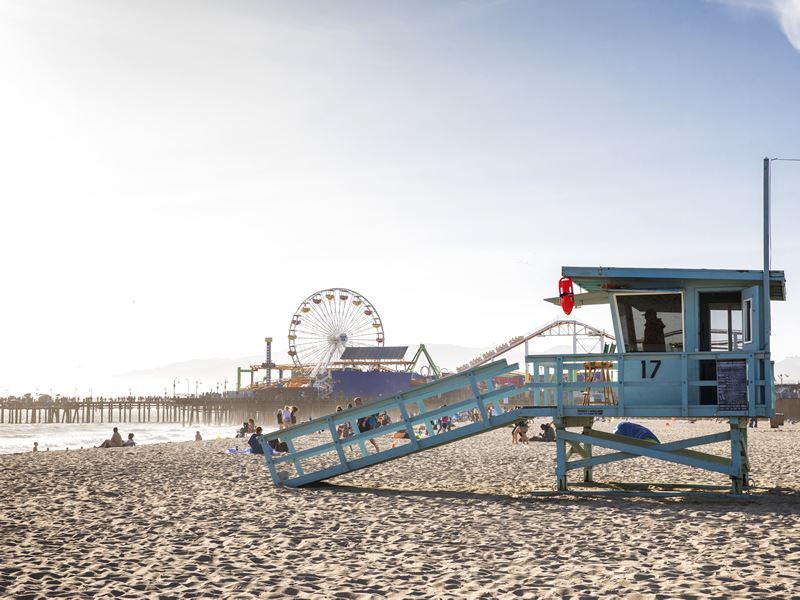 For one of the most stunning views and that picture-perfect shot you’ve probably seen of the L.A. coastline, including both the ocean and mountains, head to Palisades Park which is tucked between the beach and Ocean Avenue atop the bluffs on the northern end of the Santa Monica coast. Santa Monica State Beach runs the length of Santa Monica and there’s a path alongside it for biking, walking or jogging with a view. Although the beach is usually bustling, you can find quieter spots by taking a stroll as far as you can at either end.

Interested in aviation? Santa Monica Airport houses the Museum of Flying, which is focused on the history of aviation in Southern California. It features companies like Boeing, Northrup and Lockheed with a variety of displays and exhibits that bring airplanes and their stories to life. There are well-preserved flyable and static aircraft too, which draw many to this small institution. The California Heritage Museum calls Santa Monica home as well. It sits within a restored 1894 home that’s focused on the Victorian era in California’s history with rotating exhibits related to the region. 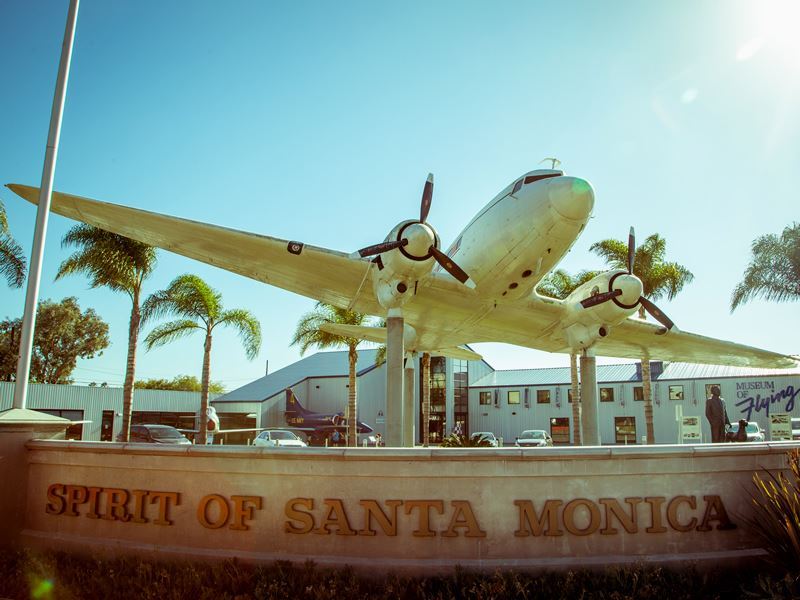 If you’re in the mood for some shopping, Santa Monica Place sits at the southern end of the Third Street Promenade. It features dozens of specialty retailers including designer boutiques along with high-end department stores with everything from Louis Vuitton, Tory Burch and Michael Kors to Nordstrom, Tiffany & Co. and Michael Kors with three floors of upscale showing centred around an open-air courtyard. While you’re on the Promenade you can look forward to an upbeat scene that includes all sorts of talented musicians and entertainers – the ideal opportunity for a break in between indulging in that shopping spree.

Main Street is only two blocks from the beach and is a popular spot among locals who come to walk their dogs, sip coffee and shop for chic clothing. There are also some great design stores and art galleries. For a European feel, Montana Avenue at the north end of town is a tree-lined boulevard that draws shoppers looking for luxury items, including celebrity clientele, to its unique stores, with bakeries, cafes and bistros tucked in between. 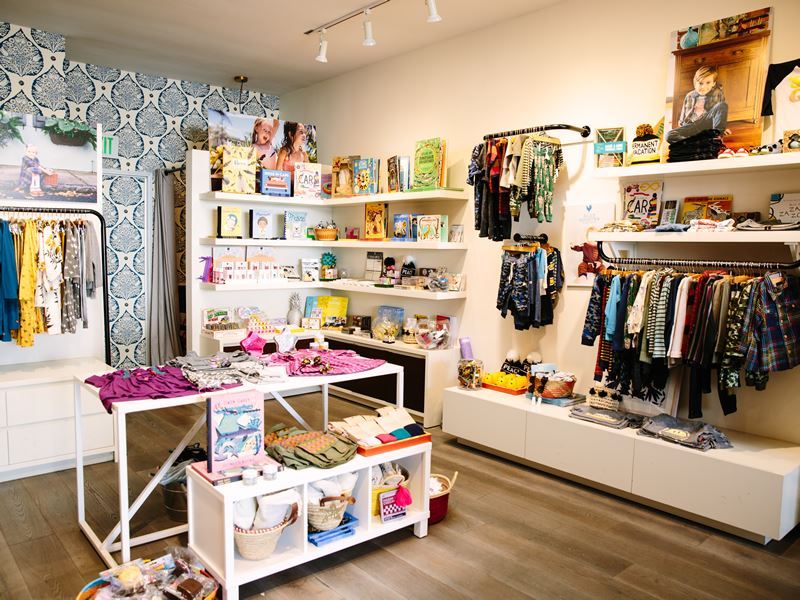 Where to sip sunset cocktails

Sipping a refreshing cocktail and watching the sun dip below the Pacific as oranges, reds, pinks and purples splash across the sky, is something you won’t want to miss. The view from the Penthouse bar on the 18th floor at The Huntley Hotel is practically guaranteed to cause your jaw to drop. You’ll be able to see all the way to the famous cliffs of Malibu Beach to the north, the ocean to the west and even glimpses of Hollywood in the distance. As you might imagine, a sunset here is pretty incredible too. If it’s a bit chilly out, there are cabanas with fire pits to warm you up. Wine enthusiasts may want to head to Elephante Beach House. This buzzing rooftop bar and restaurant is located in the heart of Santa Monica making it the perfect spot for a chilled afternoon or vibrant dinner. With an extensive wine list and Italian inspired cocktails, Elephante is a place to come and relax in Santa Monica. Beer lovers can rejoice too, as Rusty’s Surf Ranch is the quintessential California ‘beach bum’ kind of place with a chill atmosphere, local craft beers, breath-taking beachfront views, and great happy hour specials, perfectly timed for watching the sky come ablaze with colour. Stick around after dark on the weekend to enjoy live bands. 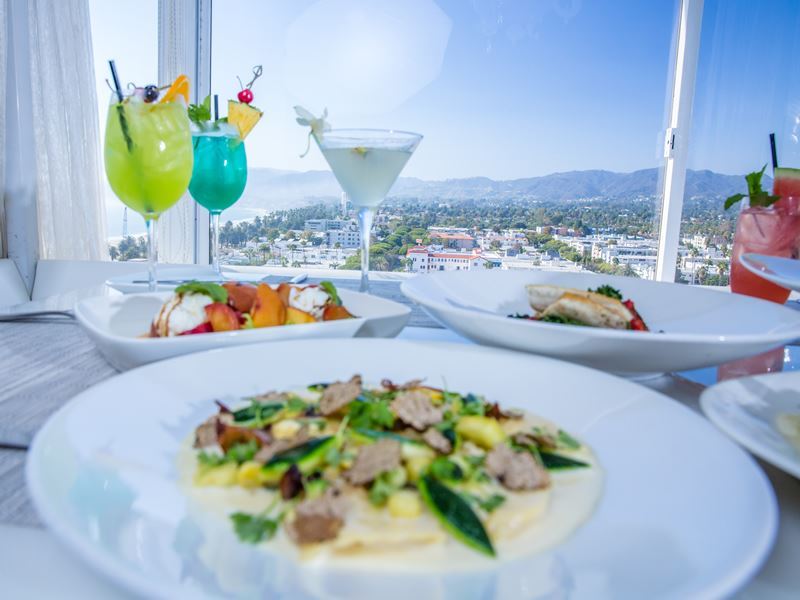 Your options are practically endless when it comes to dining in Santa Monica. You’ll find everything from juicy grass-fed burgers and farm-to-table fare to modern Mexican cuisine and plenty of fine dining. Comfort food for breakfast can be enjoyed at the Huckleberry Café, often named the best bakery on the west side of L.A. It has an order-at-the-counter menu that features delectable cinnamon rolls, huevos rancheros and fried egg sandwiches. 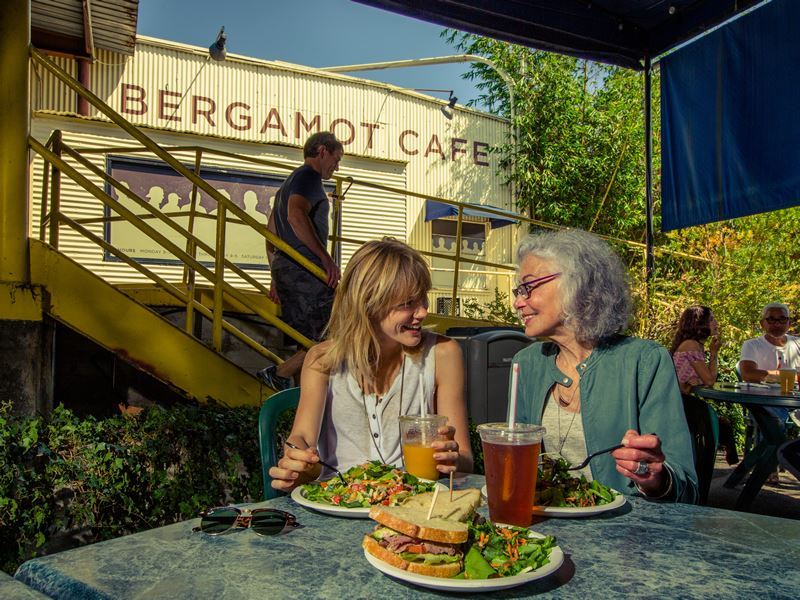 Bay Cities Italian Bakery & Deli serves one of the most iconic sandwiches in all of L.A., the Godmother. The eatery’s signature sub is loaded with ham, prosciutto, mortadella, capicola, provolone, Genoa salami, and ‘the works,’ squeezed between a crusty house-baked roll. Located within Santa Monica’s Gateway Hotel, Socalo is a beachy, all-day California canteen and Mexican pub. They serve conscientiously-sourced, seasonal SoCal Mexican fare with quick counter service at brunch and lunch while dinner shifts to full-service dining alongside cocktails featuring small-batch spirits, Mexican wines and craft beers on tap. Rustic Canyon has a seasonally changing menu with high quality farm-to-table offerings, including a fabulous kale salad with Zahidi dates, lemon, Parmesan and toasted almonds. Another favourite is the pozole, a traditional Mexican stew with a garlic and cilantro broth enhanced with citrus to highlight the mussels, clams, beans and hominy.

For fine dining on seafood, The Lobster is a Santa Monica staple. It’s stood the mouth of the pier for nearly a century, featuring glass-siding that enhances the already stunning pier and ocean views. While one might think it would be a tourist trap, the food truly delivers with lobsters arriving at their peak, beautifully steamed until the meat is melt-in-your-mouth tender, served with melted butter on the side, of course. There are plenty of other options too like Chilled Dungeness Crab and Steamed Alaskan Golden King Crab, along with a raw bar.