A beginner's guide to Lake Michigan

Bordering the states of Illinois, Indiana, Michigan and Wisconsin, Lake Michigan is the third largest of the Great Lakes by surface, second in total water volume, but hands down number one when it comes to combining recreation, beaches, and all-American cities.

Here is our guide to get you primed and ready and for a trip to Lake Michigan's majestic shores. 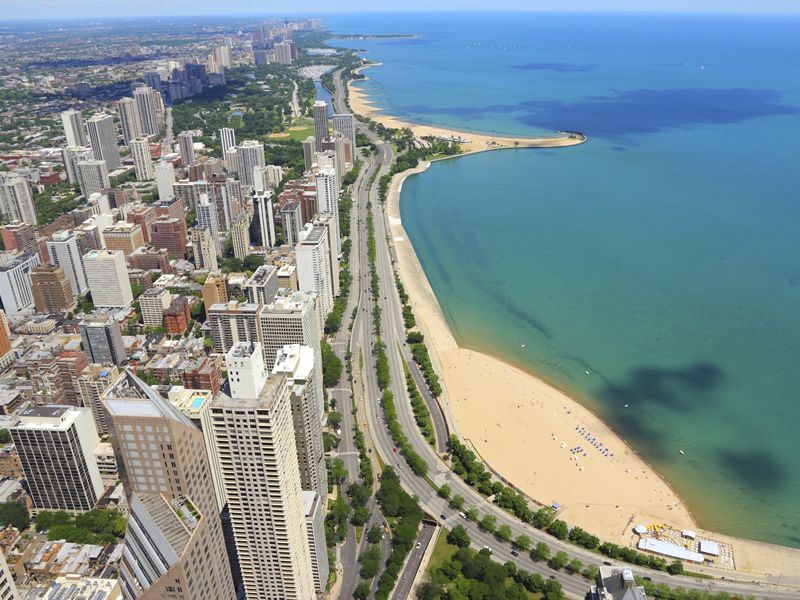 What to do
The first thing that you have to "do" when you visit Lake Michigan is to spend time on the beach doing nothing at all. If you have ever been skeptical about the quality of beaches on lakes compared to those on oceans or seas, Lake Michigan's beaches will blow you away and change your mind forever.

From city beaches in Chicago that sizzle during the summer with glamorous crowds to the huge swath of golden sand in Kenosha and the windswept world of Indiana Dunes National Lakeshore, the beaches of Lake Michigan are as beautiful as anywhere in the United States. They are especially enchanting in the coastal towns of Wisconsin and Michigan. Here, you will find beach communities that come alive in the summer to provide fun in the sun and their beaches usually come with a side of rocky cliffs, dunes, or a painted historic lighthouse.

Once you've dusted the sand off your clothes, one of the other most popular things to do in and around Lake Michigan is to set off on your own Circle Tour. A Circle Tour is a self-guided tour that takes you either halfway around the lake, or, if you're feeling ambitious, the whole way around. You aren't completely on your own though, as the Lake Michigan Circle Tour route is well-marked by signs and will guide you around, helping you navigate local highways and scenic byways that are close to the shore of the lake.

Highlights of a southern Circle Tour are the bustling metropolises of Milwaukee and Chicago, Indiana Dunes National Lakeshore, and a host of charming small towns along the coast in the state of Michigan like Holland and Pentsworth.

The northern Circle Tour encompasses more of a smaller town feel and highlights places like the self-proclaimed cherry capital of the United States, Traverse City. You'll also see Mackinaw Island (you'll have to swap your car for a bicycle here as it is a car-free island), and Door County, Wisconsin, which is known as the Cape Cod of the Midwest due to its secluded and classic beauty.

At the end of your northern or southern Circle Tour, board the car ferry in either Ludington, Michigan or Manitowoc, Wisconsin and return to your starting point, or just keep going to complete the circle!

Where to eat
Chicago is without a doubt the culinary capital of Lake Michigan, home to a smorgasbord of unique signature dishes. If there is one you cannot leave town without trying, though, it has to be deep dish pizza. You can find famous versions of this Chicago delicacy at Lou Malnati's, Giordano's, or Pequod's and all three put their own unique spin on things.

Milwaukee comes in a close second as far as food options, featuring many "brew pubs" that combine the city's famous brewing history with modern bar menus.

As far as the smaller coastal towns on Lake Michigan, you will find many historic old restaurants and fun ice creameries that have served tourists during the summer for years; be sure to join them.

Where to stay
Most cities on Lake Michigan are home to a myriad of hotels, inns and bed and breakfasts.

Several grand historic hotels dot the shoreline, but none purvey this atmosphere quite like the aptly named Grand Hotel in Mackinaw Island, Michigan. Five former U.S. Presidents have spent the night at this hotel and The Grand is famous for transporting all its guests to and from the ferry dock by horse-drawn carriage.

Cottages and lake house rentals are plentiful all over Lake Michigan too, and this is definitely the way to go to stay like the locals.