The Hawaiian Islands are on just about everyone’s travel bucket list. A dream holiday, this exciting small group tour will take you to three of the most popular: Oahu, The Big Island and Maui, for an island hopping adventure you’ll never forget. Snorkel among the tropical fish in crystal clear, azure waters and lounge on soft, powdery white sands. Hike and bike volcanos, become immersed in Hawaiian culture, and experience Pearl Harbor, the site of one of the most significant moments in U.S. history, all on one amazing trip.

Maximum party size on this tour is 13 people, with lots of exhilarating activities included such as biking and hiking, so a reasonable level of fitness is required. 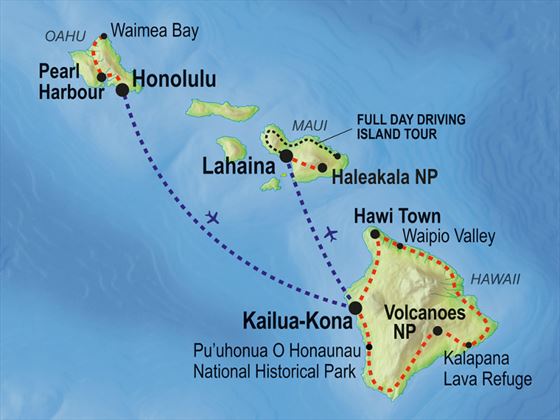 Welcome to the Aloha State, and the Island of Oahu, where your adventure begins in the capital city of Honolulu. There’s so much to do here, you might want to plan to arrive early and enjoy some of its popular sites and attractions, perhaps touring Dole Plantation, home to the world’s largest maze, or snorkeling at Hanauma Bay, the most famous of all the snorkeling beaches in Hawaii, due to its striking white sands, abundance of fish, and calm, shallow waters. You may want to include a visit to the Polynesian Cultural Center, a Polynesian theme park for you can get immersed in the Pacific Islands’ rich heritage, take part in traditional, hands-on activities, and more.

One of the first stops on the agenda is Pearl Harbor, where millions of visitors come every year to see this place where the Second World War began for America back on December 7, 1941 in a surprise military attack by the Japanese. While a visit here is a sobering experience, as you’ll stand over a grave site where nearly 1,200 men lost their lives, it provides an in-depth look at one of the most significant moments in U.S. history. Your visit includes the Battleship Missouri, the Arizona Memorial, the Pacific Aviation Museum, the Pearl Harbor Visitors Center, the Submarine Museum and Park, and the Oklahoma Memorial, as well as transportation to and from Ford Island. To lighten the mood afterwards, embark on a scenic drive along the coast from North Shore Beach House to Paradise Point to watch a glorious sunset and the surfers that skillfully ride the waves.

Watch Oahu fade in the distance as the Big Island of Hawaii comes into view. When you land, notice the difference in the landscape and flora. Culture enthusiasts will especially appreciate the visit to Pu’uhonua O Honaunau National Historical Park, a 180-acre national historic park that was once the home of royal grounds and a place of refuge from the death penalty for ancient Hawaiian lawbreakers. Its location is idyllic, surrounded by palm-lined beaches, wooden carvings, a huge lava rock wall and reconstructed villages. You’ll see the many ki’i, carved wooden images that surround the temple and house the bones of the chiefs. Next is a visit to Volcanoes National Park and a hike on the Pu’u Kilauea Iki Crater trail, famous for its spectacular views of the Kilauea Iki crater, and the last eruption that occurred in 1959. You’ll make your way through lush rainforest down to the floor of the solidified, though still steaming lava lake, where you can peer into the vent that gushed lava to heights of 1,900 feet, the tallest lava fountain that’s ever been recorded to date.

In the morning, be sure your water bottles are full and ready to go for a day of hiking on the Crater Rim Trail. One of the most impressive trails in the park, the 11.3-mile route circles Kilauea’s summit caldera and boasts a stunning variety of volcanic features and ecosystems. You’ll view one-of-a-kind scenery, incredible plant life, steam vents, desert and rainforest terrain, as well as lots of wildlife. After dark, embark on a drive to visit the Kalapana Lava Refuge, where you’ll see the active lava light up the night’s sky – being so close to an active volcano is an experience few can say they’ve ever had.

Your stay her includes boarding a Zodiac boat from Kealakekua Bay Park to a secluded bay. Here you’ll be able to discover the colourful underwater world with a snorkel and mask, marvelling at the exceptional diversity of coral and fish. Heading to Kona on the island’s west coast, you’ll have the opportunity to swim with manta rays, one of the most graceful, serene creatures in the sea. Enjoying tasty barbecue for dinner at TJ'S BBQ By The Beach is on the agenda too.

The breathtaking Waipio Valley is on the schedule too. Often described as a kind of “Shangri La,” it’s nearly cut off from the outside world, but you’ll be able to explore it via a guided 4X4, with an introduction to Hawaiian culture and history included. After following the steep, twisting road into the valley, a long, black sand beach at the edge of azure ocean waters comes into view, along with colourful ginger trees, hibiscus and orchids, while papayas, bananas, mangoes, grapefruit and avocados grow on the fertile valley floor. A visit to the small town of Hawi is next. This historic “biggest little town” as if’s often referred to, was once the busy hub of the sugar industry in North Kohala. Today, the colourful vintage buildings along its streets have been transformed into art galleries, boutiques, cafes and restaurants.

Although it’s always hard to say goodbye to the Big Island, the magnificent island of Maui awaits. It was formed by two volcanoes, most notably the 10,023-foot-tall Mt. Haleakala, which inspires visitors with its jaw-dropping sunsets and opportunities for outdoor adventure. After a drive to Lahaina, a former whaling village where the island royals hung out in the 19th century, you’ll have the rest of the day to explore. Discover the town’s historic charm, with its colonial buildings proudly displaying their date of origin. See the local prison, built in 1853 to lock up delinquent sailors, and browse the galleries, cafes and trinket shops that line the surrounding streets. Nearby is Kaanapali Beach, a perfect spot to relax, with its three-mile stretch of white sands sitting at the edge of crystal clear, aquamarine-hued waters.

Your next day will be experienced on two wheels, exploring the island and its famous 23 mile downhill by mountain bike. Just going up the mountain in Haleakala National Park is an experience to remember, let alone biking down. There’s nowhere else you can climb from sea level up to over 10,000 feet in less than an hour. Then, up at the summit, you’ll peer into the seven-mile-long, two-mile-wide crater before travelling the 23 miles back down, dropping 3,000 feet in 10 miles, and winding around 29 switchbacks, stopping to take in the awe-inspiring views of west Maui and the surrounding Pacific, while passing huge stands of eucalyptus trees, grazing land, farms and botanical gardens along the way.

While you’ve gotten a good taste of Maui’s striking beauty, on your final full day you’ll enjoy a driving tour that will allow you to experience even more of what it has to offer, with stops at includes Puaa Kaa Wayside and Kaumahina Wayside state parks, Waikani Falls, Keanae Lookout and Peninsula, Waianapanapa State Park, Hana Town, Wailua Falls and the Pools of Oheo. If you’d rather spend your last day soaking up the sun and the sand, that’s an option too.

While morning signals that it’s time to go, if you can’t bear the thought of leaving, why not book a few more nights and extend your island dream?

Prices correct as at 6pm on 09 Jul 2020. Please call for final price. Prices are per person based on 2 adults sharing a room. Other durations available - call for quote.

Daily departures . Different hotels of a similar standard may be used on certain departures. Parking fees are not included. Supplements may apply on dates within certain dates during peak travel periods. (GAA)