This 14 night escorted tour takes you to stunning Rocky Frontiers in the west of the USA, starting in Denver. You’ll visit the Rocky Mountain National Park, Mount Rushmore National Memorial and come face to face with historical American Presidents.  Your journey continues to Rapid City, the Bighorn Mountains and to Cody where you will visit the Buffalo Bill Museum. Head into Yellowstone America's first national park and witness the geysers, mountain ranges and rivers, continue from Yellowstone to Grand Teton National Park. After time in Salt Lake City you’ll marvel at the incredible rock outcrops of Moab and Canyonlands National Park.  Travel through Navajo Reservation to Gallup which has barely changed since Route 66's heyday, onto Albuquerque, Santa Fe and Colorado Springs before finishing back in Denver. (ATI) 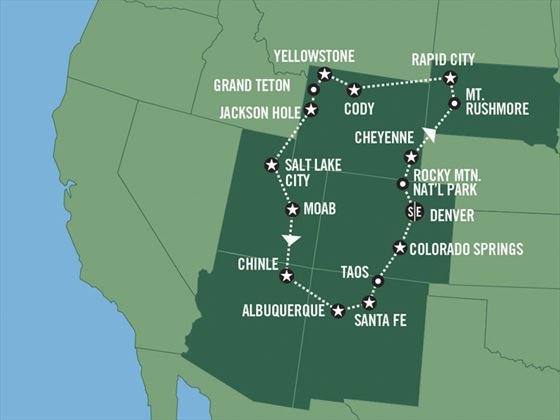 With the impressive Rocky Mountains as a backdrop, Denver effortlessly blends the city’s Old West heritage with today’s modern skyscrapers and urban energy. Upon arrival at Denver International Airport, transfer independently to your hotel where will you will meet your Tour Manager.

This morning enjoy a short city tour of the “Mile High City”, including the gold-domed State Capitol whose 13th step on the west side of the building is exactly one mile above sea level. Leave Denver and take the short, beautiful drive to the impressive Rocky Mountain National Park where you’ll feel like you’re on top of the world. And if you thought the journey to the park was beautiful, just wait until you experience Trail Ridge Road. Known appropriately as the “Highway to the Sky”, and offering incomparable views in every direction, Trail Ridge Road winds past countless peaks, through tundra high above the treeline and crosses the Continental Divide at 12,183 feet. Continue to Cheyenne, Wyoming’s capital city that embodies the spirit of the Old West. Considered the nation’s railroad capital, Cheyenne is home to a collection of steam engines, including Old Number 4004, the world’s largest steam locomotive and one of the eight remaining Big Boys on display throughout the country.

Today, crossing back into Wyoming en route to Cody, you’ll travel through Bighorn National Forest where undisturbed rolling hills, alpine lakes, craggy cliffs, thick pine forests and the Bighorn Mountains dominate the landscape. Upon arrival in Cody you’ll visit the Buffalo Bill Museum. Celebrating the spirit of the American West, including the culture and art that bring the heritage of Wyoming alive, the Buffalo Bill Museum focus’ on the life and times of William F. “Buffalo Bill” Cody, the town founder and a living legend. In the evening enjoy attractions that include rodeos, gun fight reenactments and cowboy music.

Today, take an unforgettable journey into America’s first national park and nature’s wonderland - Yellowstone National Park. Here, the Earth is in action with geysers, mountain ranges and rivers, waterfalls, and ancient volcanoes. You will see the iconic sights of Old Faithful, Mammoth Hot Springs and Yellowstone Canyon. This mountain wildland is also home to eagles, grizzly and black bears, buffalo, elk and much more, so you’re bound to see wildlife wherever you go.

An exquisite mountain landscape where jagged peaks tower more than a mile above the Jackson Hole valley, Grand Teton National Park is located just south of Yellowstone. Rising above a scene rich with extraordinary wildlife, pristine lakes and alpine terrain, the Teton Range dominates the park’s skyline and stands as a monument to the people who fought to protect it. A stop will be made at the Snake River Overlook, a location made famous by Ansel Adams, where views of the Snake River flowing along the mountains puts the size of the Tetons into perspective. Continue to Jackson Hole, an area encompassed on all sides by mountain barriers.

Today’s journey takes you through scenic Southern Idaho to Salt Lake City, the Mormon state of Utah’s capital and most populous city. Upon arrival, enjoy views of the State Capitol Building & downtown’s historic Temple Square, home Salt Lake Temple with its six spires & domed Tabernacle of the world-famous Mormon Tabernacle Choir. This evening we recommend dining at The Roof Restaurant (optional), where you can enjoy the extravagant buffet and inspiring views of the Salt Lake Valley & Temple Square.

Today we visit Canyonlands National Park, we invite you to explore a wilderness of countless canyons & fantastically formed buttes carved by the Colorado River & its tributaries. Rivers divide the park into four districts: the Island in the Sky, the Needles, the Maze, & the rivers themselves. Visit some of the most scenic spots in the Island in the Sky mesa that rests on sheer sandstone cliffs over 1,000 feet above the surrounding terrain.

Heading south this morning you’ll pass through Provo home to Brigham Young University, en route to one of Utah’s "Mighty Five" - Arches National Park. Once in the park you’ll discover a landscape of contrasting colours, landform and textures unlike any other in the world. With over 2,000 natural stone arches, in addition to hundreds of soaring pinnacles and giant balanced rocks, this red rock wonderland will amaze you with its formations and inspire you with its most unique scenery.

Crossing into Arizona where traces of a rich history, miles of cacti in every size, shape and style, and natural wonders mark the awesome terrain, you’ll make your way to Chinle, gateway to Canyon de Chelly National Monument. Located entirely on Navajo tribal lands and known for its steep canyon walls dotted with hundreds of ancient pueblo ruins. Here, distinctive architecture, artefacts and picturesque vistas of rocky outcroppings are all remarkably preserved, providing an insight into the lives of the canyon’s earliest inhabitants.

Leaving Chinle, today’s journey takes you through the Navajo Reservation and dramatic lands of western New Mexico to Gallup. Having barely changed since Route 66’s heyday, Gallup serves up a slice of Americana rarely seen nowadays along with one of the best strips of neon signs you’ll see anywhere on the old route. Stroll the Plaza, dine at one of the many restaurants, shop for unique gifts from the Southwest in one the stores or galleries.

This morning, venture onto the Turquoise Trail, the National Scenic Byway linking Albuquerque & Santa Fe. Named for the rich turquoise deposits found throughout the area, & offering views of the Sandia Mountains & Cibola National Forest. Santa Fe, the nation’s oldest capital city, is nestled in the foothills of the Rocky Mountains, set against a back drop of landscape that inspired its own Georgia O’Keeffe’s startlingly colourful paintings, this is a paradise for history buffs and cultural explorers. Ample leisure time this afternoon provides the perfect opportunity to explore world-renowned art galleries.

Travel from Santa Fe to Taos where you’ll follow alongside the Rio Grande as it winds its way through canyons & red-rock cliffs before rising to a spectacular view of the river gorge & rich landscape of Taos valley. Visit the only living Native American community designated both a World Heritage Site by UNESCO & a National Historic Landmark, Taos Pueblo, whose multi-story adobe buildings have been continuously inhabited for over a 1,000 years. Heading north from Taos back into Colorado, you’ll discover the scenic beauty & benign climate that has lured visitors to Colorado Springs for years. Stop at Garden of the Gods, where you’ll delight in one of the most photographed landscapes. Imagine dramatic views of the foothills & 300 foot towering red sandstone rock formations set against a backdrop of snow-capped Pikes Peak & brilliant blue skies.

Today your tour comes to and end. It's time to head to Denver International Airport for your return flight home.

Cowboy Country and Yellowstone by Motorhome