Oregon’s breathtaking Pacific shoreline is one of America’s most photographed areas. It boasts breathtaking natural beauty along its roughly 300-mile stretch that includes wild beaches where dramatic rock formations rise from the crashing waves, wind-sculpted dunes, forested sea cliffs with moss-draped trees, waterfalls and abundant wildlife, along with plenty of charming beach towns in between. As the Pacific Coast Highway follows its length, it makes it easy to create your own adventure of a lifetime - whether you head north-to-south or explore it in reverse, you’re in for a real treat. 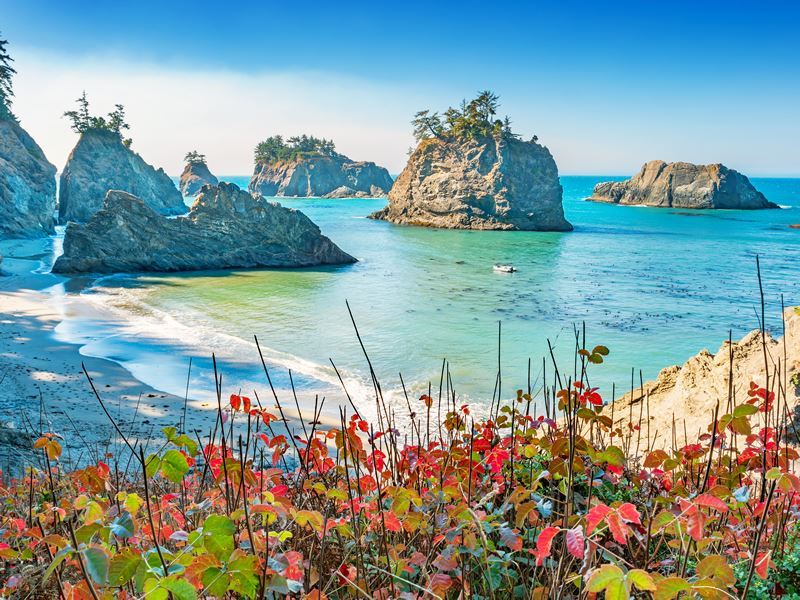 Located at the north end of the coast where the Columbia River and Pacific Ocean meet, Astoria is an especially picturesque city and one of the state’s most historic, although it may best be known among movie buffs as the setting for the 1985 cult hit, “The Goonies.” Before heading to the beach, it’s worth exploring this enticing town with its grand Victorian architecture that includes the beautiful Favel House Museum where stepping inside is like walking into the 19th-century. By climbing the more than 160 steps to the top of the Astoria Column, which sits atop the city’s highest peak, you’ll be rewarded with a stunning 360-view of the surrounding snow-covered Cascade Mountain peaks to the south and east, the Columbia River to the north and the Pacific Ocean to the west. 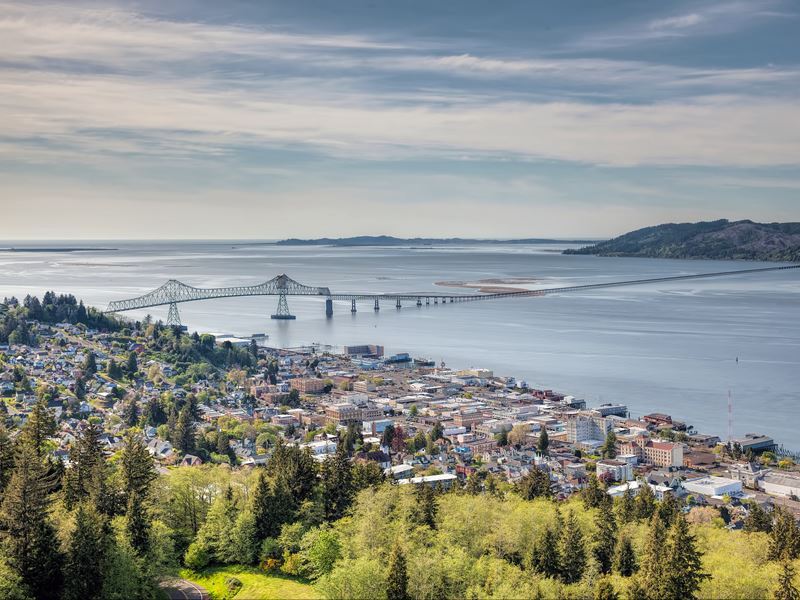 Fort Stevens State Park sits at the northwest tip of Oregon and offers the chance to explore the area’s fascinating history, including a Civil War military fort as well as recreational activities like beachcombing, freshwater swimming, nature trails and wildlife viewing. The highlight here is the Peter Iredale shipwreck, one of the most accessible on the west coast. It ran aground over a century ago, with the remains still visible, making for some impressive photos, perhaps even more so on a stormy day. 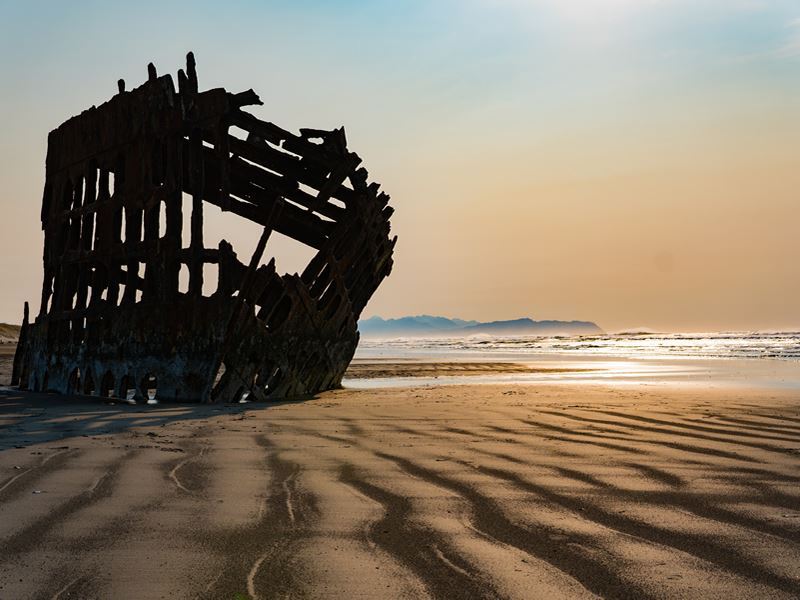 Seaside is a popular tourist destination for families and all sorts of other visitors, providing access to a three-mile stretch of sandy beach, numerous attractions and a wide range of shopping and dining options, like Bell Buoy, famous for its rich, creamy homemade clam chowder and fresh halibut fish ‘n chips. At the Seaside Aquarium you can check out lots of marine creatures and even feed the sea lions, while the Funland Arcade offers a variety of amusements from video games and pinball to bumper cars and skee ball. If you want to ride the waves, there are multiple surf shops that provide gear rentals as well as surfing, skim boarding and kite boarding lessons. There’s plenty of room on the sand for activities too, like sandcastle-building, flying a kite or tossing a Frisbee. Check the tide tables and head out about an hour or two before low tide and you’ll discover an endless array of sand dollars spread across the shore. 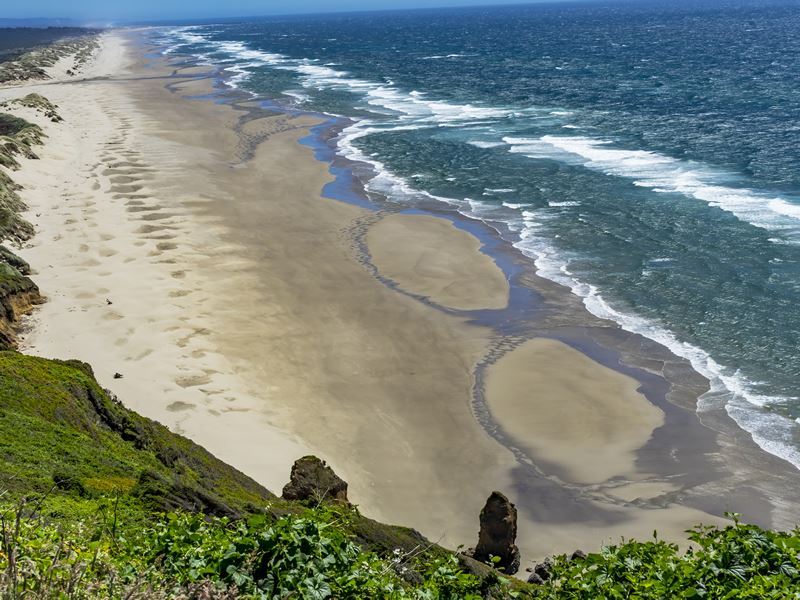 Cannon Beach is world-renowned for its magnificent scenery that includes a long stretch of golden sand and the iconic 235-foot-tall monolith known as Haystack Rock, the largest of the massive rock formations that rise out of the Pacific just offshore, providing nesting grounds for seabirds, including puffins. During low tide you’ll be able to search through tide pools filled with all sorts of creatures, like purple and pink starfish and sea urchins, sea cucumbers, red rock and purple shore crabs, anemones and nudibranchs. Visit in early June to witness the annual sandcastle-building competition, with professionals creating fantastic, huge works of art, all sculpted from the fine sands.

Ecola State Park is a must-visit just minutes from town. Here you can walk through old growth rainforest on trails that lead to views of Tillamook Rock Lighthouse and the Pacific Ocean. Afterwards enjoy a picnic atop the grassy cliffs while watching the elk that can often be seen grazing in the meadows nearby. Cannon Beach itself is an artist community/bustling tourist destination, complete with boutique shops, art galleries, high-end waterfront restaurants, wine bars and luxurious resorts. 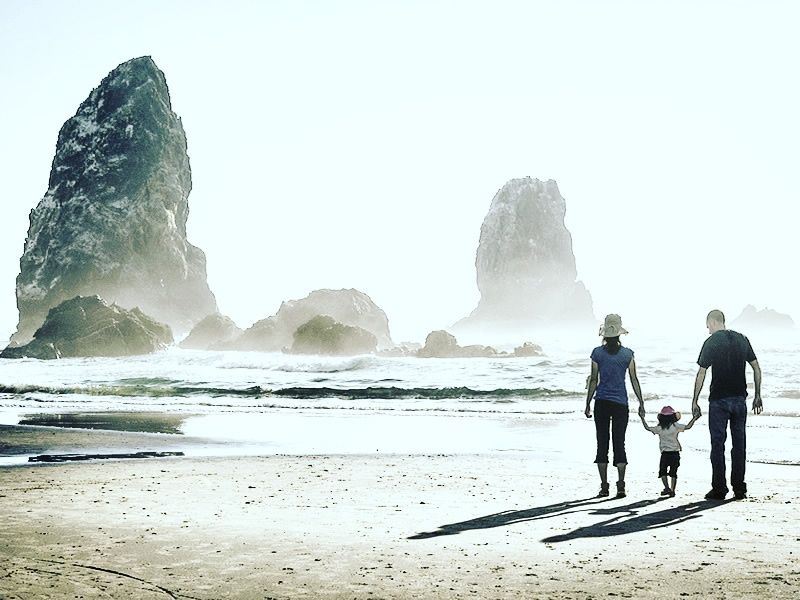 Along Oregon’s central coast a little over 80 miles south of Cannon Beach, Lincoln City is a popular beach town with seven miles of soft sands where you can hunt for treasures and perhaps even find an Oregon glass float. Every year 3,000 handcrafted glass floats are hidden on the beach, above the high tide line, for visitors to discover. At the southern edge of the city, Siletz Bay is a popular place for digging clams on the mudflats at low tide as well as wading and building bonfires from the endless driftwood that’s strewn about. A 685-acre lake with calm waters protected from the coastal winds can be found here too. Devils Lake is a popular spot for swimming, fishing, paddle boarding, kayaking and boating, with watercraft rentals available. 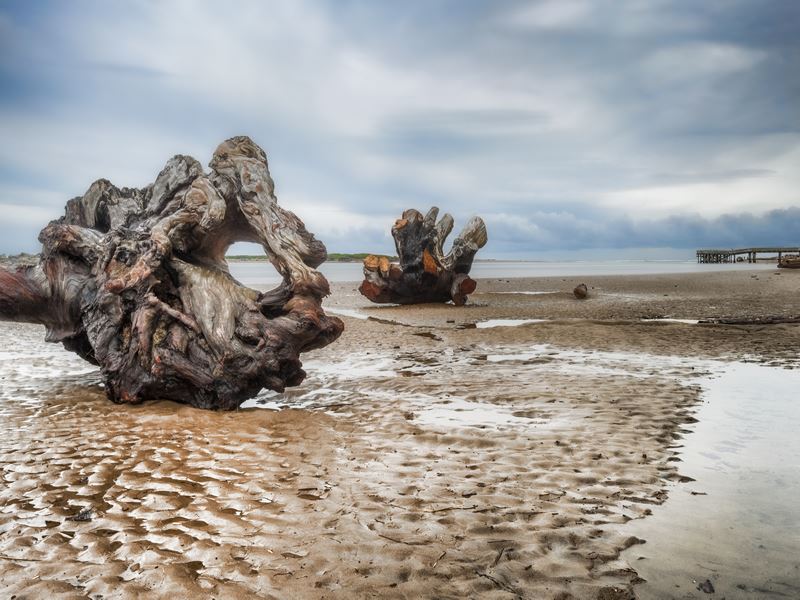 Just 25 miles further south, Newport is a beautiful beach town especially popular with families thanks to its long list of kid-friendly attractions like the Hatfield Marine Science Center and the Oregon Coast Aquarium that was once home to the orca whale star of the movie “Free Willy.” While you won’t find any whales here today, it houses many other creatures from the sea, including five species of sharks as well as giant Pacific octopus, sea lions, harbor seals, sea otters and a variety of birds. The open-air Seabird Aviary is one of the largest of its kind in North America and features tufted and horned puffins, black oystercatchers, rhinoceros auklets, common murres and many others. The tufted puffin is a favourite with its bright colours and standout markings.

The aquarium isn’t the only place you’re likely to spot sea lions, with many found on the beaches nearby, which offer all the usual activities on the sand like flying kites and building sandcastles. Newport is also home to the state’s tallest and second oldest active lighthouse. Yaquina Head Lighthouse was built in 1873, constructed using over 370,000 bricks on a narrow point of land naturally created by lava flow millions of years ago. It’s an ideal spot for picnicking with jaw-dropping ocean views. At low tide, the light is surrounded by tide pools that are fun to peek into and discover a myriad of colourful life inside. 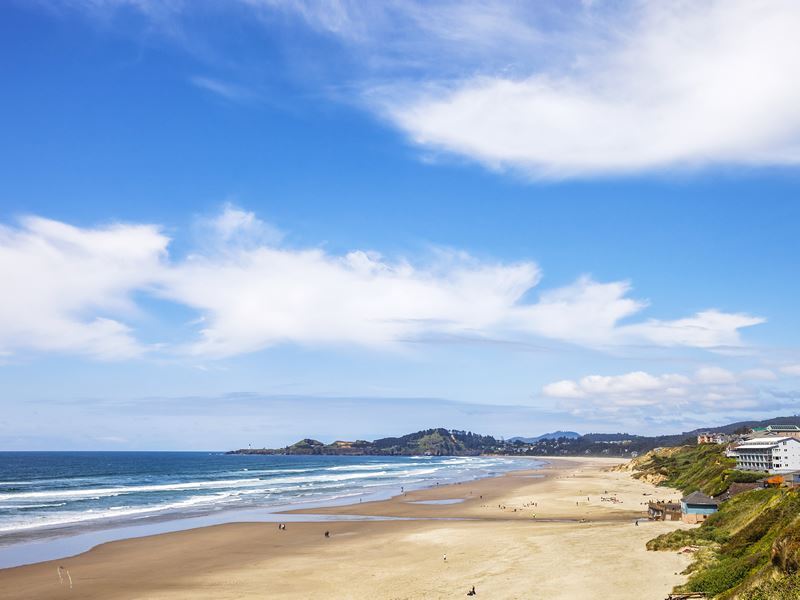 The tiny village of Yachats sits at the foot of Cape Perpetua and may be one of the most alluring spots on the entire stretch of shoreline and is especially famous for Thor’s Well. This remarkable natural wonder is a gaping sinkhole in the Pacific that never seems to fill, despite the continuous water that flows into it. It’s best viewed at high tide, or during a storm when the waves violently wash over the boulders before falling back through the hole. While the “well” is a hole in the rock that seems to magically drain seawater, it’s only about 20-feet deep. Those who visit during the springtime should bring a pair of binoculars, keeping an eye out for the gray whales that swim close to shore on their migration route north. 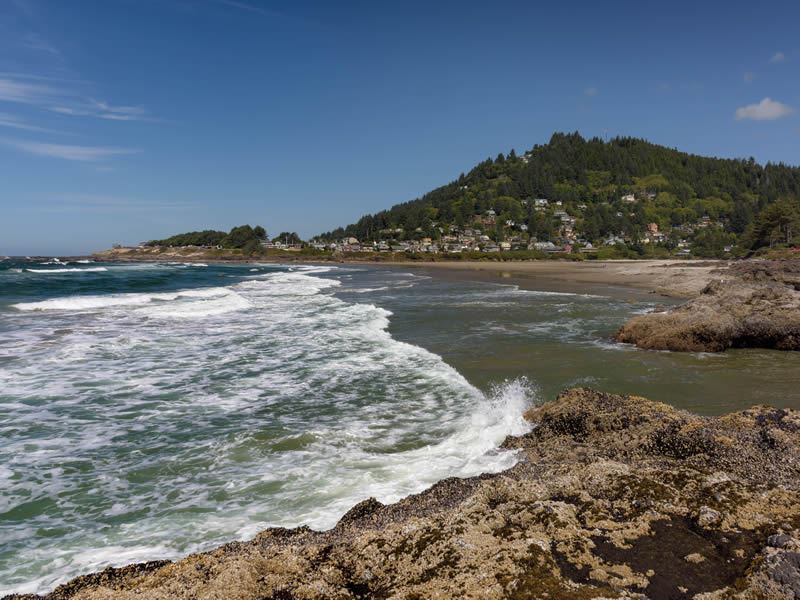 Florence and the Sea Lion Caves

Just 20 minutes south of Yachats are the Sea Lion Caves, located right along the coast and considered one of the best, and largest, places to view these entertaining animals in the wild. This privately-owned wildlife preserve protects the sea lions that are free to come and go as they like. They spend the chilly winters holed up in the cave, but in the spring, breeding and birthing time, they move out onto the rocky ledges up in front that serve as rookeries and remain there through summer. The town of Florence nearby is a popular place to rent a dune buggy and enjoy the thrill of riding the John Dellenback Dunes Trail. 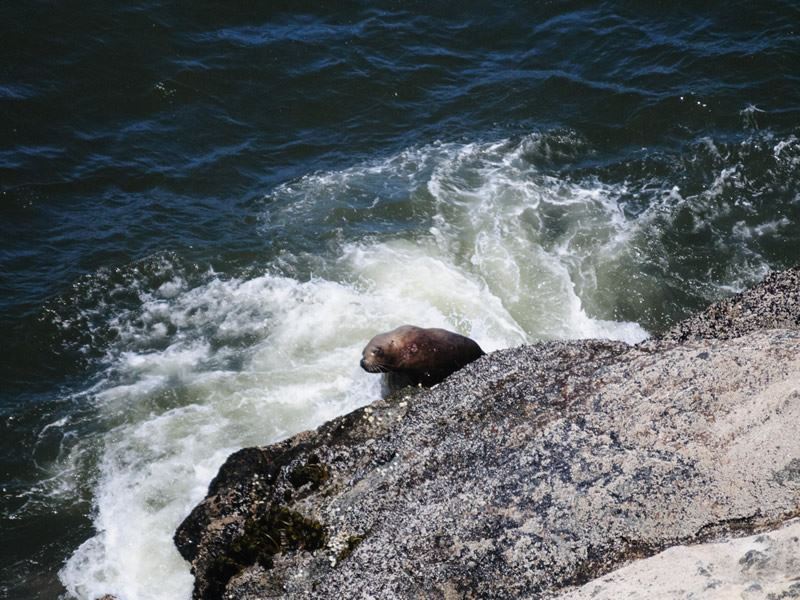 The Oregon Dunes National Recreation Area spans for almost 50 miles, sandwiched between Florence and Coos Bay. The country’s largest expanse of oceanfront sand dunes, they tower up to 500 feet, spreading inland for up to three miles, meeting coastal forests and housing an array of wildlife, particularly birds. It’s one of the top spots in the country for off-road riding, with dune buggies, dirt bikes and other off-road vehicles available for rent and then ride the extreme southern and northern sections of the dunes. The central area is closed off to motorised vehicles, preserved for wildlife with freshwater lakes dotted throughout offering more serene activities like canoeing and swimming. You’ll also have your pick of multiple scenic hiking trails that snake through forests, around wetlands, among the dunes and along the beach. 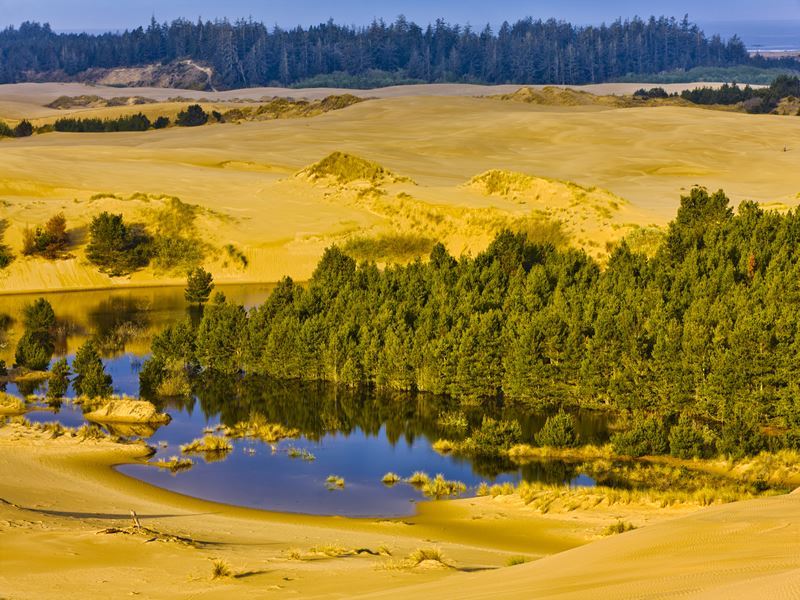 This tiny seaside town on the southern shores of Oregon is known as the “Cranberry Capital of the West Coast,” hosting countless bogs filled with the little red berries while shops sell cranberry everything, from cranberry sweets to cranberry dessert wine and cranberry ketchup. But the main attraction here, as it is up and down the coast, is the beach. At Coquille Point you can walk the paved trail that leads over the headlands to take in the awe-inspiring view of the Pacific and sea stacks that are home to all sorts of life, like murres, cormorants and tufted puffins. Gray whales migrate along the shore in season, and you might even spot orca whales in the estuary. The protected areas near the mouth of the Coquille River make this a great place for discovering treasures like seashells that often accumulate on the beach as well. 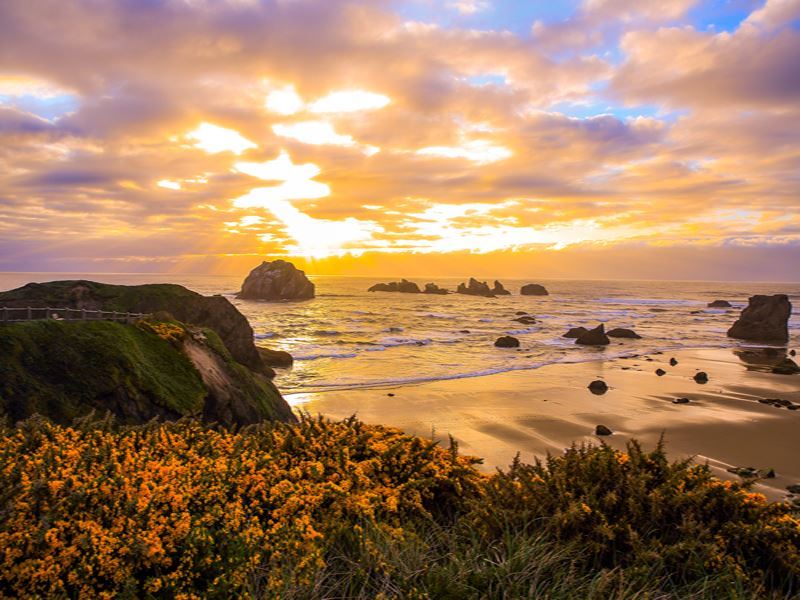 Further south you’ll drive through vistas that include fierce ocean cliffs standing in contrast to the tranquil, lush farmlands. Port Orford Heads State Park is a popular place for exploring the port’s history, with a free museum open from April through October. In the artsy downtown of Port Orford itself, you’ll find fantastic local artwork in multiple local galleries. In the late afternoon watch the fishermen haul in your meal straight from the Pacific on the west coast’s only dolly dock, with vessels launched and retrieved using cranes. That makes for some deliciously fresh seafood dinners, including the upscale, romantic Redfish restaurant and the more casual Griff’s on the Dock, popular for fish ‘n chips. 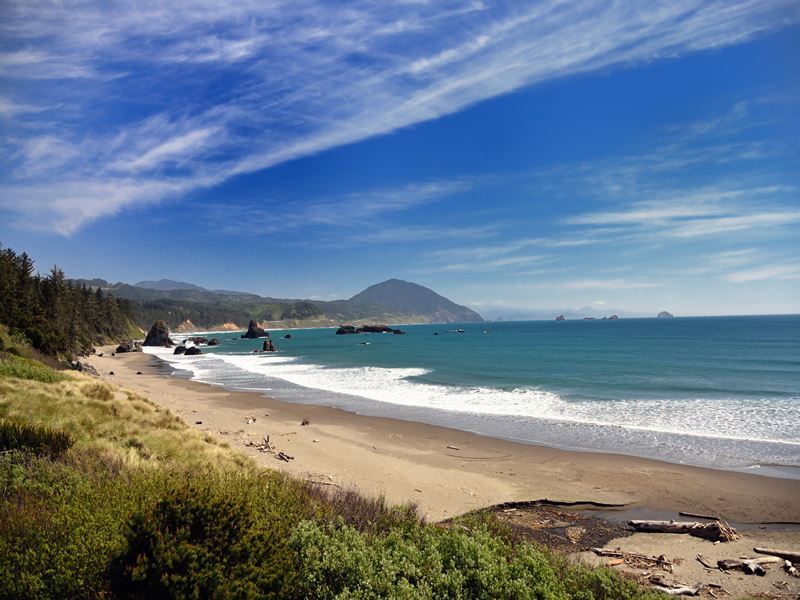 Gold Beach is one of the final beach towns before reaching the California State Line when heading south. It lies at the convergence of the Rogue River and the Pacific Ocean, making it a gateway for experiencing the “Wild and Scenic” sections of the river, including rafting, jet boating and hiking, with thrilling excursions departing from town via Jerry’s Rogue Jets. The jet boats bring passengers through the whitewater, canyons and rugged, unspoiled wilderness from early May through mid-October. Beachcombing and long walks on the beach in Cape Sebastian State Park, as well as hiking the trails through old-growth Sitka spruce forest are all popular too. Right along the main highway through town you’ll find art galleries, shops and eateries, an ideal place to end your journey and pick up a few souvenirs, including items crafted from the state’s distinct myrtlewood that grows prolifically in this area, and a variety of works crated by local artists. 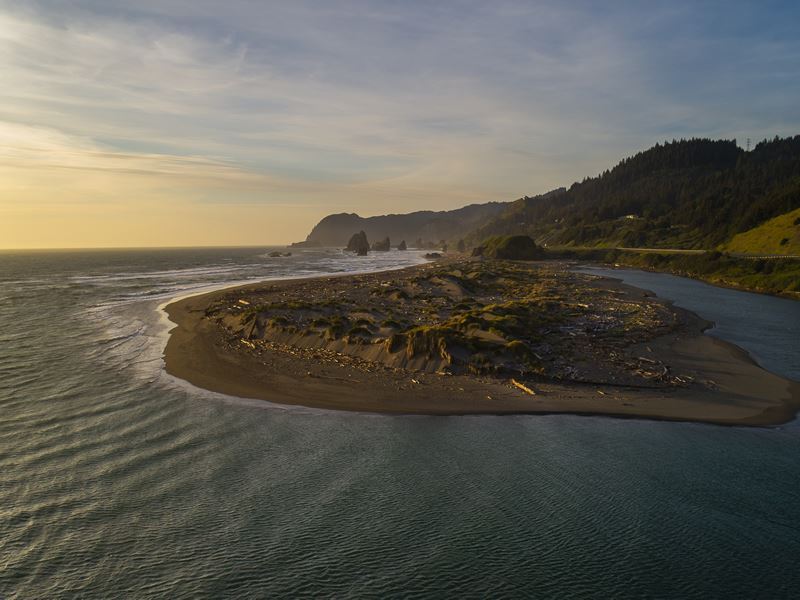 Wonders of Oregon by Motorhome

Pacific Northwest and the Canadian Rockies