A true taste of Kentucky

Wholesome, comforting and rustic, the traditional cuisine of Kentucky tastes like home and brings natives back to the Bluegrass state with every bite. And while the most popular classics can be found the width and breadth of the state, each individual region prides itself in its distinct food culture and the tempting dishes that create its backbone. 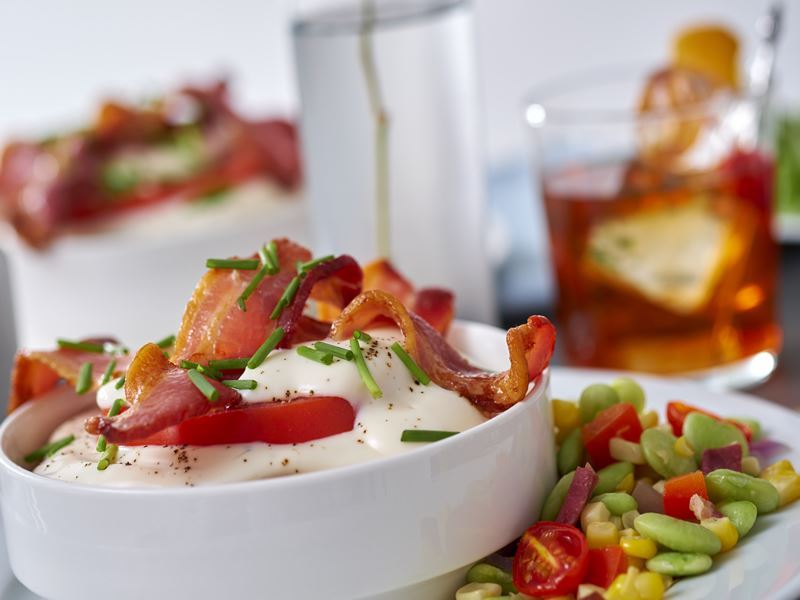 Each drink, main course and dessert that’s iconic to a specific region is a true reflection of the Kentucky’s gastronomic traditions which can be traced back centuries. As well as local ingredients and cooking techniques, these culinary celebrations represent the history of the time and the people who created them. 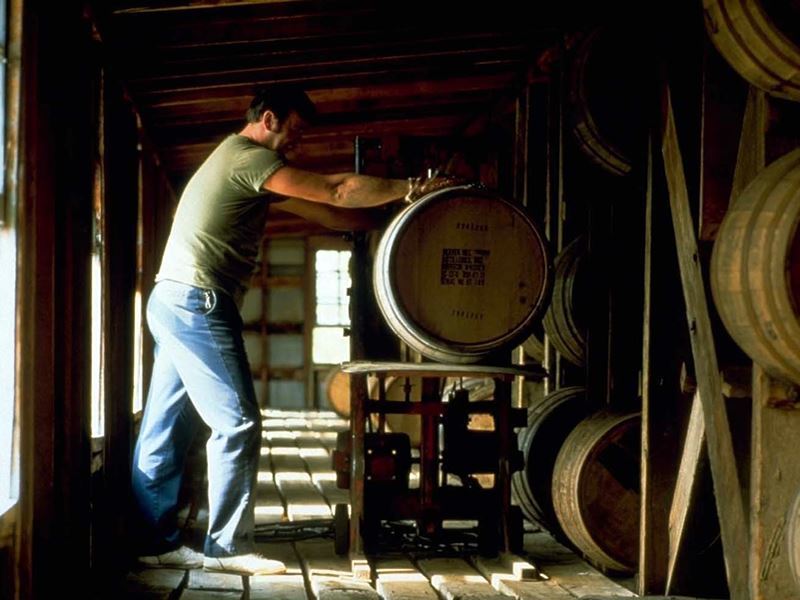 From homecooks serving their family the same recipes that have been passed down through generations to executive chefs taking time-honoured dishes and revamping them with modern ideas, food is celebrated just about everywhere in Kentucky.

The history of food in Kentucky

Kentucky’s cuisine is a reflection of its own native culture, with influences from the religious and ethnic groups that settled in the area throughout the years. Early inhabitants, like the Mississippian people who lived in Western Kentucky in the 14th century, developed and experimented with various crops, discovering just what the land around them was capable of. By the 16th century, Cherokee tribes had a strong grasp of farming and grew sunflower seeds, squash, beans and corn to complement the fruits and vegetables they gathered, along with the game and fish they hunted.

Culinary diversity was introduced in the 17th century, when people from Africa introduced Kentucky to black-eyed beans, okra, collard greens, watermelon and yams. Many of these ingredients were so popular that they still feature in classic staple dishes today. The first Europeans landed in Kentucky in the 18th century, contributing a huge assortment of ingredients to the local diet. English, Scottish and German settlers introduced pigs, cows, chickens, turnips, cabbage, peaches, apples and apricots to the locals.

The 19th century was a big year for food in Kentucky. During this century, Kentucky cooks began to publish books, sharing their culinary achievements with people across the country. These books inspired people far and wide, so much so that at the start of the 20th century, homecooks made a lot of their basic ingredients from scratch — churning butter, baking bread, canning beans and curing meats. Growing fresh produce, before preparing and preserving it took up most of the average homemaker’s time and energy, which is possibly why locals are so proud and fond of their local dishes and foodie history today.

Before reliable preservation techniques (such as fridge-freezers) were available, local Kentucky people used to make the most of fresh summer produce. Families would dig into plates piled high with collard greens, tomatoes, lettuce, onions, peppers, cucumbers, cabbage, peas and carrots. Aside from root vegetables, there was little fresh produce available during the winter months, so alternative preservation techniques were put in place to make the summer goodies last longer. Winter dishes would be accompanied with pickled cucumbers, dried peas and chutneys, as a way of adding more vitamins, minerals and flavours to plates.

Thanks to today’s modern food preservation and growing techniques, Kentucky enjoys fresh produce all-year-round. And despite the increase in popularity of fast food, quality restaurants that specialise in traditional southern recipes, farm-to-table dining and local, seasonal produce are booming. Kentucky’s food scene has come along way since the 14th century and from where we’re standing, the state has still got a lot more in store for foodies. 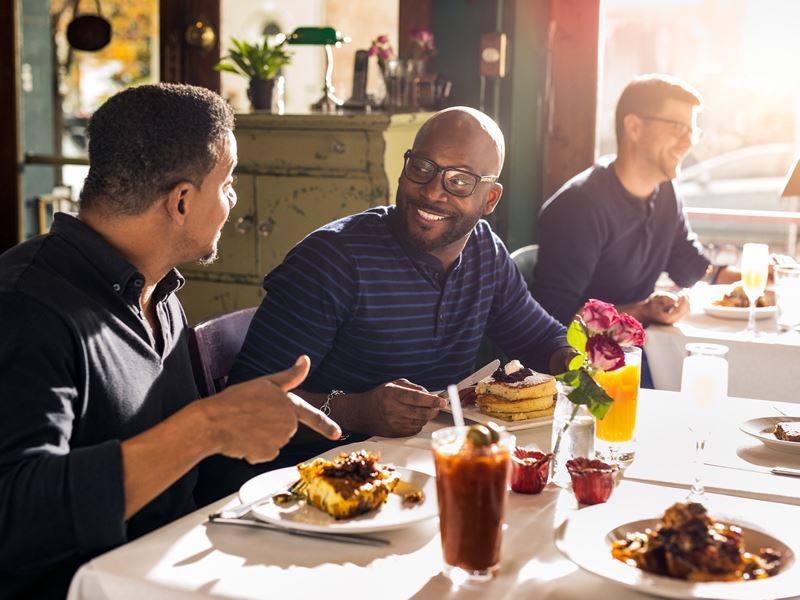 You don’t have to sit down at a table to enjoy Kentucky’s bounty of culinary delights. The Bluegrass state hosts a wide variety of foodie festivals throughout the year, inviting you to sip and savour the offerings of the South.

A seven-day spectacular that celebrates the spirit of Kentucky, the Kentucky Bourbon Festival is made up of more than 30 events that focus on the art and history of distilling bourbon whiskey. From educational talks, art workshops and food trucks to music concerts, barrel relay competitions and bourbon tastings, this event’s programme has got something for everyone, regardless of your stance on whiskey.

Barbecue on the River

Indulge in over 36,000kg of slow-cooked pork and fall-off-the-bone chicken at Paducah’s Barbecue on the River. A community charitable event that attracts hungry carnivores from all over the country, this food festival is spread out over three days, with 35+ local barbecue teams whipping up some hearty, caveman-inspired eats. Throw into the mix lively entertainment, craft fairs and a charming downtown setting and you’ve got yourself a fantastic day out for the whole family.

From goetta pretzels and goetta pizzas to goetta burritos and goetta donuts, you’ll find goetta everything at Glier’s Goettafest! A throwback to Kentucky’s German and southern roots, the spicy sausage is the star of the show, with live entertainment, family-focused games, children’s activities and sports competitions coming in as close runners up.

The food in Kentucky is as much a part of the place as its land and people. Here’s a selection of the state’s most traditional dishes that have been making appearances of family dining tables and highly-acclaimed restaurant menus for as long as the locals can remember.

Similar to Irish stew, burgoo is a hearty, spicy stew usually served alongside cornbread or corn muffins. Traditionally, it was made using whichever meats were available at the time (game birds, venison, opossum, squirrel and racoon) but today it’s typically made with a mixture of chicken, beef and pork. The meats are slow cooked alongside vegetables like butter beans, celery, carrots, sweetcorn and onion to create a filling, wholesome dish that’s perfect for digging into at big gatherings. 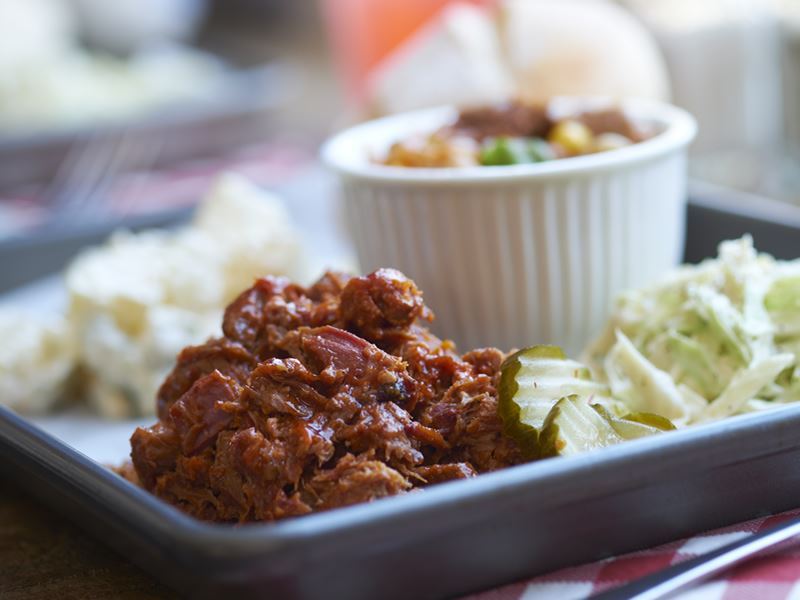 A classic Bluegrass snack, beer cheese is pretty much what it says on the tin. Enjoyed between families during the holidays, this comfort food is made by combining a strong, sharp cheddar cheese with just enough beer to add texture and flavour. Other additions, such as garlic, mustard, cayenne pepper and horseradish are also used to give it an extra punch. Much thicker than a fondue-style cheese, beer cheese is served cold and perfect for spreading on soft pretzel rolls or scooping up with crudités. 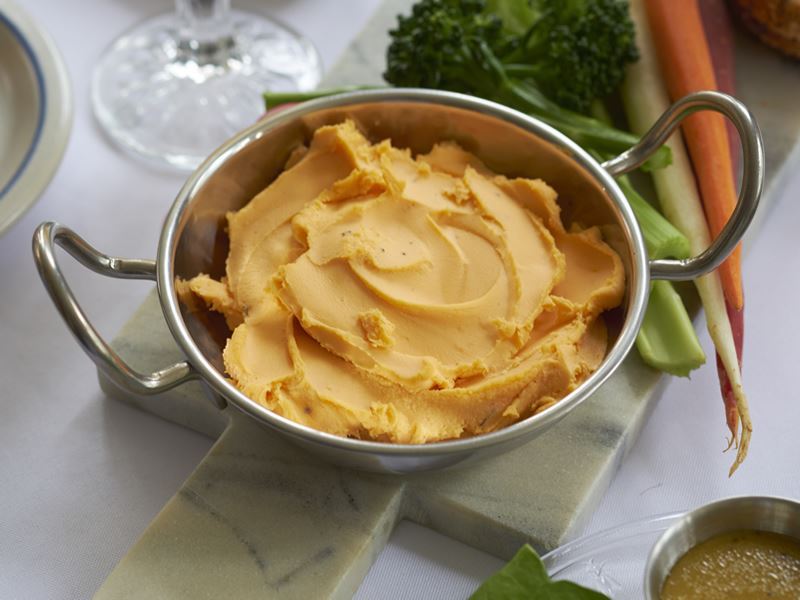 Dating back to the late 1700s, when German immigrants settled south of the Ohio River in Kentucky, goetta is a combination of beef, pork and oats. This mix is slowly simmered in a saucepan until thick then left to chill in a loaf tin before being sliced and fried like a pancake until crispy golden brown on the outside. It’s a simple peasant dish that was designed to make the meat stretch as far as possible, while also filling up hungry bellies. Most commonly served alongside eggs for breakfast, goetta is also found in sandwiches and as a topping for burgers.

Much more tempting than its name suggests, hot brown was developed in 1926 at The Brown Hotel as something sophisticated to serve the 1,200 guests that would pile into the restaurant in the early hours looking for something to eat after a night on the dancefloor. The open-faced turkey sandwich is topped with sliced tomato and smothered in a Welsh rarebit-like sauce. The dish is then popped under the grill, until the bread is crisp and the sauce bubbles and begins to brown before being topped with a crispy bacon crown. Ham is sometimes used in addition to the turkey and bacon, and pimento peppers are sometimes used as a final topping.

Another dish with a somewhat deceptively off-putting name, spider cornbread isn’t named so because of what it contains, but more because of what it looks like. This staple side dish either gets its name from the old three-legged cast-iron skillets that the cornbread used to be baked in (these were said to resemble spiders) or because the cracked surface which inevitably prevails resembles a spider web. Wherever the name originates, s pider cornbread is a delicious quick bread leavened with baking powder instead of yeast and cornmeal — this is what gives the bread its characteristic yellow colour and moist, grainy texture.

A simple dish reserved for summer, when the main ingredient is ripe and juicy, tomato pie is made up of a basic pastry crust filled with tomatoes, sometimes mixed with other herbs such as basil. The pie filling is topped with a mix of grated cheese and mayonnaise or white sauce, before being baked in the oven. A sweet, dessert-style version of this recipe made with sugared and buttered green tomatoes dates back to at least 1877. When cooked this way, the tomatoes are said to give the dish a green apple pie-taste.

Known by many different names, apple stack cake is beautifully simple and historic cake with roots that go back to 19th century Appalachia. Back then, the dessert was mainly a wedding cake, made by different members of the local community each baking a seperate layer. The layers were then stuck together with apple butter or applesauce. The result more closely resembles several sandwich biscuits stacked on top of one another than a sponge cake, but it’s delicious, wholesome and rustic. 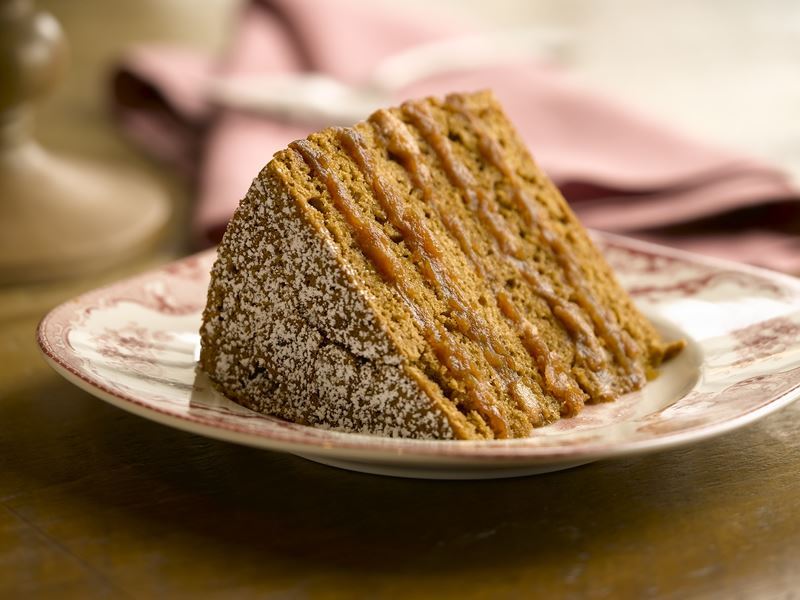 Booze-filled bite-sized pieces of bliss, bourbon balls date back to 1936 and are the perfect sweet end to a delicious meal. The creamy centre is made up of a combo of bourbon, butter, sugar, chopped pecans and chocolate which is rolled into spheres and dusted in icing sugar or dipped in melted chocolate. They may be small, but just one or two bourbon balls is packed with more than enough sugar to satisfy anyone’s sweet tooth. 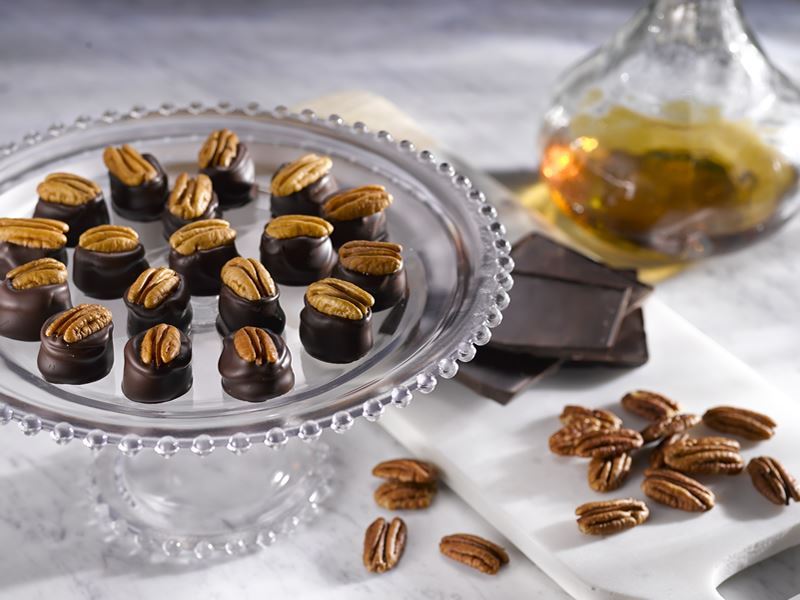 An iconic cocktail that makes an appearance at every Kentucky Derby, the mint julep is a simple, yet delicious drink. The original version is made by muddling mint leaves with simple syrup and bourbon, before pouring the whole thing over crushed ice and sipping. But there are plenty more inventive varieties out there, too. Ingenius bartenders have been known to jazz it up with blackberries, basil, peaches and jalapeños — whatever’s at hand that can add an extra layer of flavour or colour. 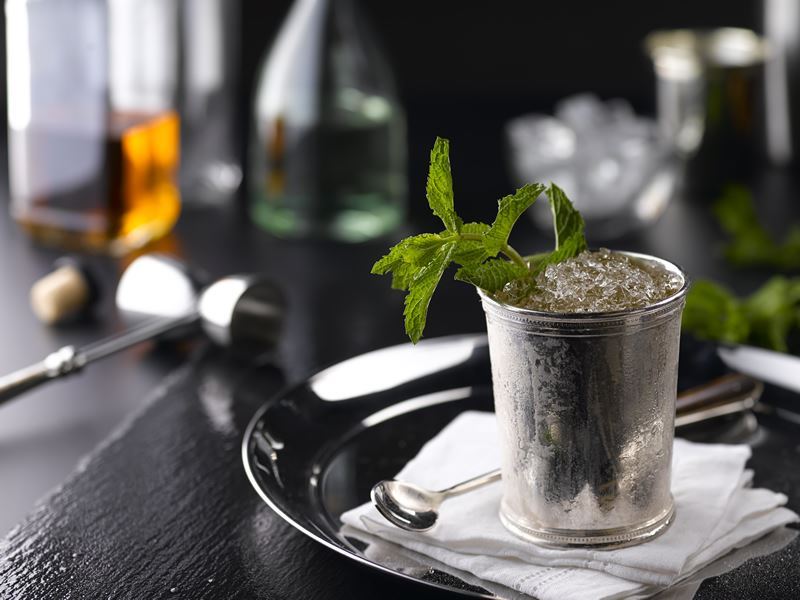 Easy and quick-to-make, the famous hot brown is the perfect soul-warming lunch to make on a chilly autumn day. 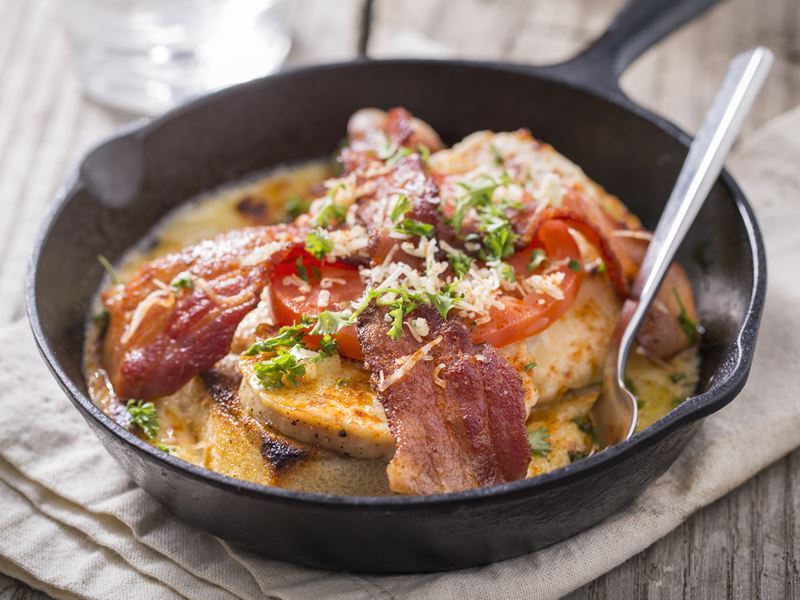 1. Preheat the grill and melt the butter in a saucepan over a low heat
2. Stir in the flour into the butter until the mixture is smooth and there are no dry pockets
3. Whisk in the milk, salt, pepper, Worcestershire sauce, cheddar cheese and half the parmesan cheese
4. Leave to cook, stirring constantly, until the sauce is thick and bubbling
5. Place the toast on a baking tray and top each slice with a piece of turkey. Evenly pour over the hot cheese sauce
6. Top each piece of toast with a tomato slice then sprinkle over the remaining parmesan cheese
7. Place the baking tray under the grill and cook for 5-8 minutes, until the sauce is bubbling and it’s turned a light brown
8. Remove the sandwiches from the grill, top each with a slice of bacon and serve immediately while hot

The Sumptuous Soul of America